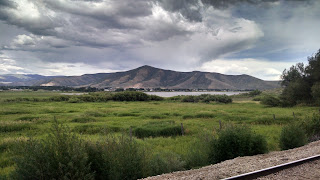 I signed up for the Dam 15 Miler back in December sometime.  I am on the email list for Extra Mile Racing and around Christmas time they sent out some incredible offers -- basically 50% off the cheapest price off nearly all their races.  So with an offer of somewhere around $25 I couldn't refuse doing this race.  Even if I opted out because of other commitments or injury, I figured the $25 would be worth the risk.

Little did I know what I was getting myself into....

Running a race that starts at 6pm is always a challenge.  You have to time your meal just right -- eat too much and you go to the starting line bloated... eat too little and you run out of gas.  I had a pretty decent sized lunch at about 1pm and snacked on fruit as the hour got nearer.  This seemed to work out for the most part and I think I came to the starting line feeling good.

I carpooled with a friend of mine and we left around 4:15 -- figuring it would take about an hour to get to the race.  Because of a missed exit off the freeway by a certain navigator (me) we wound up getting there at about 5:40 (and thankfully we didn't miss any more turns).  Luckily this was a tiny race and picking up our bibs took a minute and using the bathrooms took a few minutes more.

We had just enough time to fill our hydration packs, get the GPSs fired up, and I was able to snap a few pictures of the surrounding area before the race sort of informally started at about 6-ish.

I didn't have a lot of expectations of myself on this race.  I knew that there was going to about 1500 feet of elevation climb so the course was going to be challenging.  I simply wanted to run 15 miles as strong as I could without killing myself, enjoy the views and see some territory of Utah I haven't seen before.

Also the race was incredibly small.  If they had more than 75 people (combined for the 15 mile and the 10K) I would be surprised.  I wasn't sure if they were doing age group awards (turns out they weren't -- just the top 3) so I just promised myself not to get too worked up if the going got tough.  This was less about my time and more about the experience and logging some challenging miles.

The trail was about 8 feet wide and throughout the race it was crushed gravel and dirt with the occasional fist-sized rock thrown in.  I didn't take my camera with me because I didn't feel like taking on all kinds of hills while carrying my phone.  Also, on trails I tend to be a total klutz (which I almost took a spill on) so I pretty much went without everything except my FuelBelt.

The race was mostly unsupported.  Meaning you had to carry your own fluids.  They did have a cupless water stop at mile 3.1 but he was still setting up when I got there and I still had a full FuelBelt.  At the turn around (about mile 7.6) they had fruit, Chomps, and cold water.  I had only gone through one flask so I spent about 15 seconds there refilling it -- which I am glad I did.  I also refilled that flask upon my return at about mile 12.

There aren't many flat sections of this truly awesome course.  Again, I didn't take any pictures but I was basically running on the other side of this lake:  (Google Map Link).  And almost immediately the course went into a nearly mile long ascent.

I was extremely conservative going out.  I had studied the course beforehand and I knew it was going to be hilly.  Couple that with the fact that the first 4 or 5 miles left you exposed in the sun.  In fact, around mile 5 or so I was seriously considering turning around and bailing out.  I just felt extremely warm and I was worried whether I could tolerate another 9 or 10 miles of this.

Blessedly, though, the course went into heavy shade for about 1.5 miles until we reached the turnaround, which was in the parking lot near the Deer Creek Reservoir Dam. 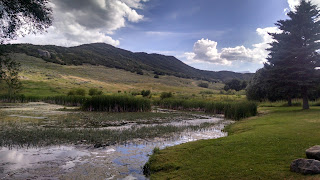 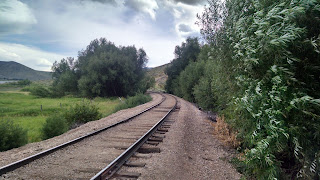 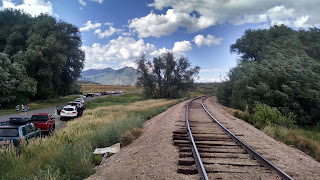 By the time I was heading back more of the course was in shade because the sun was setting to the west behind the Wasatch Mountains and being that I was hugging the west side cliffs, it blocked the sun.  I also got a bit of a tail wind.  By the time I finished it was getting to be twilight and actually fairly cool.

Almost from the get go I was running solo.  About half a dozen guys took off in the lead pack and I was running with another guy.  He started to sputter in the early miles and I wound up passing him around mile 2.5.  The second place girl wound up catching me around mile 5 or 6 and we wound up playing tag with one another for most of the race.  I pulled away a bit at the half way point and she caught me while I was walking up a hill (yes some of the hills were that bad).  She got on my case about walking (in a friendly way of course -- as I had seen her walking hills too) and after that I pretty much took off and got on my high horse.  It was nice to have someone motivate me like that.

I tried catching another guy who was about 1/3 to 1/2 of a mile in front of me but he had a good lead on me and I just didn't have a second gear.  We talked after the race and he said he was constantly looking over his shoulder for me and was worried I was gonna catch him.

Upon crossing the finish line, I grabbed a finisher's medal . I noticed that the top 3 finishers were walking around with envelopes so at that point I knew there wouldn't be any age group awards.  I was bummed about this, but being that this was a tiny race I sort of half expected it.  I figure I was in the top 7 males, maybe even higher.  But again, there were probably only 40 runners in the entire thing (it was nice seeing all the runners on this out and back course and people were very encouraging).  I had a few comments from people who said I was looking strong and running well, which is nice.

Post race, food consisted of Diet Dr Pepper, water, and bananas.  Apparently they were making campfire smores.  I walked off the run and grabbed a pair of bananas and a Dr Pepper, which kept me up half the night, but it tasted so good.

I did go through my entire fuel belt (about 28 ounces of Powerade), a gel, and 2 flasks of water.  I wore shorts, tank-top and that's about it.

My phone was locked in my driver's car so as much as I wanted to go back out onto the course and take a few shots, I couldn't and by the time they got back it was pretty dark.

Most people agreed that the course was exceptionally beautiful and I'd have to agree.  Unarguably this was in the top 10 of the most jaw dropping courses I've run.  It would also be in the top 10 for toughest courses too.  I almost wonder if they wanted to name the course "Damn 15 Miler".

I definitely want to go back out there and do this course as a training run.  The views of the reservoir and the Heber Valley were outstanding.  For the price I'd do this race again, but I wouldn't pay full price.  I suspect the race director might've made cuts in the race due to the low turnout.  Utah racing is really saturated and I suspect some constriction of the races is long overdue.

I am reasonably happy with my performance as well.  I felt strong enough at the end to run a few more miles and was almost tempted to do so.  This is a good sign that my training endurance-wise is working out.  I also persevered with the heat and the rolling hills and wound up finishing stronger as a result.  Hopefully they post the official results soon.
Posted by Eddie Gaul at 10:00 AM