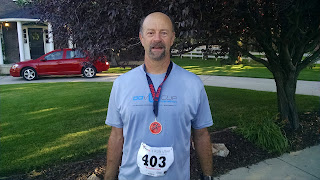 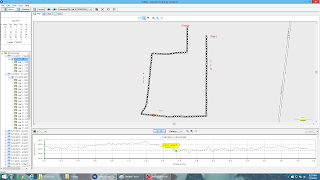 This week was intended to be a massive weekend of running short races.  Plans changed though.  I had a very stressful week and it seemed to get progressively worse as the week went along.  In fact the last two days I retreated into my house and just sort of hid out.  Sometimes life gets that way and this was "one" of those weeks.

Earlier in the week I had registered for the Draper Days 5K -- a super competitive race about 10 minutes drive south from my house.  My plan was to run the South Jordan Glowstick 10K on Friday night (11pm start time), wake up and then run the Draper Days 5K on Saturday morning and then spend the rest of the day sleeping.

With my energy completely zapped on Friday night, I went to bed somewhat early and begrudgingly made my way to the Draper Days 5K. 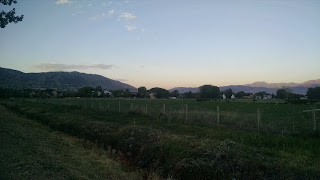 
To say I was in the mood race would be a huge mistake.  I struggled through my warm-up despite not having run since Wednesday and I just felt heavy and lethargic.  As I was in the start line I secretly began to doubt if I would be able to finish this in sub 25 minutes.

But I also know myself -- once the race starts I slip into another mode and sure enough that is sort of what happened.

I didn't line up too close to the front and since this race wasn't chipped time I got hemmed in by a bunch of slower folks.  It wasn't terribly but it did make me reign it in the first half mile or so -- which was fine by me.

The course's mile markers were spot on -- at least according to my Garmin.  I was a little surprised to see myself go through the first mile at 7:49.  A little too slow by my standards but I felt like I had a lot left in the tank.

I also sort of felt like the first mile was downhill.  I didn't know too much about the course at all and I was a little worried as the drive in had some rolling hills. However, I am happy to report that this is a fast course.  The first mile was entirely on city street.  We ran about a mile before going down a residential street.

The second mile I found my gear and really started to push it.  I wound up passing a few people and was feeling pretty solid despite my initial apprehension about even if I was able to finish this race.  Usually I ran the first mile fast, my second mile medium and crawl to the finish -- this race I started slow and picked up the pace and my second mile was pretty solid.

The third mile is when I really started to struggle (of course).  I had been tailing a friend of mine that I've known here since 2012 (and haven't yet seen this year) and I had hopes of overtaking him.  Sadly, I just ran out of gas and running up a slight incline with the sun in my face just seemed to take it out of me.  Half of this mile was on the local bike trail, which I had used for my warm-up, so I thankfully I could gauge how much longer I had to go before the finish line. 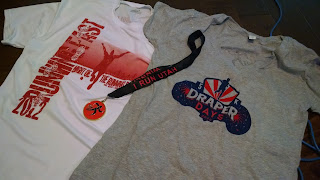 Since I had registered late, I wasn't guaranteed a t-shirt.  It was sort of a free for all with all the remaining shirts.  I wound up scoring a woman's extra large which I know someone at work who would want it.  They also were giving away a ton of older shirts and managed to get a 2012 tech shirt for a race I didn't run.  I know, I don't need any more shirts, but heck I wanted something to remember the race by (and to get for my $30).

I also got a pretty nice finisher's medal.  It is heavy duty too and has the race date on the back.

Performance-wise I did better than I expected to.  Believe me, I was D-E-D (dead) on my feet at the race start.  I just felt half asleep and literally exhausted.

The race finish had water, bananas and grapes.  I think there was a bread maker there too giving out samples.  About par for an affordably priced ($30) 5K.  They also had a TON of bathrooms, being that Draper Days is a full-on city festival.  So using them was super easy with zero wait.

This race is super competitive and features some of the areas top runners, so I also knew going in that for me to place would be a huge feat.  I was surprised to see on the initial printout that I had placed 6th in my age group.
Posted by Eddie Gaul at 8:10 AM