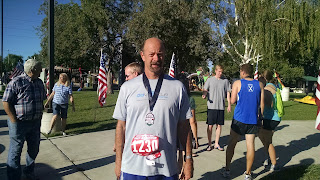 I did the Handcart half marathon back in 2012 when I first moved here.  I think at the time I was cranking out about a half marathon a week and with not a lot going on at the time (since I was new to Utah) I was just running races non-stop.  So back in 2012, it was like my 4th half in 5 weeks (or something crazy like that).

Being that today, July 24th, is Pioneer Day in Utah -- where most state employees get the day off, I opted to take a half day off from work and do the race.  I should've registered a bit earlier as the race set me back $50 but I wasn't sure if I was going to be able to take half a day off due to constraints.

Pioneer Day is a celebration of the arrival of the first Utah settlers back in the 1800's.  It is a big deal here and many people have the day off.  To commemorate the event, there are a TON of races today, including a full marathon. 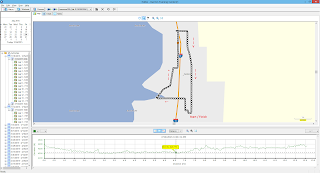 First off, I slept terribly the night before.  I think part of it was race anxiety and part of it was work anxiety.  My mind wouldn't shut down.  It wasn't until after midnight that I somehow managed to eek a few hours of sleep.  My cursed alarm went off at 4 AM and I managed to shovel down some food before taking off to Bountiful and the ripe old hour of 4:45.

I've been a ton of the South Davis Recreation Center races before and they tend to be very affordable and have LOTS of perks.  The Handcart Half Marathon is no exception.  They have a really nice shirt, finisher medal and the awards are super sweet.  Also they had a really nice pancake breakfast and a lot of local vendors were there supplying samples. For a small town race, this feels like a big-time event.

The race started off pretty easy enough and my goal was to hit 1:50-ish or better.  Being that I am on a high mileage week, I wasn't sure how my legs would respond.  Would I get tired at mile 8?  Would I be able to push through?

I also had forgotten how many hills there were in the last 5 miles (I also confused this race route with another one I ran in the area back in 2012).  Either way, there wasn't a whole lot of "new" course on this one... I've run various chunks of it in many of the races I've done in that area before, so that certainly helped with my racing strategy.

The first 2.5 miles are on city streets.  Eventually you make it to the Legacy Bike Trail which is a pancake flat bike trail hugging the Legacy Freeway.  I really enjoy that bike trail and it makes for a good race.

Around mile 7 you climb a freeway overpass, cross a pedestrian bridge over the Legacy and I-15 before heading down a fairly busy road in Farmington (then through Centerville) before coming to Bountiful some 4 miles later.

The first 7 miles I was spot on for hitting 1:50. In fact, at 6.55 miles, I looked down at my watch and saw 49:50.  The pacer I had latched on to had hit his time, despite having to stop and fill our own water cups at the second water station.

However, the course gets a lot more difficult almost immediately at mile 8.  The freeway overpass climb is a pain and just as you coming down on the other side you have to ascend a hill to get to S 200 E.

Here you are on a tilted road lined at first with stately houses which finally turn into a thriving business area.  Unfortunately this also has a lot of rolling hills.  So you do get some downhills, but there are certainly some hills that will slow you down and if you aren't prepared for them.  The tilted road was a nuisance and many runners opted to run on the sidewalk.  I would certainly hate to train on this section of road -- it is an injury waiting to happen.

The last mile or so follows the 5K course and that mile is always a beast.While the true elevation isn't much, it is just a steady grind up hill.  Also the sun was blasting on me -- while it wasn't terribly hot, I was doing the final mile plod up it. 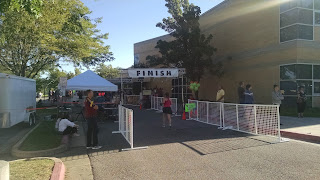 The course support was fantastic.  They had a TON of water stops (I think about 6 or 7) and other than the second one, they were well manned. They also had the important intersections handled by traffic enforcement as well.  Just a really nice run race.  Mile markers were off in spots but the course measured exactly 13.1 on my Garmin. 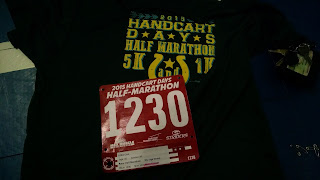 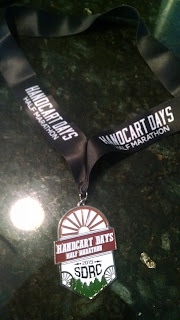 I really like the green t-shirt.  I don't think I have any of this color and it is loud and proud.  The finisher's medal is also good and is of their standard design.

They had some very awesome age group awards (which I was fortunate enough to win one in 2012) and the overall awards were really awesome.  The handcart wheels look like they were hand built and the overall ones were just huge. 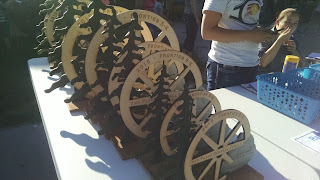 After the race I milled about chatting with random people (I met a lot of families who came out to do the event together, which is nice to see).  Corner Bakery was giving away samples so I had a super yummy chocolate muffin (although my stomach rebelled at first) and some oatmeal breakfast thing.  My bib also got me into the pancake breakfast.  This was part of the community event as well so some non-runners were there too.  I guess they went through 220 DOZEN eggs and I saw many sacks of pancake flour.  With a 1K and 5K race, this was definitely a family-style event. 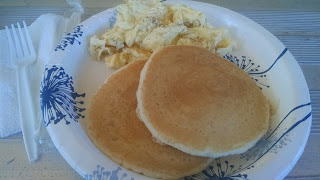 Realizing I wasn't up for any awards I did check out the carnival area and took some pictures of the exhibits.  I can't imagine walking across the salt flats or the United States with my belongings in a cart: 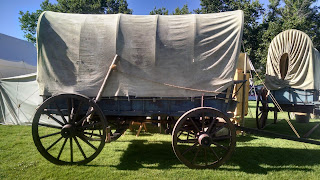 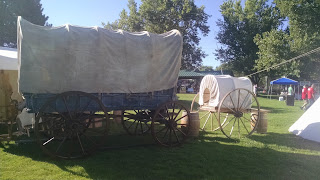 I am a little disappointed with my time.  I definitely felt like a 1:50 or less was reasonable. But I do have to remember the final 5 - 6 miles were hilly and it was warm.  Two of my weaknesses is heat and hills and I tend to do poorly in those situations.  While I've certainly run worse in terms of courses, this one is definitely a challenge.

Again, I love the South Davis Recreation Center races.  They do a stand-up job and don't charge you an arm and a leg to do them.  Since it is also a gym, they have clean bathrooms to use before the race as well.  I am certainly glad I took the opportunity to run this one.
Posted by Eddie Gaul at 9:39 AM