Well in my quest to get faster, I found another race to do: the Salt Lake City Track Club's 15K Winter Race, held in Magna, Utah, about 10 miles west of the airport.

This race is part of a series of races put on by the track club.  Initially it starts out with a 5K, then a few weeks later, a 10K and finally the series wraps up with a 15K.  I was out of town for the 5K and for some reason didn't do the 10K but for $33 I got into the 15K.  Also, the 15K is also a USATF state championship race so to say there were some fast runners there is an understatement.

The race is held at the Salt Air Pavilion and it runs east for about 4.5 miles and then you turn around and come back. The race is run along side the I-80 freeway on a frontage road. This is the second time I've raced on this course and despite the views of the mountains, the city and Great Salt Lake, it is probably my least favorite place to run.  It is just one seemingly endless road that just doesn't offer much variation.

For some additional pictures of the surrounding area check out more shoreline run and my race recap of the Salt Air Half Marathon. 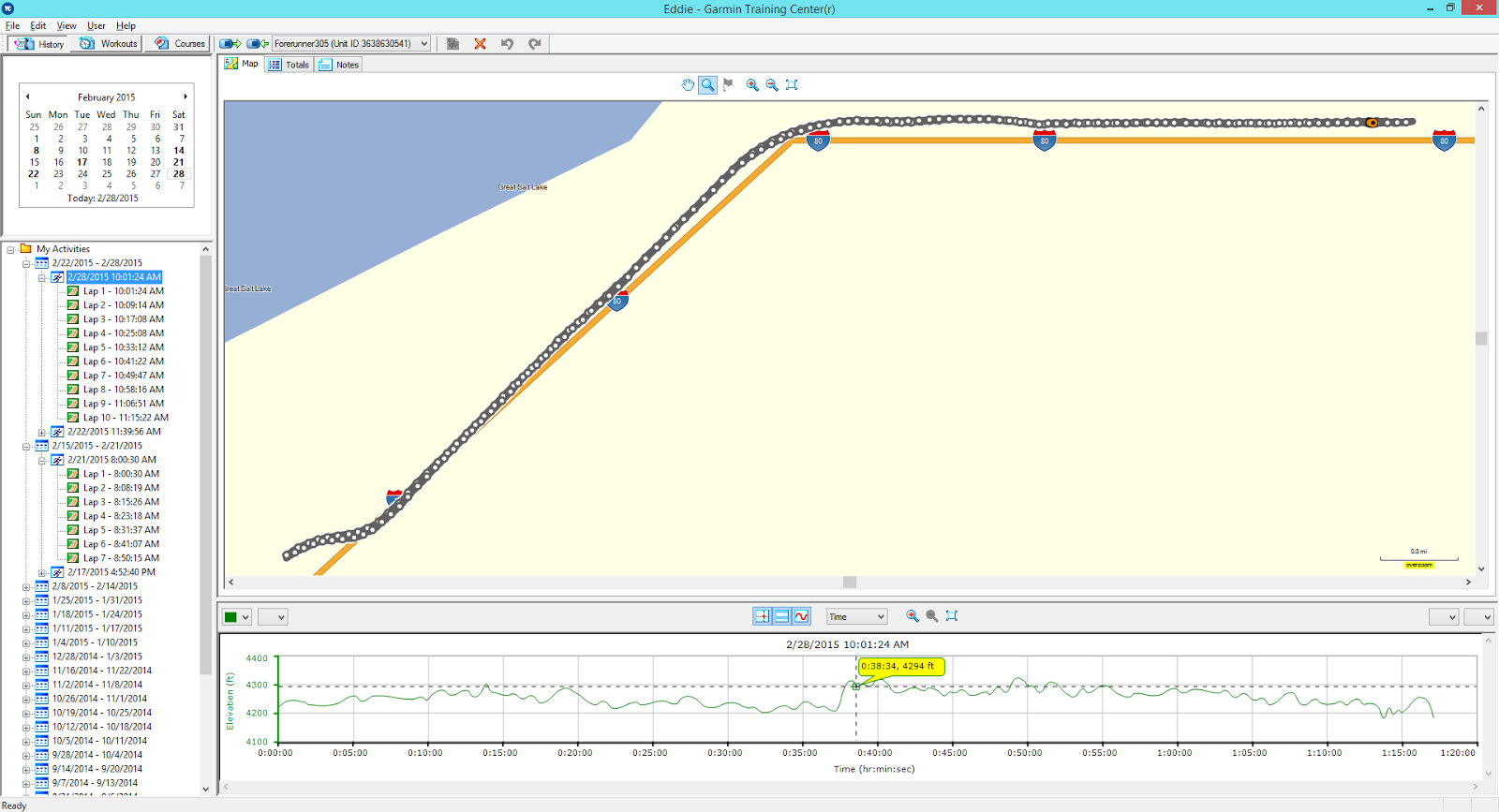 
The race is a bit of a later starter.  Normally the weather is pretty cool here this time of year, but this winter has been mild and with a 10AM start I rolled in around 9AM.  I got my shirt and my bib and wound up sitting in the car listening to music and taking the occasional picture of the morning skyline.  I used the facilities a time or two (thankfully the race headquarters was at the pavilion so there were flush toilets.

I wound up warming up for a bit with some drills and leg swings and chatting with the occasional person I knew.

This course, unlike my last race, is pancake flat.  While I am running at about 4300 feet, the variation in the terrain is pretty much a flat frontage road.  Less than a 100 yards away whizzing trucks and cars fly by at 75mph -- cheering us on with the occasional air horn.

My goal was to try and hold on to 8 minutes per mile and hopefully finish around 75 minutes.

I started out a little quicker than I wanted to, but at about 10 seconds per mile faster I felt I was "close enough" and I tend to always start out fast.  The initial 3 - 4 miles met with a bit of head wind.  While not terrible it was mentally taxing.  Also there really isn't much to look at except other runners and to really enjoy the views, you really need to look north.  Being that I was running east for the majority of the race it was hard to appreciate them.

I've been battling some Morton's Neuroma / metatarsal pain the past week and initially I felt like my sock was bunched up under my toes, which is a fairly common symptom.  I was tempted to stop and try and "fix" it, but I knew that it was mostly a false feeling.  I suffered through it, and it was a forgotten issue after about a mile.

I was pretty happy once I came to the half way point, although it looks like I had run about .05 miles out of the most "optimal" path.  The mile markers were spot on and since this course is used by a lot of different races, there were plenty of spray painted markings on the ground.

I really had to focus in the last 3 miles.  The tailwind I had hoped to gain the benefit of never materialized and in fact it seemed like I was running into the breeze again.  Also I found myself drifting into the 9 min / mile pace that I am comfortable with.  Whenever I saw this on my Garmin I mentally cursed myself and forced myself into a higher gear.

I did manage to lock into an 8:30 min / mile pace in the final 4 miles or so.  I still felt pretty good at the end and if I was running a half marathon my time likely would've been in the low 1:50's.

I wound up chatting with a few people after the race and making small talk.  Being that this was a fairly large race as well as a pretty elite group I knew I was out of the running for any sort of age group award.

It was sort of chilly and I wound up drinking WAY too much coffee -- something I rarely do.  To say I was wired would be an understatement.  I also grabbed a few bananas and actually was one of the last people to leave on account I was just chatting with random people (and I hung around for the raffle, which I didn't win at).

I'd run this race again.  For $33 I had a good experience (although if you sign up for all 3 of their races it is only $45 or so).  There wasn't a finisher's medal for this race, but apparently if you complete their 5K and 10K you get a wooden medal, which looked pretty cool.  The t-shirt was well designed, but it is cotton, so it will likely be relegated to the non-running days bin.

After driving about 25 minutes back home, I showered and decided that the Midvale Golden Corral was a good idea so I wound up eating there.

Overall my race finish was about what I expected.  Being that my 10K time is about 49 minutes, finishing a 15K time in about 27 minutes more isn't too unexpected.  I really faded at the end and given that this week's total mileage was a bit less because of my foot injury, I really didn't feel "on". I never race well on a week I've taken NSAIDs.  I wasn't entirely disappointed but felt that 1:15 was definitely doable.

However, I should be able to get a bit of redemption, as next weekend I'll return to the hilly east Ogden course for a 10 mile race!
Posted by Eddie Gaul at 3:56 PM