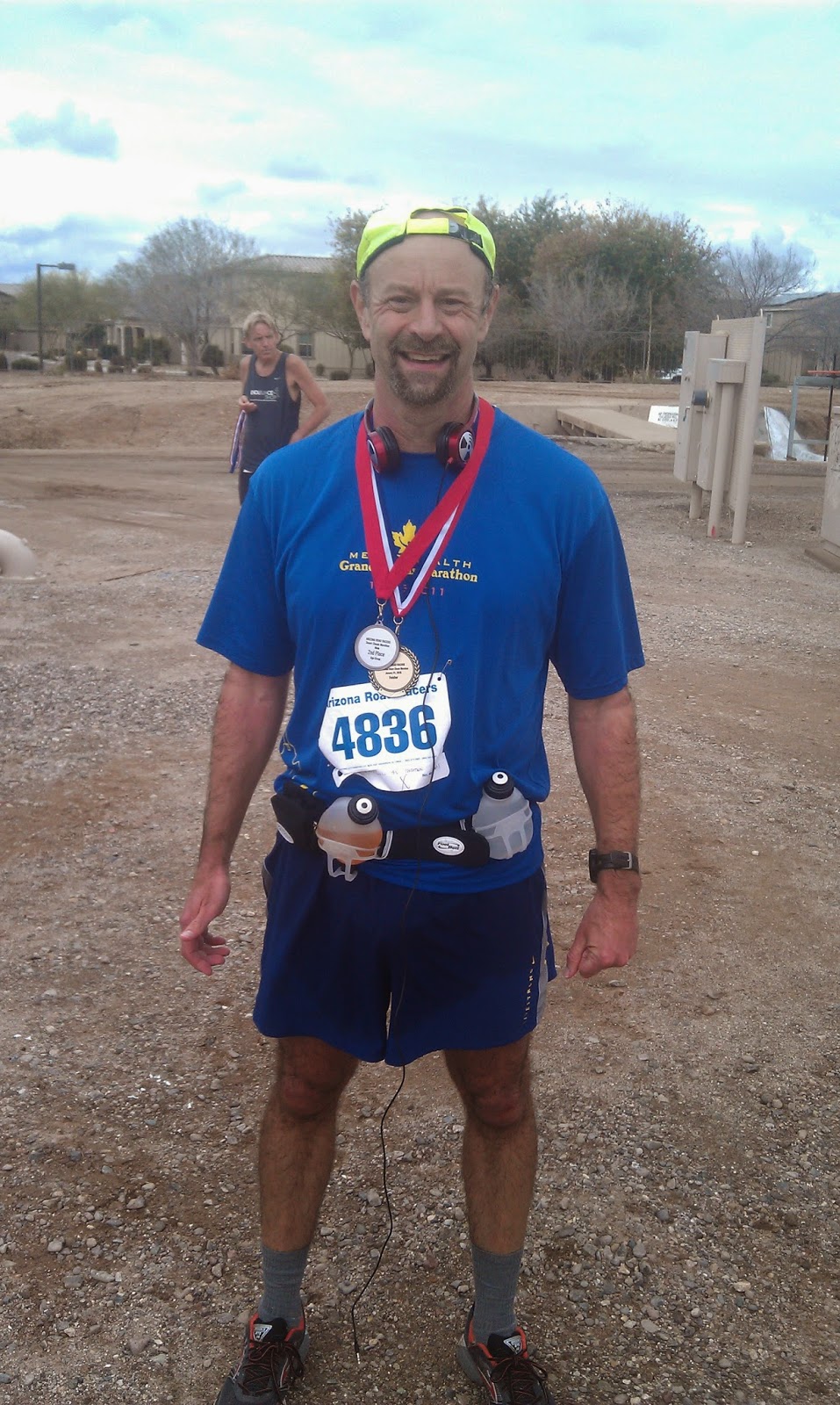 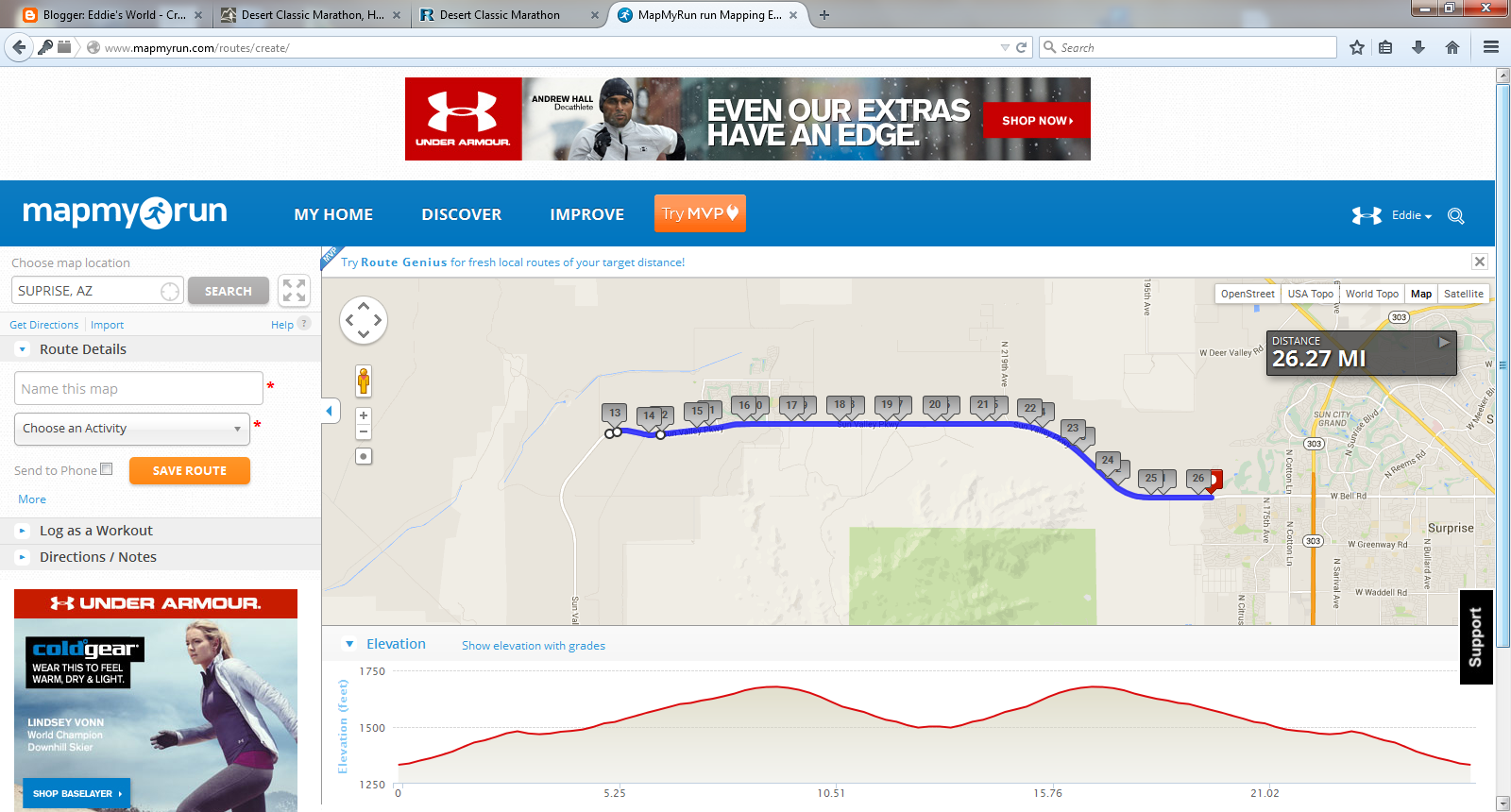 Shari and her girlfriends had been planning a trip to Arizona for a long time.  It was decided that since the Super Bowl was being played in Glendale, Arizona that everyone should come down and spend the weekend doing Arizona related things.  Once the date was settled and carved in stone I hit marathonguide.com and searched out for a marathon.  Lo and behold, I discovered a very small marathon in Surprise, Arizona about 30 miles southwest of Phoenix.

I didn't preregister for the race, unfortunately.  I wasn't sure of the weather (it had rained all day the day before), my health or whether I'd get permission from the "control tower" to run it.  I wound up paying $95, cash on the day of.  It should've been $90 but I got the tech shirt rather than a cotton one.  This was a little pricey, but I'll pony up for a shirt that I'll actually wear and I really wanted to knock Arizona off my state's list. If I am going to actually complete my 50-state goal, I need to get rolling on it.

I actually slept pretty good the night before the race thanks to a night at my brother's apartment.  At first, I almost just turned over and went back to sleep when my alarm went off, but I had to do this run.  I ate some Wheaties, chugged some Gatorade and nibbled on a power bar before heading out the door just a hair after 5:30AM.  About 6:15 I arrived without any problems in Surprise. I managed to get one of the last parking spots.  It was still pitch dark out but it was easy to find the registration area.

By the time I got everything squared away, it was close to 6:35 and I knew I wasn't going to be able to use the porta potties.  They were only a few of them and the lines were 20 people deep.  No one was around and it was still dark.  Shamelessly, I did what I had to do.

I was in such a rush to get everything squared away that I forgot to put Vaseline on my chafing spots.  I did wind up using Gu Brew and loaded up my gels.

After an impromptu Star Spangled Banner, about 150 half marathoners and 50 marathoners headed west along Bell Road from the bingo parlor at 7AM.

I had hopes of running 4 hours but given the course, I knew that might be a tall order. I had worn shorts and a short-sleeved t-shirt.  I also put on gloves, which I wound up pocketing after a few miles.  I was worried it was going to be cold and had been tempted to wear a wind breaker, but I am glad I went with less rather than more as I quickly heated up.

The race doesn't have many flat sections, as evidenced by the elevation map.  In fact, most of the race felt uphill, even though it was an out and back course.  I am not sure what to make of it but a lot of other people also felt the same.  Imagine putting a treadmill on 1% - 3% incline and that is sort of what the entire race felt like.

There was minimal crowd support there.  A few cars passed by and either honked or rattled cowbells.  There were a few by standers with posters, but I could probably count the number on one hand.

The entire race was on asphalt and you ran on the side of the road.  It was entirely coned off and only a few times in the early miles did I feel like I was hemmed in.

To the left, was a beautiful, fog encased set of mountains.  On the right was a vast wasteland of cactus and desert shrubbery.  There was also a certain smokey smell that permeated the air as well.  The scenery didn't change much and it was only punctuated once by a Del Webb city.


The mile makers were SPOT on.  My Garmin was right on the money for all of them.  Also, like clockwork, there were aid stations every 2 miles.  They either had Gatorade or water and the volunteers there were friendly and competent. I am glad I brought my own Gels though, as they weren't stocked with anything but fluids.

I felt like I was running a bit fast.  I had confidence in my training, but I was really worried about my pace.  While I had run the first few miles where I wanted (9:40's to 9:45's) I was starting to panic because I thought I had put too much energy into going uphill.  While I didn't feel particularly winded (it is so much nicer breathing low elevation air) the marathon is a race of patience and I feel the race really begins at about mile 16.

I only stopped momentarily in the early miles to snap a few pictures.  I wanted to take a few more, but I wanted to do well, so I didn't want to waste too much time.

After the half marathoners turned around, the course really thinned out.  Up until that point, I was running with a pack of people.  Once I got past 7 miles, it got really peaceful.  I had brought my phone and put on my headphones.  I've been on a bit of a KPop music binge of late and I find the upbeat music of chick bands like SNSD and Lee Hyori keep me pumped up (even though I only understand about 50% of what they are singing about).  However, my stupid headphones have been giving me crap and the left ear bud was going in and out.  Frustrating but whatever.

I hit the half marathon point at 2:01, which I was surprised about.  One it was about 4 minutes ahead of where I wanted to be, two, just a few months ago I was racing halfs at 1:57 and most of this race had been up hill.  Had I gone out too fast?  Was I going to crash and burn?

I really hoped to pick up the pace even more as I recalled from the elevation charts that it was largely downhill.  But everytime I reached another crest of a hill, I got a brief downhill and then I had to climb again.  Mentally, it was really devastating to me, because I expected a lot more of a downhill race and it never seemed to really happen.  I wasn't the only one who felt this way, but the elevation chart doesn't lie.

I really didn't start to feel "dead" until about mile 22.  I was breaking down the quarter miles at that point and while I was still running at near goal pace, my legs were tired and I was gulping down whatever fluids at the aid stations I could.  The last mile or so was really trying and I saw a walker who I wanted to pass, but I think he saw me coming and he wound up beating me to the finish line.

There was hardly anyone at the finish line.  I did get a brief cheer from the spectators and other finishers as I galloped across the finish line in 4:07.  Without going to the bathroom and taking a few pictures, I suspect I could've hit 4:05.  I talked with a few people and all of the half marathoners had already taken off.  There were probably only about 40 people hanging around.

I was hoping for a 4:00 hour marathon, but given the hills it was going to be a tall order. However, what I did get was my first major race improvement in sometime.  I finished 9 minutes faster than I did in Las Vegas, about 20 minutes faster than South Jordan on a MUCH harder course.  I haven't run a 4:07 since I did the Layton marathon in 2012.

After chatting with various people I realized I had placed second in my age group.  They were super prompt with giving out awards and I was super happy to get my first age group award in a marathon.  Granted the field was pretty small, but it was nice to come home with a bit more hardware.

I grabbed some food and somehow managed to get it down.  My stomach tends to be really touchy post race.  There was also a LOT of food left over.  Usually marathoners get the short end of the stick, but there was plenty of bananas, cookies, chips and Gatorade.  Not a lot of premium stuff, but enough to get my blood sugar back into sync.

I would've hung out a bit longer at the race, but Shari had put me on a tight schedule.  So I wound up hitting the road by noon and getting back to the apartment 45 minutes later.

I really enjoyed my experience.  Granted, it was pretty expensive, but given that I registered the day of, I guess that's the price I pay.

The race was professionally run, well supported and a good experience.  If you need massive crowd support, constantly changing scenery, or rock bands on every corner, this race is NOT for you.  It seems to be a local running race that offers a certified marathon.  I certainly wouldn't recommend traveling specifically for this race but if your travel plans take you through the Phoenix area during this weekend, this race is certainly good enough to fill your needs.

They needed another bathroom (or two) on the course.  There were only two potties and the one time I thought about using it, it was occupied.  During the latter miles I was able just to step off the course and hide behind some bushes to take care of business.

I feel pretty good post race.  I am not very sore and while I was pretty trashed the few hours after the race, I've certainly felt far worse.  I was actually able to be polite and social at an evening party with Shari's friends.

Finally, I am glad that I was able to turn in a time that was a significant improvement and it gives credence (at least to me) that more mileage is better when it comes to running a marathon.  Hopefully this is a sign of awesome things to come in 2015.
Posted by Eddie Gaul at 6:42 PM