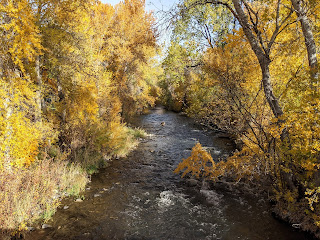 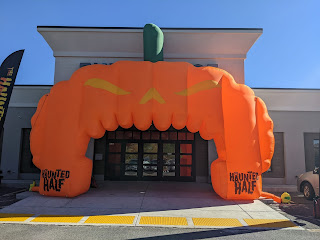 It's been a while since I've been in Provo Utah to run the Haunted 5K.  It is the sister / companion race to the Salt Lake edition that I did last week.  After having a great race there last weekend, I decided to pony up and do the Provo edition and see if I could keep the good times rolling.
The race involved a bit of extra work -- in that I had to drive down to Provo (about a 35 minute drive each way) on Friday to get my bib. Normally, I wouldn't be bothered for a 5K, but it was more or less the only race in town.  And it was a big, competitive one.  So I figured why not. With the race season ending in about a month, I figured this one would be good to do. 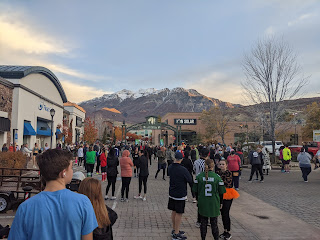 I got to the race about 40 minutes before the scheduled start (8:30).  With over a 1000 runners in each the half marathon (which started significantly earlier) and 1400 runners for the 5K, I expected to have to park significantly far away.  It wound up being slightly over a quarter mile walk from my car to the race start.  Fortunately, the weather was absolute perfect.  While the air temperature was comfortable, it was still brisk.
I wound up tracking down the bathrooms, used them and did a very brief warm-up.  I should have arrived about 15 minutes earlier. 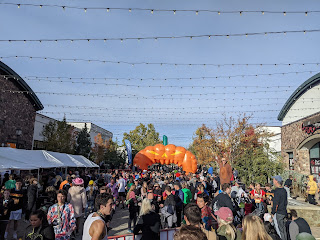 The race started a little after 8:30.  I had managed to finagle myself up towards the front.  It was congested and had a mix of those racing and those participating.  So once they started us on our way I had to weave myself around people.
The first .2 of a mile definitely was slow as we exited the well-to-do Riverwoods shopping center and out onto the service drive.  I hadn't seen too many people my age -- as this race tends to draw a lot of younger runners -- but I wanted to run fast.  I had sort of aimed for this to be an "A" level effort.
We made a loop around the mall before being dumped on a bike trail on the east side of the mall.  I was running pretty well and I didn't want to chance even wasting time looking at how I was doing.  The course was pancake flat and at this point I could go as fast as I wanted without hindrance. 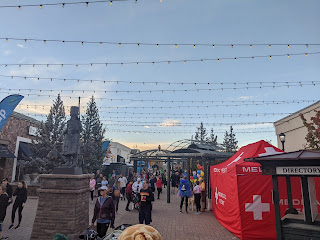 I hit the first mile just a hair under 8 minutes.  There weren't any mile markers on the course so I wasn't sure how far I had really run.  I've been having my Garmin tell me wrong information of late.
I decided to push harder.  I had spotted another guy that was probably in my age group and while I hadn't seen too many other people my age, I wasn't going to take any chances.  My goal was to keep up with him.
We hit the first aid station a little after a mile before heading back on another stretch of bike trail.  I could hear / see the mall but I knew we weren't close to being done yet.  I was hurting but I expected that -- 5Ks usually do once you start. 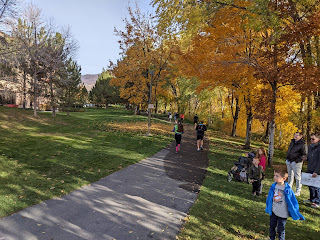 I was pleased to see mile 2 pop up faster than the first mile.  Right exactly where I wanted to be.  And to spur me on, I had passed under the 1.1 miles to go arch for the half marathoners.  Normally, I'd be worried that the course would be short, but I had measured the course using MapMyRun and I knew my Garmin usually measured short. 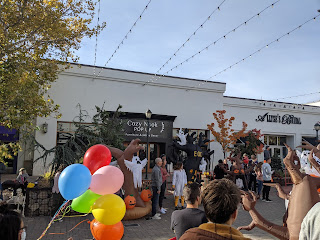 The last .75 of a mile was along a beautiful paved trail.  The oranges and reds lining the trail made it a perfect "fall" race.
The final stretch was hard to get much turnover.  My legs felt like Jello and  we had to run through a tunnel and over a cobblestone path to the finish.  There just wasn't much to go on but fumes.  My sub 8-minute mile per pace was now showing around 8:30.  I tried as hard as I could to get just finish and finish strong. 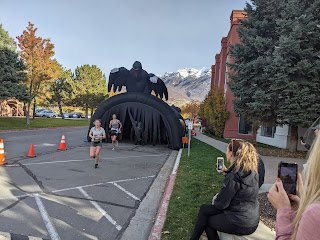 I wound up not catching the guy who looked to be in the my age group.  I just ran out of real estate to turn on the jets.  After exiting the tunnel, I made a turn and next thing I knew I was running on cobblestone.  It just didn't seem feasible to sprint along this uneven surface.
I was really worried about whether I had finished in my age group.  Could the guy in front of me have cost me an age group award? 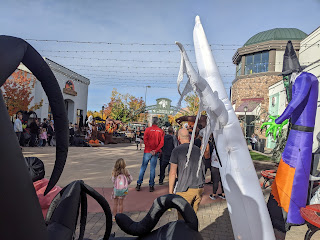 Fortunately, the answer is no.  After finishing, I got a text message with a link to my results. I clicked on it and was happy to see a 3rd place age group award.  Score! 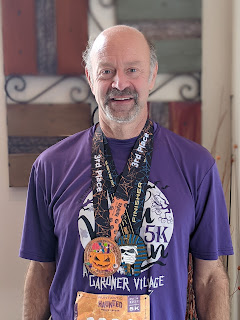 I was okay with the results of this race.  I did check several other Strava users to see this race did appear to be legit and I had pre-mapped it using MapMyRun and it had come in over 3.10.  So I feel pretty good about this race being a legitimate 5K.
I recovered from the race pretty quickly and grabbed some water and collected my warm-up jacket.  The weather was nice and I knew many people there so the time from finish to awards went quickly.
Last weekend you waited in line to get your award.  This week, they had them announced, so it was nice to get a podium finish. 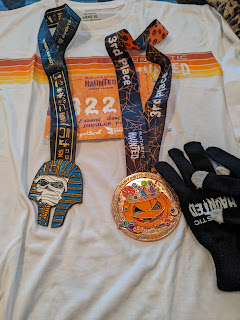 Overall, I was happy with my experience.  The race was about what I'd expect to pay for a 5K in the week leading up to the race ($35 with a coupon code).
They had a variety of post race refreshments.  Sports drink, fruit, donuts, and water.  The medals -- as usual - are stunning and heavy.  I also had a packed swag bag with coupons, samples, gloves, and a t-shirt.  I am not a fan of the 40% polyester / 60% cotton shirts, but I'd wear it for a light workout.  I also wound up picking up a legacy shirt for $3.00 at the expo.
I would definitely consider this race for next year assuming it fits in my race schedule.  My only gripe was the long drive to the packet pickup on Friday. The course was easy to navigate, marshalled and with adequate support.  Definitely worth doing.
Posted by Eddie Gaul at 2:25 PM