One of the premiere events to do during the Halloween season is Runtastic's Haunted Half races. It is a heavily attended races set in Salt Lake County and Utah County that offers a 5K and half marathon distance.  They usually get over a 1500 runners for their races, so the competition can be fierce for one of their coveted award medals.
For the past 2 years I've signed up for the Salt Lake edition.  Each year the course has been different. The first year was around the neighborhood's of the downtown zoo -- which were very hilly.  The next year was around a park in the downtown area.  This year, was a super fast course that involved bus transportation 3 miles up a canyon and you ran until you hit the zoo area. This course promised fast times and it certainly delivered! 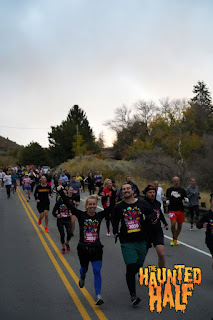 As stated above, the race was set to start at 8:00 AM about 3 miles up Emigration Canyon.  When the settlers first arrived in Utah some 150 years ago, they took this route into the Salt Lake Valley.
Now it is a well traveled scenic route that is lined with hills, hiking trails and expensive houses nestled on the sides of the canyon.
When I arrived at the race site, the bus loading was packed and lined up well over several hundred people deep.  They had instructed us to arrive by 6:55 and at 6:45 they already had a problem.
It wasn't until 7:15 that I was on a bus and about 10 minutes later dropped 3 miles up the canyon.  On the way there, I had taken stock of the course -- it was going to be a fast one.  And I was suddenly questioning my decision on wearing very thin racing shoes.
The weather had been threatening rain but it was supposed to arrive later in the day.  We did get some sprinkles, but all things considered the 30 minute wasn't too inhospitable.
Surprisingly the race started on time despite the bus fiasco. 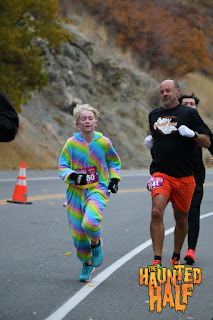 I had lined up close to the start and in the final minutes I was debating how hard I wanted to run this.  Certainly the course was going to be fast but could I count it as a personal record given that it had over 450 feet of elevation drop?  I decided to give it a max effort -- it was a race after all and if it did turn out to be a person record for me, I could always highlight it with an asterisk.
From the get go there was a pretty strong wind coming up the canyon.  At times, it seemed like gale force winds and other times it buffeted you from the sides.  The wind was coming from the south but it had found its way into the canyon.
I rocketed off to a 7:31 first mile.  I had presumed the course was primarily downhill, but there were a few rollers in there to make it a somewhat honest course.  At times, I drafted off of larger runners.
I knew I had gone out too fast but I also knew I could coast most of the race.  That even if my pace dropped off, I'd be assisted by gravity.
I was thoroughly enjoying the race though.  The downhill wasn't as quad smashing as I thought it was going to be.
The race was packed but I was never hindered except maybe at the very start.  I found myself with some pretty strong spurts of energy as I cruised down the hill.  I was feeling super strong and hit the mile 2 with another 7:35 mile.
I actually was a bit surprised that this mile wasn't faster but I also knew I had hit some headwind.  I couldn't imagine this course with a trail wind though.
Mile 3 got a bit more realistic and my pace dropped a bit.  Most of the massive downhills had ended and the wind definitely seemed to pick up.  There were a few less people to draft behind and clearly I was hurting.  I was on target for a great race, but I had to hold it just a little longer.
Finally the finish line's Halloween set up came into view.  I could hear music playing and could hear the echo of the announcer.  As I exited the canyon I tried to get an idea of where and how this course was going to end and when to start my final sprint. 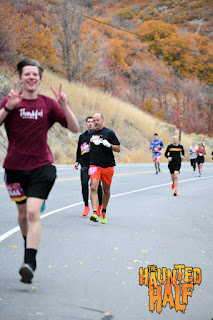 There didn't appear to be anyone in my age group but that didn't mean that someone had started well behind me and was going to beat me.
My only complaint about the course was the final home stretch.  After exiting the canyon, the finish line pretty much immediately appeared and we had to hang a quick left into the park. I glanced at my watch and I figured there was no way the remaining distance would be 3.10 miles. The course -- after all the mile markers were spot on -- was going to be well short.
Fortunately I was wrong.  However, I did have to run through a darkened tunnel with streamers hanging from the ceiling.  It was part of the Halloween thing and it definitely slowed me and everyone else down.  I simply for the life of me couldn't plow through it.
After exiting the tunnel I had another 100 yards or so before making a sharp turn and finishing under the Runtastic arches.  This was all done on grass and it was flat -- so the finish -- while usually my fastest -- was my slowest segment of the race.  So much for a finishing kick.  Best of all though the course was spot on 3.10 miles.  So it was a legitimate race distance. 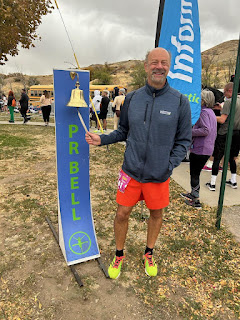 So I ran really well on this one.  According to my Garmin, I had about 450 feet of drop and only about 50 feet of uphill.  I suspect there was a bit more uphill and the headwind definitely slowed me up.
I am not sure whether to count this race as personal record worthy but I ran well all things considered.
Post race refreshments were donuts, juice, Powerade, and water.  They also had candy and fruit.  It was a well stocked finish line.
Sadly, I placed 6th in my age group.  I knew one other 50 - 54 year old who I knew would beat me, but I didn't expect this race to be so competitive. 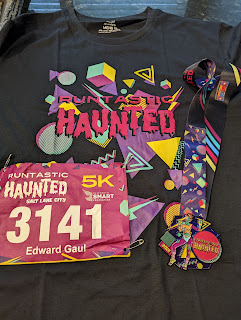 The race shirt was nicely designed but it isn't 100% polyester (60 / 40).  The medal was weird -- didn't seem very Halloween themed but I am not much of a medal freak.  It's always nice to get one but they usually wind up in a box by the end of the week.
I paid $20 for the race a year in advance during one of their sales.  It was well worth the price of admission. 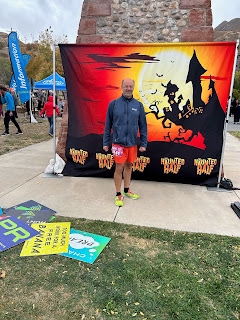