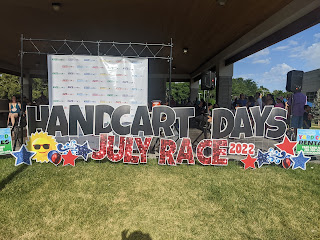 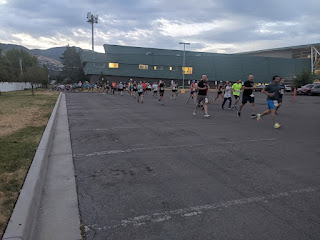 One of my summer traditions over the past few years has been the Handcart Races held on Pioneer Days Weekend here in the state of Utah.  We don't actually race with handcarts, but the local recreation center up in Bountiful, hold a 5K and half marathon race.
When I first moved here in 2012, I ran the half marathon.  Periodically I'd show up for the half marathon, but over time I've shied away from the half marathon.  Mostly because it is just too hot and it usually winds up being a "sufferfest."
This year was no different.  I marked it on my calendar and opted in for the 5K.  If you sign up early enough it is a nice bargain: offering a nicely run 5K race with a medal, t-shirt and even a breakfast at the end.  I really do like this race series. 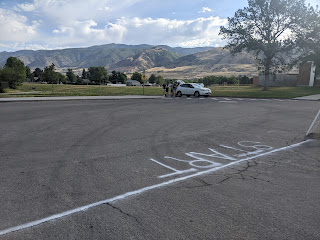 I got to the race at about 6 AM.  The race starts at 7 AM so I was just in time to see the half marathon running head on out.  It was already 70 degrees and I was thankful I wasn't running the longer race.
One of the nice things about this race is that you do have the comfort of a recreation center to stay warm and have clean bathrooms.  The packet pickup was held in the gym and I was able to quickly get my bib, shirt and some giveaways.
I cycled through the bathroom and then did a quick 1.5 mile shake out.  I noticed right away it was warm and even though I'd describe my warm-up as "less than strenuous" I had worked up a nice sweat.
I assembled with a few other hundred runners at the start line just shy of 7 AM and waited for the start.
However, I think there were some timing issues and it took about 10 - 15 minutes before the race started.  And those first 50 yards I actually felt really stiff.  It was a jolt to my system.  Also, a lot of people were lined up fairly close to the start that probably shouldn't have, so it was fairly congested for a while.
The race is basically a large square starting and ending at the recreation center.  It is a residential run for the most part.
The first mile is a slight downhill and leads you to believe you are going to have a fantastic race.  After my initial slowdown, I finally got some room to run.  I was working with another guy (who was ahead of me) in order to pace myself.
In the past, I've been able to beat him in races but since I was injured / ill, he's been able to finish ahead of me.  Could I keep up and possibly retake my "crown?"
I was keeping up with him and he was within reach as I clicked off a 7:40 first mile.  A fantastic first mile, but I knew I'd have tough times ahead.  After about 1.35 miles, you have to ascend back up to the recreation center.
I was gaining some ground on my target and once we hit the first corner (at about mile 1.25) I just simply ran out of gas.  I felt my pace drop and it seemed incredibly warm.  My target gained ground and I told myself to just hang in there, maybe I could gain ground.
But this race is very hard to negative split.  After the smashing first mile, most of the rest of the race is a grind uphill.
By the time I hit the return stretch I was wishing the race was over.  My next mile was an 8:20.  My watch kept flashing upper 8's.  I really became upset with myself.
My competitor sped ahead of me as I lost ground, and hope of a decent race.
The final mile is always the worst.  The hill gets progressively harder and finally when it lets up, you have less than a quarter mile to make up the time to the finish line.
Once I did get to the top, I managed to find a bit of an extra gear, but at this point there was no one behind me and no one I was likely to catch.  But I did look at my watch and realize I had a shot at sub 25 (somehow). 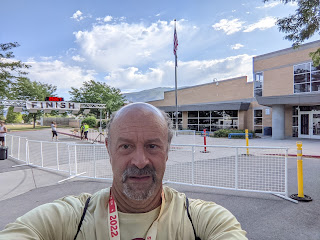 Well, I never did catch up with my competitor and I didn't crush a 25 minute 5K like I had hoped.  It was warm and I just couldn't get anything going today.
There were parts of the race where I just wanted to start walking.
All things considered though my time was in line with what I've been running recently.  In fact, my time wasn't too far off from the 2020 edition. 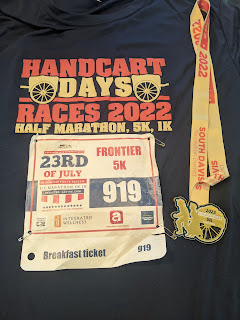 I went back to my car and reclaimed my gear and went back for the free breakfast.  I knew the results were online but to be honest, I just didn't care that much.  If I placed so be it, if I didn't, I was okay with that too.
Breakfast was muffins, eggs, hash browns, pancakes, chocolate milk / Sunny D, and orange slices.  It wasn't my favorite post race breakfast but it was good enough. 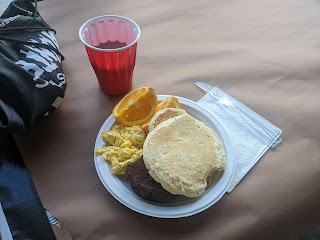 I finally did check the results and was shocked to learn I had taken first in my age division.  Unfortunately there weren't any awards due to supply chain issues.  They are planning on mailing them out.
Overall, this race didn't sit that well for me.  I was really hoping for a better time but I have to remember this is a bit of process of getting back my fitness.  I am dealing with injury, post-illness issues and the related weight gain form not being able to run as much.  Definitely an uphill battle.
I also think I gave up on myself.  While my pace was slowing, it wasn't as bad as I thought it was.  And ultimately that affected my overall time.
Either way, I am glad I went and I managed to snag a nice shirt and finisher's medal to add to my collection.