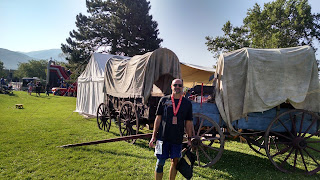 In Utah, we have a July tradition called Pioneer Day -- it basically commemorates when the first settlers came into the Salt Lake Valley some 175 years ago.  On that day, state offices are closed and generally there are parades, rodeos and such.  Most regular folks work, but for much of the state, they are off.

To celebrate the historical event, the South Davis Recreation Center holds the Handcart Half Marathon.  The handcart is what settlers used to transport their worldly belongings across the country, hence the name.

The South Davis folks always do a good job -- especially for the price.  Their races are always a bargain and are well supported, chip timed, and I always feel like I get way more for my money.  So anytime I am able to, I do their races. 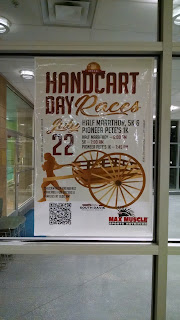 Being that this race is held in July, when daytime temperatures usually eclipse 95F this race mercifully starts at 6 AM.  This means that I had to wake up super early, eat a bit of food and then make the 20-some-odd-minute drive to Bountiful.

I rolled in around 5 AM (runners are punctual folks) and was one of the first ones there.  It was an easy packet pick up and I grabbed my shirt and whatever giveaways they had: 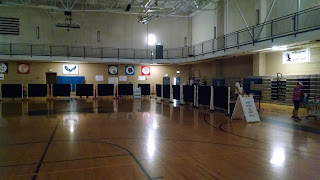 The race lets you use the recreation center, so I had clean, flush toilets and a place to relax and kill the roughly 45 minutes to the start.  Time went by quickly and I wound up connecting with a friend or two I haven't seen in a while.


For once, their race started on time.  Normally their races start 5 - 10 minutes late.  As far as I could tell, this one started at 6 AM and we were off.

The first mile or so is a gradual downhill.  I made a mental note not to go out too quickly.  I had very distinct memories of my last few half marathons being sufferfests because of the heat.  At times the pace felt ridiculously easy and other times I felt like my legs had 5 pound weights on them.

I wound up settling behind the 2:00 hour pacer.  I figured I'd run with him until the half way point and then make a decision as to whether I felt like I could push the pace any faster.

As I crossed the railroad tracks, I remembered last year that a whole slew of runners got stuck waiting for a train.  They had volunteers at the intersection with a chart in case the train came again, but it didn't.

Around mile 2.25 or so, you jump on the Legacy Bike Trail system and head north.  I've run a TON of races on this trail and to be honest, I am pretty bored of it now.  I knew around mile 7 or so we'd be off the trail and onto more interesting parts but I just told myself that at least it was flat.

I continued to hang on with the 2 hour pacer.  I would be happy with a 2-hour finish given the weather.  Around mile 7 I was starting to feel it.  The easy pace that the pacer was running at suddenly felt a lot harder.  I also knew that once I exited the bike trail that I had the overpass to climb as well as a yucky hill.

The pacer was suddenly a distant speck on the horizon as my pace took a huge hit.  I definitely wasn't going to finish in 2 hours.  I had been drinking at each water stop plus sipping at my own Tailwind but I felt so incredibly warm.  I haven't been running much on account of some runner's knee so I was woefully undertrained for this race.

The final 5 miles is a series of rolling hills culminating with a gradual climb to the finish line.  To my right you have some nice houses lining the main drag back into Bountiful and on the other side you have the Bountiful mountains blocking the sun.  I really like this section of the course despite some passing traffic.

However, sooner or later the sun was going to come up and by the time it did, I was hurting / doing the marathon shuffle.  Having run the course many times and the final 1.5 miles follows the same route as their Thanksgiving Day races, I knew exactly where I was and how much longer I had to run.

Every now and then I'd get passed but I sensed a lot of people were in a similar state: warm.

I was so happy to finish the line, grab my medal and just stop running. 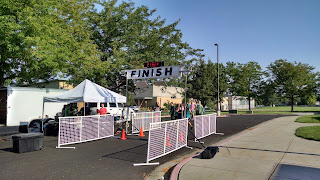 I wound up socializing a while, waiting for the wooziness to stop.  I grabbed some water and walked it off.  I also met some new runners as well and shared race stories with them.

I really like the medal.  It is huge and heavy duty.  These folks always go all out with their medals. 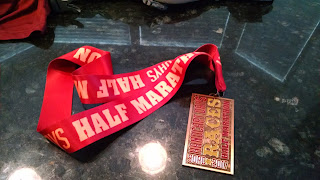 For $35 (I think that is what I paid, maybe $30) this race is a total bargain!  I got a fully supported race with at least 6 water stops (there were probably more), a cool shirt, swag, and a pancake breakfast.  So cool!

My one complaint about the race is that the mile markers were a mess.  They were completely off, oftentimes by a lot.  I do wear a Garmin and having run the course before I knew it was pretty accurate.  But for those without that tool, their paces would've been totally off. 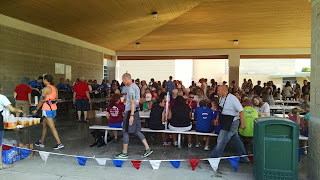 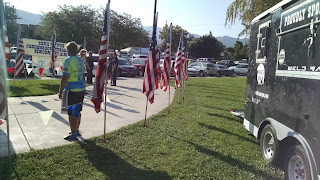 However, it wasn't my day to race.  Looking at last year, I had a pretty decent race.  This year, not so much.  Once again, I haven't been training much and with my bum knee, I was half wondering if I would be turning around after a few miles (I did wear a knee wrap)

I did however finish and the first 7 miles or so, I was roughly on target with what I wanted to do.  I wasn't expecting much on this race in terms of my performance, so I pretty much got what I expected.  Definitely a character builder on this one and I know I can do better in the future. 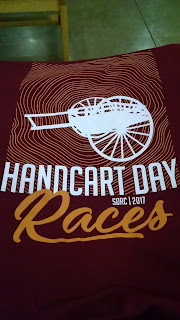