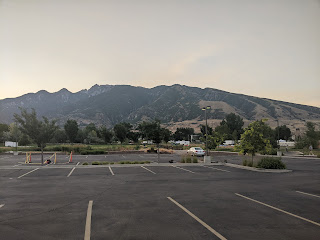 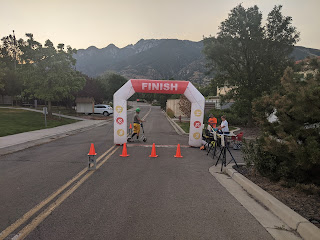 It's been a while since I've participated in the Draper Days 5K.  It was 7 years ago I toed the line for this very competitive 5K.  I ran pretty well (24:12 or so) but found myself buried by the competition.
In the years since, the course has changed a bit but the event remains the same.  With not a lot on the docket and looking for a 5K, I opted in for this year's event.  It was cheap, fairly close by and I knew I could count on a good event. 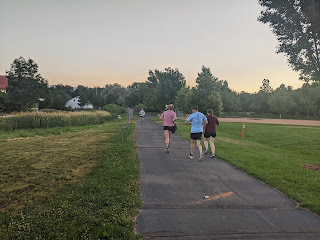 I had had a friend pick up my bib before the race, so I didn't have to wait in line for anything.  It was very convenient and I just found some parking, used the bathrooms and started to get in a warm-up.  I actually felt pretty good as I did some drills and ran for about a mile.
The race started promptly at 7 AM at the Draper City Library.  Definitely different from the previous edition.
I felt pretty good and my goal was to ease into the race and try to run as consistently as possible.  I am still coming back from an injury / illness so I knew my speed was questionable and my endurance is not what it used to be.
So I went out strong but not all out on the first mile.  As we made our way out of the Draper City Park, I didn't even look at my watch. I felt comfortable, was moving pretty well and I was watching for my competition.  A guy who looked to be about my age was in front of me and got off to a good start and was leaving me in the dust.  I had chatted  up with another guy before the start of the race, figuring he was in my age group too.  Up ahead, were bunches of high school kids and young adults.  I had a shot at an age group win!
The first mile is deceptively uphill.  It doesn't look like much but it is a slow grind about half way through it.  I had expected this as I had studied the course profile a bit and I remembered running the same course 7 years ago.
As we made our way down residential street my watch flashed that I had run a mile in 7:58.  Despite the hill that was a really good time for me and I was still feeling strong. 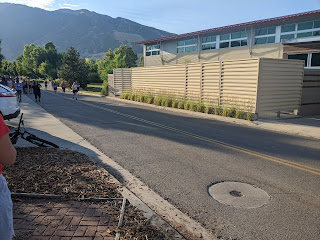 Shortly after we hung a right and headed west.  This mile was downhill a bit and I bumped my pace up.  I was closing the gap on one of the guys in my age group  and the other was well ahead of me.  I dug into my competitive roots and held on.  I was hurting -- as I should at this point of the race -- but could I hang on?
Near the end of mile 2 I figured this mile was going to be slower than the first -- probably an 8:15.  But again, I surprised myself -- 7:47.  Wow -- could I reclaim my fitness and go sub 25 minutes?  Would this be a significant hurdle I've managed to jump over?
I keep willing myself forward as we ducked onto the local bike trail.  I vaguely remember in 2015 suffering / hurting on this section of the course.  Also, with the sun rising I was blinded.
One of the runners who appeared to be in my age group suddenly stopped running and began to walk / run/  I am not sure what happened but he had been running so well and clearly had me beat.  The other guy also suddenly stopped and started walking.  You could tell he didn't have the endurance.
My pace had dropped quite a bit and I kept looking over my shoulder to see where the competition was.  I was running pretty much solo.
I finally got a sense of how much longer I had to run.  With a new course, I am never quite sure how much longer I needed to go.  With 2.75 miles to go, do I have .35 miles or .45?  I turned up the jets just to cover as much ground as possible.
I was sad to see an 8:30 pop up on my watch with the finish line hiding behind a corner.
I had a pretty good idea that I had less than a minute of running to go, so I dug deep and pushed to the finish line. 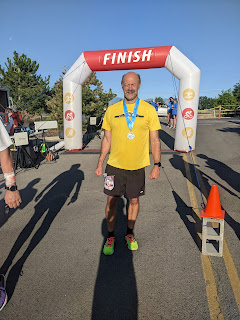 So while my time of 25:16 isn't that much of an improvement over last week's race, I felt like this race was a big moral victory.  This course was less challenging than last week's: flatter and cooler weather without much wind but it was a bit longer -- and I ran it faster.  I just felt a lot stronger and I've been doing some physical therapy to address some of my weaknesses, so I felt like my core was a bit stronger. 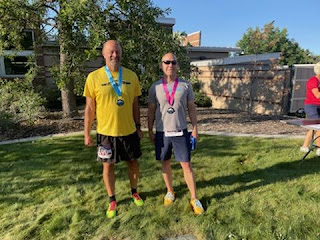 I was pleasantly surprised to see I had won my age group.  One of the guys I was racing against definitely was in my age group, the other was not. 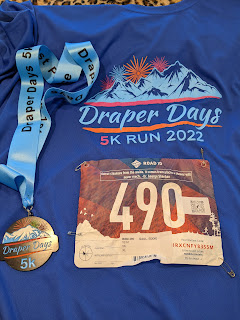 There were no finishing medals on this race (hence the $20 price tag) but I came home with a medal and I love the t-shirt design.  It is also polyester and one that I'll wear.
Post race refreshments were simply water and bananas.  Again, a low frills race and all that I really ask for given the price.