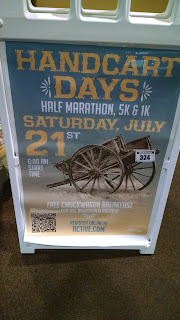 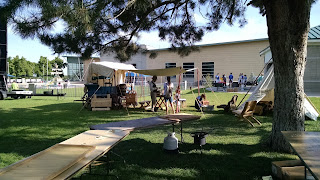 Now that I am back in Utah, I have been focusing on getting out there and doing some races here.  Today's race took me to a familiar haunt: The South Davis Recreation Center.

The recreation center puts on a fantastic series of races throughout the year.  They are usually well-attended, cheap, and I feel you get your money's worth.

In year's past, I have run the half marathon.  However, my distance training hasn't been what it should be and I know from past experience if I haven't been doing my long runs a half marathon just isn't going to be a good experience.

Hence this year I signed up for the 5K.  The 5K course is identical to their Valentine's Day and Thanksgiving Day run so I knew what I was in for.

The race commemorates the Utah settlers who entered the valley some 150+ years ago.  So the whole race and atmosphere is pioneer themed.  Apparently the settlers dragged their worldly belongings on a handcart, hence the race's name.  There are exhibits and a small carnival and historical exhibit in the park near the finish line. 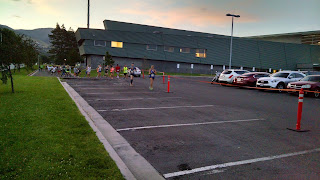 The 5K started at 7 AM and I rolled in just a hair before 6 AM.  Fortunately, I was able to watch the half marathoners start and nabbed a few photos of the pack as they ran by.

I grabbed my shirt and bib in no time flat and managed to kill an hour before the race start.  The race started right at 7 AM.

I was half asleep it seemed when the race started.  I had warmed up a bit with some drills but nothing serious.  It wasn't "Arizona hot" but it was warm.  I just felt tired, but I knew once the race started I could bust out 3 miles.

Initially I was hemmed in but by the time I turned the corner onto the main drag, I could run at my own pace.  I was working pretty hard but I knew I wanted to take advantage of the first mile since it was mostly downhill along a residential street lined with houses / apartments (and later in the race, small businesses)

I turned in a 7:50 first mile, which was exactly where I hoped to be.

After the first mile, the race makes another turn and there is a slight climb to the half way point.  This hill always seems bigger in my mind and I think it got the best of me and I slowed ever so slightly.

I tried to find people to work off of and I thought I spied another guy who might be in my age division.  I made it my goal to hang with him.

I was crestfallen when I hit 2 miles and saw an 8:23 mile.  Way too slow.  I figured I had some more in the tank and tried to pick up the pace.  The final mile from 2 to 3, however, is a bit of a climb.  While 70 feet doesn't sound like much, it is an extended hill that just wears you down.

The guy who I chose as my target maintained a better pace than me and was extending his lead (I never caught him) and I found myself battling it out with a loud-stepping teen and a father / son combo.

I figured I was going to turn in a fast mile but again, the hill got the best of me.  I expected another 8:23 but after reviewing my Garmin, I realized I hit an 8:39.  Eww. 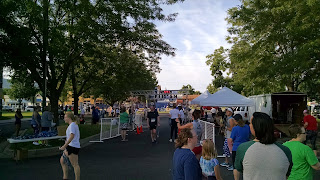 I didn't have anyone tailing me but I dug deep and crossed the finish line around 25:24, which is where I pretty much expected to finish. 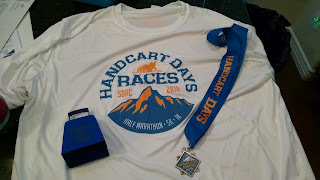 After the race, I grabbed some Gatorade, bananas (Organic!) and checked my results at the computer.  3rd Place in my age division -- sweet!  Honestly, I expected to finish in the top 3 -- it was a small-ish race and most of the faster runners I suspected were doing the half. 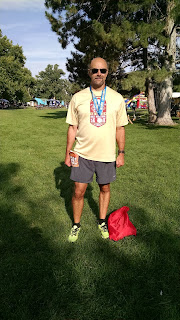 The 5K finisher medal was pretty tiny.  I think they had a bigger one for the half marathoners -- as they should.  Their Thanksgiving / Valentine's Day medals are usually works of art.

I got a free pancake breakfast, which was actually pretty good.  The shirt was nicely designed but the white shirts tend to show stains after a while.  My age group prize was a stylized cowbell, which was kind of cool.

As usual, I got a good deal for my money.  I got a swag bag, shirt, medal, supported course, post-race refreshments for less than $30.  I definitely enjoy the race series and would definitely be back -- hopefully for the half next year.