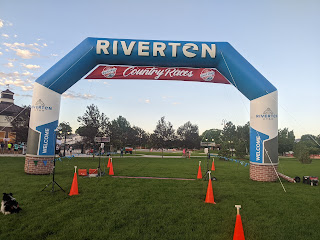 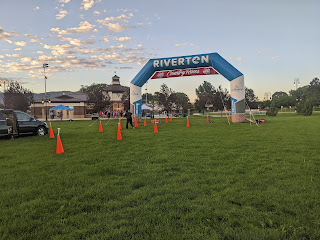 Several months ago, I signed up for the Riverton Country Races 10K race.  Riverton hosts a number of races each year and this is their summer race, which is tied to their city's celebration.  They are primary noted for their March half marathon (and 5K).
I discovered this race a year ago and it is a bargain -- but super competitive and only the first in each age group wins something.  I managed to nab a great bargain of about $10 to register for the 10K race. 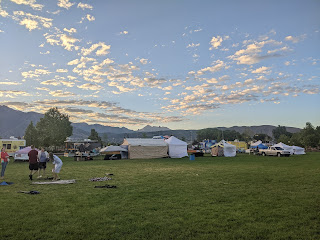 I showed up to the race well in advance and managed to snag my bib pretty quickly.  I also got there early to switch race distances.  I had signed up for the 10K but I knew I wasn't really capable of racing a 10K.  After being injured / sick the last few months, my endurance and volume of running is at an all time low.  So I made the wise decision of doing the 5K.
The 10K started off at 7 AM and the 5K started at 7:15.  I managed to use the (plentiful) bathrooms before the race and get in a solid warm-up.  I was a little apprehensive standing at the starting line -- it was a big crowd, breezy and I had already worked up a decent sweat.  Summer racing in July is usually challenging.
The race was off and I certainly remember the race starting off in a different pattern than last year's addition.  Seemed a little weird to go charging over the lawn, jumping into the parking lot and then heading out into the street -- but it was follow the leader.
My goal on the first mile was to go out solid but not all out.  There was a stiff headwind and I wanted to run behind someone who was a little bigger than me and running at the same pace.  I was semi-successful at this.
The first mile was also a gentle incline.  Nothing too crazy but it definitely took some extra effect.  It was warm and the hilly part was coming up.  The race was along a residential street lined with some older homes.  I recognized the route as it is the home stretch of the March half marathon and part of the 5K course as well.
I hit the first mile at 8:09.  Not too bad but I felt like I had already used a ton of energy just to run that.  We hung a left onto another street and sprinted down a long hill. I had the painful realization that I was going to have to run back up that hill (being that the course was an out-and-back).
After another short distance, we hung a right and headed down Lover's Lane.  Lover's Lane is a rolling hills road lined with well-to-do houses and a pretty nice view of the Wasatch Range to your left. Normally I'd love running along here but I was suffering.
I finally hit the turn around and glanced at my watch. Exactly 1.55 miles.  This was going to be a legitimate 5K race.  I always love it when race organizers get the distance correct.
Also the turn around was a welcome sign of relief.  I now had a bit of a tailwind as I sped northward along Lover's Lane.
Finally Mile 2 dinged on my Garmin:   8:31.  Disappointing but not unexpected.  The hills and heat and wind were taking it out of me.  I just hoped I could rebound a bit but I also knew I had a solid quarter mile of "uphill" before I'd finish.
I made it up the hill and finally made the right turn to make the final .75 of a mile back to the finish line.  With a gentle decline, the wind at my back, I still had hopes of at least a little redemption.  There were times along here that I was running well, but I was spent.
I pushed the final .10 and was hoping to crack 26 miles but I didn't quite make it -- turning in a disappointing 26:09. 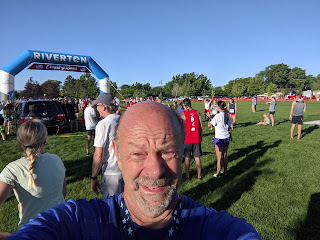 So this was definitely NOT the race I wanted.  After a nice run last weekend, this one was a flop.
A couple of reasons for this:

1) It was warm
2) I had a really lousy week of training due to my injury
3) This course was significantly harder than last week's.
The smart thing I did do was drop to the 10K and make the most of it. 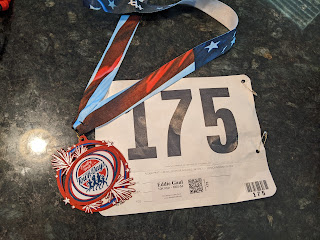 This race cost $10 -- I signed up very early for it and it was a bargain.  The race was well organized.  No r-shirt for this one, which was fine but I did get a finisher's medal and post race refreshments.  The finisher's medal (I think) appears to be recycled from last year.
I did have a good time and I was happy to get some "hard" miles in.  I am still acclimating to the heat, so there's been a lot of adjustment.  Also, my training has been more miss than hit.