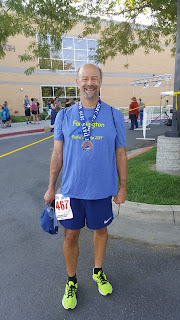 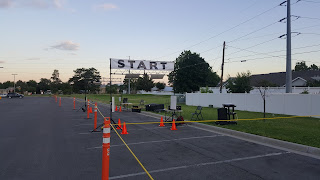 
6 - 8 weeks ago I decided in my infinite wisdom to sign up for a half marathon -- in the middle of summer.  At the time that I signed up the summer wasn't that bad.  The highs for the day were around 82 and for a Utah summer, it was very mild.

Unfortunately it didn't stay that way and summer became just that, summer.  So with about a week to go before the race and with temperatures hitting the mid 90's on a daily basis, I opted to switch to the 5 -- despite a mildly bruised ego.

The race director happily switched me over at no additional headache or cost.  I was pretty happy with my decision when I saw race weather showing around the low 70's for the start.  I haven't been getting in as many miles as I should for a half and I don't think I am quite heat acclimated just yet. 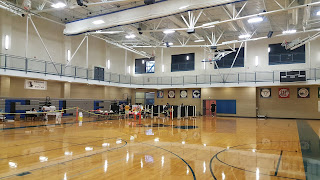 I rolled into the South Davis Recreation Center just as the half marathon was starting off (6 AM).  They had in the low 100 runners and I watched them head on out with just a tiny bit of regret.  I grabbed my bib in short order and began a warm-up.

Unfortunately they were out of my shirts, so apparently they are going to mail me one.  Bummer.  It looked like a good one this year too.

My warm-ups went well and I felt like I had a shot at a decent race.  It was warm and I was on a light mileage week so my legs weren't too beat up feeling.  I was ready to run fast -- I had my fast 5K shoes on and despite the warmth it was a fairly decent day for a 5K.

It was during the warm-up that I realized I had forgotten my Garmin.  Argh.  I hate that because it screws up everything.  I had some thoughts about using my phone to track my run, but my phone these days is a fairly large one and the last thing I wanted to do was lug around a heavy phone. 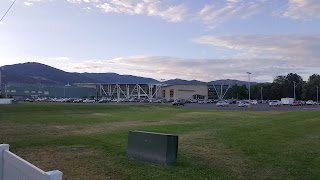 The race started promptly at 7 AM and we were off.  I was hemmed in at the start but within a few hundreds yards I was off.  People were jockeying for position and soon enough I had settled into a pace... not sure what it was but I felt like it was aggressively.

I remember the first 1.5 miles or so as we ran down one of the main drags in Bountiful was mostly working with a young boy who ran about 100 - 200 yards hard and then would stop and tie his shoe or walk for a bit.  I'd thought I have left him in the dust when he came flying by me again.  It was until about half way through the race that I finally got some peace....

I was hurting at this point and I sensed that this wasn't going to be my race.  My legs just felt a little heavier and I felt like I wasn't getting enough air.  At about the 1.25 mile mark you also start a steady ascent back to the start.  I've written about it before -- it isn't a crazy uphill but just a death by a 1000 cuts.

By the time I got to the aid station (at about mile 1.60 or so as memory serves) I knew the final stretch was going to hurt.  As I made my way south on Main Street I counted back the numbers of times I've run this stretch and how almost always I've suffered through it.  I am so close to the finish line yet so far away.

It was demoralizing being passed by the speedy half marathoners.  They had had an hour head start and the ones finishing in the sub 1:30 range fly by me.  Here I was racing my guts out at mile 2 or so and they were on mile 12 and they darted past me like nothing.

I dug deep and I just keep pressing.  I felt like I was going to puke and fortunately no one was behind me for quite some time.

Finally I reached the summit of the hill and knowing there was less than a quarter of a mile left, I pushed with whatever I had left.  Thinking back I don't remember much about this segment of the race other than it felt so hard and painful.

The finish line finally came and as I crossed I couldn't tell if I had finished in 25:13 or slower... but I wasn't too surprised with my time. 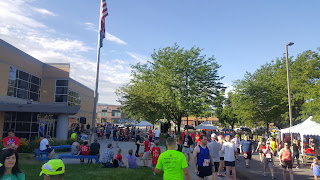 I walked off the light headed feeling and was kind of dejected as I thought about my time.  25 and change.  Ugh, not the race I wanted.

I grabbed my finisher's medal and went over and got some Gatorade.  I reviewed the race with a few people but I only knew a handful of people there. 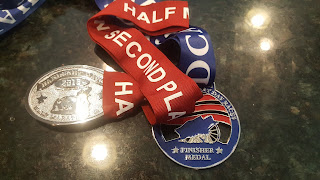 In the past it's taken them a while to do results and today it was no different.  Sadly it took nearly 2 hours to get the awards handed out.  On the plus side, though, there was a pancake breakfast and plenty of food.

It also took a while to simply find my time and placement.  But I was in no rush and had plenty of time. 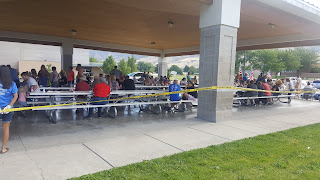 I was excited to see that I finished 2nd in my age group.  They had some pretty slick awards and all said and told, I definitely got my money's worth.  I paid $30 and got a premium medal, shirt, refreshments, and breakfast.  Quite a deal.

I reviewed my time from last year and yes, I was slower.  But I appeared to have struggled last year too.  So given the time of year, this is probably not an ideal time to race for me.

This race was a painful reminder that 5Ks are tough.  Yes, the distance is not very intimidating, it is the pace of the race.  From the outset, it is rough going and really a test of fortitude (at least for me) and mental strength to keep pushing the pace even though you start feeling hazy, pukey and jelly-legged. 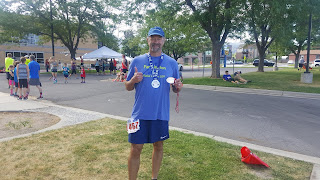 This course is definitely a test one too, since I've run it at least a dozen times, so it is a good fitness indicator.  It also means that I need to work on my speed endurance in the near future to reverse my time's directions.