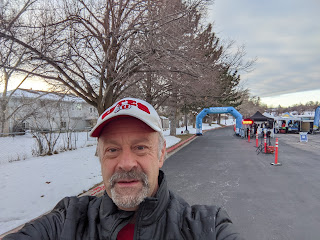 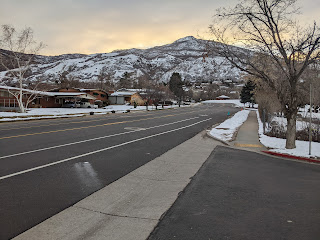 It's been a while since I've been to Ogden to run one of their race series.  Half a decade ago, I was a regular at their races.  The past couple of years though, I've had race conflicts, Covid-delays, or just too many races and not enough recovery to make the drive up there and participate.
This past weekend, I didn't have a race on my calendar.  I had some options -- drive down to Southern Utah and participate down there or sit it out.  I wanted to race but didn't want to spend the money and make the drive to Southern Utah -- having just been down there 2 weeks ago.
I had resigned myself to not racing and getting in a training run, which I was fine with.  However, I started hitting up some of my friends for ideas and discovered that the Winter Striders had their 10K.  I figured why not -- an easy drive, get the race done and maybe grab some food up there.  Sounded like a fun morning.  So I fired up the old web browser and signed myself up. 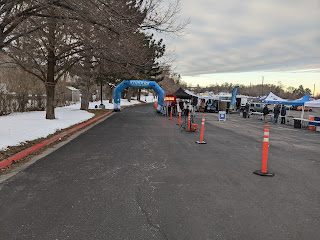 So the race is part of the Ogden Marathon series.  They have a 5K, 10K, half marathon and 30K designed to train you for the Ogden Marathon.  They also have a short course for those doing the half marathon.  In the past, they were well attended and extremely competitive.
I hadn't been there for a race of theirs (other than the Ogden Marathon) in quite some time.  The 10K course had changed and I noticed a bit less people.  Also there were no age group awards for this race (only for the entire series).  The course, in my opinion, was a lot harder then the predecessor, but still enjoyable and scenic.
I got there at 7 AM for the 8 AM start, grabbed my bib, used the potties a few times and did a quick mile shake out run. It was chilly but not awful -- with no wind.  I wound up wearing shorts, thin gloves and a long-sleeved tech shirt.  I also tossed on my skullcap running hat.  I was pretty happy with my running choices. 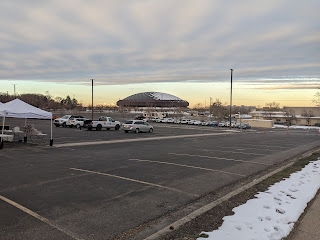 The race started on time and I was off running.  I had studied the new course a bit and I definitely remembered the 10 mile race which I had run a few years ago.  This course shared some of the same streets -- so I knew I was going to be in for a challenging race.
Sure enough, the first mile included a lot of rolling hills.  I felt comfortable as I started the race and told myself to be patient.  I had some idea of how the course was laid out, but I had a few surprises coming at me.  I was very happy with an 8:10 first mile. But how much slower was I was going to go?
Mile 2 and 3 hurt -- badly. I knew I wasn't even going to come close to last week's blistering 10K time of 50:34.  The hills were relentless.  Occasionally, I was treated to a downhill section, but primarily we were climbing.  None of the hills were back breakers but they were definitely hills.  I was gassed and sort of saddened to see 9:21 miles pop up.  I was running faster than that for my half marathon!
Finally we got to the highest point of the race and I galloped down Skyline Drive.  A steep downhill section.  I was flying.  Another guy next to me thanked me for pacing him and I said hang on tight, we gotta go up this thing on the way back.  I don't think he believed me.
The views were beautiful and I nailed a 7:36 pace.  Wow!  The problem was that I had some extreme muscle soreness in my left lower lumbar.  It lit up the side of my hip and lower back.  It hurt.  I cursed to myself more than once.  I wanted to take advantage of the downhill more fully, but every downhill section it let me know it was upset with me.
After making it to the bottom of the hill, we had to do a flat section.  My legs were pretty gassed and the issue with my back turned to a dull roar.  It actually wasn't bad when I was running uphill or the flats.  And I was still holding a decent pace for the flat sections.  My endurance was still good.
However, the final 2 miles were all up the hill I had hit a 7:30 on, on the way down.  The first section around mile 4.25 was the worst and it seemed like everyone was walking or huffing and puffing hunched over.  I just worked on my turnover, kept a good form and worked my way up the hill. 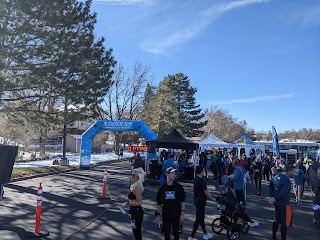 The course was a loop and it was great to receive some cheers from those making their way down the hill.
At this point, I knew the way back to the finish line and I knew what lay ahead.  The hill -- that lasted well over a mile -- got a bit easier the further I ascended.  I could almost smell the finish line from about half a mile away and my turnover quickened.  I still had plenty left despite some fatigue in my legs.
Upon cresting the hill, I had a section of mostly flat / downhill.  Collectively, the runners around me sped up and our 9:45 pace suddenly dipped back into "real" 10K pace.
There were no age group awards and I hadn't participated in the 5K race for this, so I wasn't eligible for any awards.  But still, my ego was on the line.  I pressed onwards and smashed the last quarter mile.  I flew under the finish line -- not feeling totally dead, but relieved I had gotten through this race. 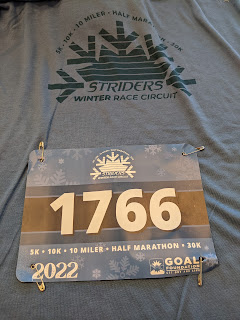 So I ran a 54:30 -- a full 4 minutes slower than last week's flat race.  Granted, this race -- according to my Garmin had 700+ feet of elevation climb.  And the elevation was a bit higher.  Definitely not conducive for a personal record race.
None the less, harder races build character and everyone else had to run the same course as I did.  I sort of checked around what other people usually ran a 10K in and my time was in line with what others who finished near me were capable of.
The race set me back $33.  I got a t-shirt, a timed race with results, course support, and coffee / Hostess products at the end.  It was also a fun time with great weather.  I had registered the week of the race, so I wasn't expecting any bargains.  Overall, I was happy with my experience.
After the race I socialized and checked in with a variety of people and just enjoyed the crisp morning air. I didn't know anyone there -- I don't usually race much in Ogden, but runners tend to be a social bunch, so it was easy to chat other people up.
I am at a loss to say whether I ran well compared to other times I've done this race.  The 3 other times are easily comparable.  But this route only shared maybe 40% of the original 10K.  In looking at previous races, it would seem that there was less elevation climb than this one.  Still, it's hard to compare definitively.
I am just happy to finish strong and get in a tough run in.  The hills build character!  Now, I just need to fix my back! 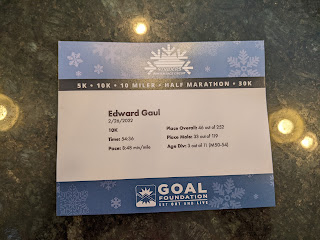