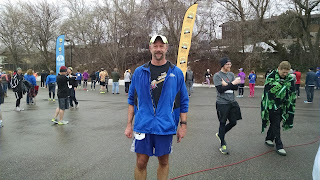 Since I've signed up for the entire race series this winter, I made the journey for the second installment of 5 races up in Ogden.  Faithful readers may recall that I ran the 10K last year and was pretty humbled by the hills -- that I didn't know existed.

This year, I knew what to expect and came prepared for the race.  My only goal, though for this race was to do better than I had last year.


On the way up to the race it started to rain.  Normally I run great in the rain and this was sort of a blessing.  Although the rain was fairly short lived but the air was cool and just a perfect day for pushing the pace. 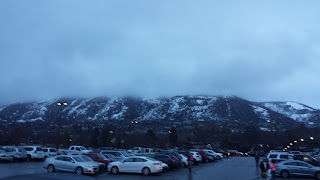 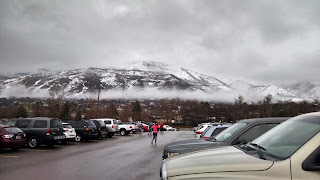 I did a brief warm-up after picking up my timing chip and bib.  Since I had paid for the series up front, I had already gotten the t-shirt from the previous 5K race.

The race started promptly at 8AM and the first half mile or so I was hemmed in pretty well.  Normally I am a fast started and in some ways this was a blessing and in other ways I was a little frustrated.  I think I had started a little too much in the middle of the back and I had to claw my way to the people in my pace group.

I was really upset with myself when I hit mile 1 and saw that I was about 30 seconds slower than last year.  Ugh.

The next few miles are primarily downhill, including a knee breaker that you have to climb up on the way back.  I certainly wouldn't want to run down this hill on a daily basis.  Also, the road is cambered so unless you are running in the middle of the street, you will have one leg lower than the other -- which is a recipe for IT-band syndrome.

My legs were pretty tired feeling and with growing desperation I realized that my splits were a bit slower than last year's.  The only goal I had for this race was to do better than last year.

By the start of mile 4 the hills start to set in and it becomes a battle to maintain your pace.  Also, a lot of folks start walking up the hills.  I am not sure which is faster -- a power hike up the hill or a shuffle.  I ran up the hills as best as possible and picked off a number of runners here.

I had memorized the point where the hill ended and as I crested the hill, I turned on the jets.  I had plenty in the tank and managed to haul it in during the last .75 of a mile. 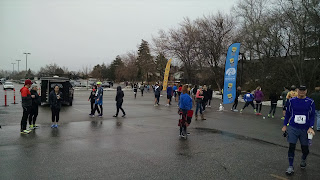 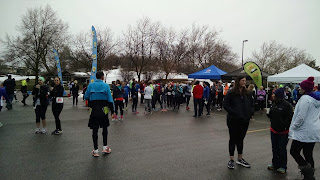 I had plans for the rest of the day, so immediately after crossing the finish line, I grabbed a few donut holes, a banana and some Gatorade and went to my car.  I grabbed my camera and snapped a picture or two.  I socialized for a few minutes with a runner I haven't seen since last year and wound up taking off no less than 15 minutes after finishing.

I wasn't devastated that I had finished slower than last year, but I really wanted to make some sort of improvement.  I think I didn't get off to a strong start.  Comparing my splits from last year, I did finish slightly faster, which is good.  I did bank some energy for the last push to the end, but the slow start easily cost me a minute.

The 10 mile race, which more or less combines the 5K and 10K course is coming up in a few weeks and that is another brutally hilly race.  Hopefully then I get a little bit of redemption!
Posted by Eddie Gaul at 5:52 PM