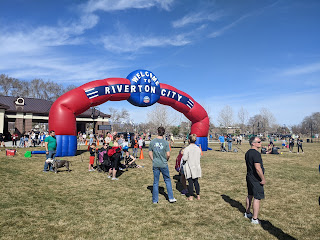 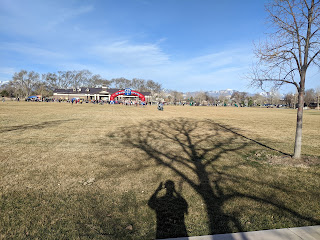 One of the spring races that fall on my racing calendar is the Riverton Fit for Life Half Marathon and 5K.  It comes at just about a perfect time as far as the weather goes. However, the weather can be a wildcard.  It is usually windy -- as most Marches are in Utah and it can also snow or rain.
So signing up for this race when it is cheapest is definitely a gamble.  I usually pull the trigger sometime in January, getting a fully supported half marathon for around $40.
You may be wondering -- "hey Eddie, the title says 5K but you signed up for the half marathon. What's up?"
Well, every since the Winter Striders 10K, I've been dealing with some hip, lower back, hamstring problems.  Since the time I've injured it, I haven't really gone beyond 6 miles and downhill running seems to bother it immensely.  Also, I haven't run over 8 miles since Las Vegas.
So my confidence in getting 13.1 miles done without have to resort to a walk was nearly nil.  Doing a 5K -- I could get through. Even if I had to walk.  So when I arrived at the race, I was able to quickly change from the half marathon to the 5K.  My ego took a hit, but I think my body thanked me. 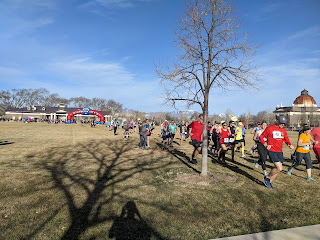 I arrived at the race site and was quickly able to get my bib, shirt and was ready to race.  I took a test of the weather: it was breezy and warm.  I was suddenly glad I wasn't running the half marathon.  A good portion of the course is southward and fairly exposed, so I know I would've hit a lot of headwind in the middle miles. 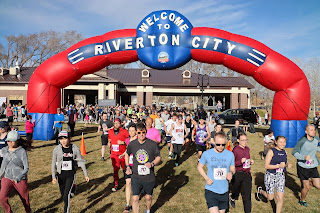 I did a brief one mile warm-up and it quickly became apparent that I didn't feel bad at all. In fact, I felt really good.  What sore hip, hamstring and back?  Maybe I could've done the half marathon after all.
My race started promptly at 9:15 and I had told myself that I'd go out at about 10K pace and see what I had after that. Was I racing? I told myself no, but you know how that goes: once a racer, always a racer.
Those plans were dashed pretty quickly as I blasted through the park, jockeying for a decent position as we headed towards a road that would take us to the bike trail.
The 5K is primary run through a residential area, past a golf course, and then dumping you onto the Jordan River bike trail.  The first 1.55 miles of it follows the half marathon course and I remembered many parts of it from the times I've run that edition. 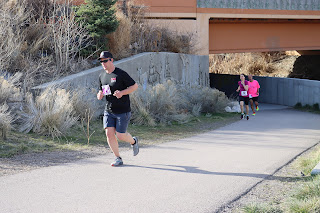 The first mile is along residential streets along the golf course.  Just at about the mile position we head down a steep hill -- just shy of a quarter mile in length.  It is a paved switchback and here I was able to let gravity pull me down towards the Jordan River Bike Trail.  I had to hold back a little because of my back, but it seemed to be happy this morning.
By the time I hit the flats, I was still feeling fast.  I had run a solid 7:30 mile and now I had the wind at my back.  I felt like I was running really strong -- how could I not after having executed a fast mile and with a 10 mile per hour breeze at my back.
I wasn't terribly familiar with the 5K course but I recalled most of it from the times I've run the half marathon.  As we came to the first aid station, I glanced at my Garmin and saw that I was half way done with the race.
I saw the runner ahead of me touch (or come close to the aid station) and turn around.  I got the impression that we were supposed to run a loop around the aid station but I saw exactly no one doing it.  Turns out, we *were* supposed to run a loop around the aid station.  I (and most others) probably shortcut the course by a good 10 - 15 seconds as a result.
Turning around resulted in wind blowing into me, which dampened my spirits.  I tried to find someone to tuck in behind, but I was running solo for the most part.  Also the thought of climbing the hill back to the start had me worried.
My next mile -- as a result -- was just shy of 8 minutes.  Still respectable, but without the tailwind and the massive downhill, my pace was right where it should be.  Could I manage a fast final mile?

I had measured the distance on the downhill and it was just shy of a quarter mile.  I recalled how many times I had done hill repeats up hills and if I dug deep, I could get up it and then hammer it home.
The hill eventually came and I got over it.  It was slow going at first and once I got over the steepest part, I wound up overtaking those that had charged ahead of me.  I focused on my form and just getting over it without wasting a lot of energy and when it became less steep, I got my turnover going and pushed a little harder. 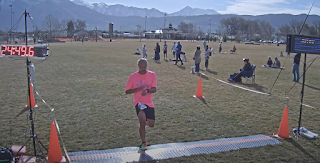 By the time I hit the top I hit my next gear and took off.  There weren't many runners behind me now and there weren't too many to try and pass but I bore down, calculating if I could still have a decent race.  I dropped a young woman who was working with me up the hill and it felt good as I got cheers and greetings from runners still heading out on the race.
I knew the rest of the way back to the finish line and the wind was no longer in my face.  Best of all, the remainder of the course was primarily flat.
I had lost a lot of time on the hill and facing a bit of a headwind in the initial part of mile 2 through 3, but I made up a lot of ground on it in the last half mile.  The final quarter mile was a bit tougher, as I had to run through the park's grass.
It was painful, but I got it done.  In the past, I might have given up on myself, but the times I've done quarter mile repeats and strides when I was hurting finally paid off.  I gave it max effort as I sprinted the last hundred yards. 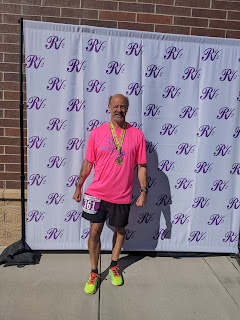 I wound up crossing the finish line in a relatively disappointing 24:45.  It is hard to compare this race to others that I have done -- it was the first time I've run this course.
Despite my pedestrian time (for me) I felt like I had run pretty well.  I ran the flat / downhill parts strong, and did the best I could with the uphill part.  Best of all, my back and hip felt good throughout the race.  This won't go down as one of the best runs of 2022 for me, but I'll take it as a moral victory.
I came in 2nd place in my age division (the 50 - 54 for the half marathon was stacked with talent year).  Unfortunately, awards were only given to first overall.  I was a little miffed about the course confusion at the turn around -- also I was told that the top 3 males all ran a good portion of the half marathon and as a result never placed. 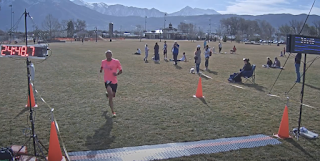 I paid about $40 for the race -- expensive for a 5K -- but a bargain for a half marathon.  I was incredibly sad not to be able to run the half, but my back, hips and my endurance weren't to be trusted that morning.  I still got a nice shirt, a timed race, a well organized race, and a ton of post race snacks at the end.  Plus a pretty nice finisher's medal.  Plus I had a ton of friends there to socialized with.  With the beautiful weather, it was just a great morning for comradery and running.
They also had plenty of free photos to borrow as well.
I am glad I didn't follow my ego on this race and force myself through a half marathon.  I have a feeling I wouldn't have lasted more than 6 to 8 miles.  I was able to make the most of the race, succeed at it and not pay too much of a price physically on it. 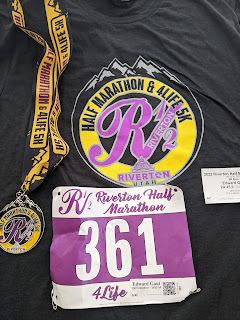 Overall, I was really happy with my experience from start to finish.  I plan on being here next year -- once again to try the half marathon.