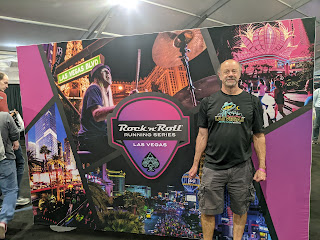 Every year since its inception, I've done the Las Vegas Marathon (from 2009).  I am one of a handful of legacy runners who shows up each year and participates in this event.  Way back when, this was the site of my first marathon and the race was a morning race in December.
Over the years the race has changed a bit.  It became a night run in 2011 and as of this year, the marathon appears to be forgotten (it was never very well received).
I'll be honest, most of the years (if not all), I run a race that I was hoping for.  Either I haven't prepared properly, I go out too fast, I have stomach issues, the weather doesn't cooperate -- something invariably goes wrong. I usually have more bad experiences then good when it comes to running this race.
Leading up to the race, I was filled with woe.  What would go wrong? Why do I put myself through this?
So I started to reframe the race -- I get to participate in this.  I should have fun and enjoy the experience of running down the Las Vegas Strip -- at night.  Not everyone gets to do this and you've trained hard to be here.
So I set out with 3 goals for the day: 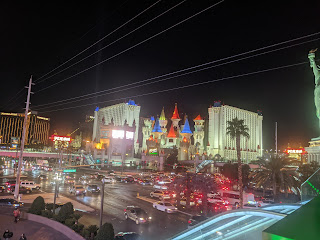 Packet pickup this year was held at Resorts World.  They had free parking and an easy-to-access area to pick up the bib.  It was crowded by the time I got there -- around 1 PM.  Fortunately, it was very easy to get my bib, circle around the expo.  I took a quick tour of Las Vegas's newest casino on the block. 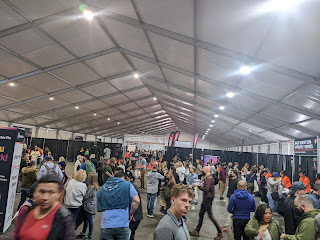 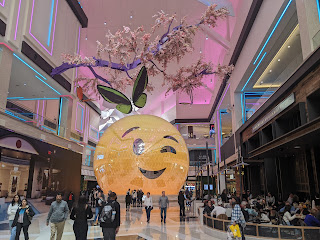 I then basically had to lay low for the next 24 hours until the race started.  Las Vegas is walking town and distances are deceptively longer than they look.  That casino across the street looks like it is a 2 minute walk away, but sometimes the jaunt takes closer to 20.
The race starting village was located behind the Planet Hollywood -- much like the 2019 edition.  With the race starting at 4:30 and my loading time beginning at 3:45 PM, I headed over there a hair after 3 PM and found myself waiting in a large parking lot along with thousands of other runners.  They had some entertainment and more Porta Potties then I've ever seen before.  I managed to kill the time in short order before entering the first loading zone and then eventually making my way to the starting line, where I had to wait another 30 minutes before the race start. 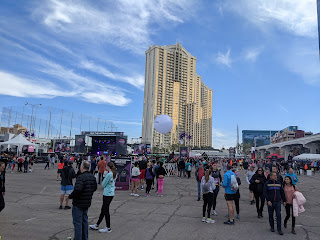 In years past, the race started and it usually took a good 20 to 30 minutes before I started running.  It just took quite a bit time for each group to start running.  This year, I had jockeyed myself into a pretty good position and they also had a metered output of runners -- so more runners could start running sooner.  It seemed to work and within about 5 minutes of the race officially starting, I was running. 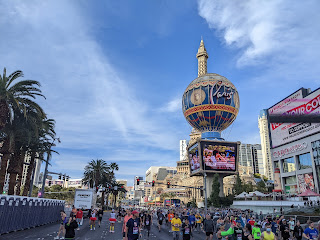 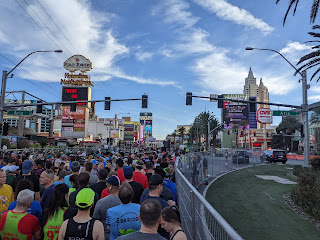 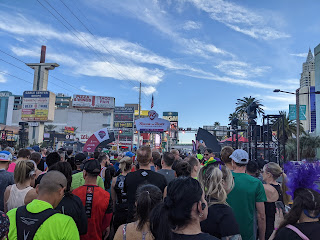 With my goal in mind of running consistent splits, I started off fairly conservatively.  People were passing me but I just maintained a fairly even pace.  I tried not to let the excitement of the race push me and I felt like I was doing a easy paced miles.  My heart rate felt easy and I definitely wasn't pushing it.
I felt like 9:30 for the first 3 miles would set me up to pick up the pace.  Unfortunately, that didn't really go to plan.  I was a little dismayed to run 9:10. 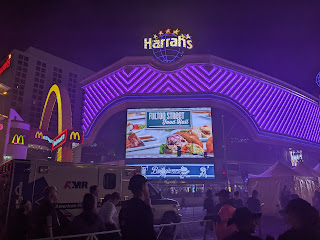 Midway through the start of the second mile I felt like my bladder was full.  I had probably peed a dozen times in the past 90 minutes but I think the nerves got the best of me.  I saw a set of bathrooms at the first water stop.  I decided to duck in and take care of business. I was actually shocked at how badly I had to go.  It probably set me back 20 seconds.
Having run this edition of the course several times now, I was relieved to make the first turn and start heading back towards the iconic Strip.  There aren't many turns in this race but mentally it was a dividing point for me.
It was warm and I was working up a good sweat.  I am not really trained for running in the heat but that would all change after the sun set.  But in the first few miles of the race I did wind up splashing some water over my head to keep cool. 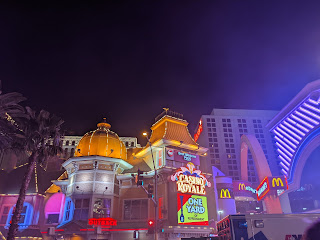 I hit the pace I wanted to for the first 5K -- a hair over 27 minutes.  I was still feeling good, but experience told me that could change.  It was still early to push the pace and start racing.  Again: goal #1 was to finish strong no death marches.  My heart rate was still in the zone I wanted. 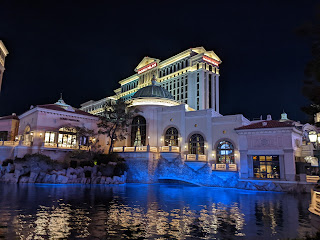 The problem was the crowd and cheering did start to work their magic.  Deceptively my pace quickened. I felt like I was running the same pace but I was stunned to see 8:45's show up on my watch.  Every now and then I dialed it back, but it was hard to contain as I was cheered on by random strangers.
I made my way north and eventually the crowds thinned out and the running got a bit more lonely.  Instead of crowds of people, I was now greeted by wanderers along the sidewalks and the occasional police man.  I was never really alone -- there were plenty of runners around me but the revelry of the strip got more gritty.  At the 10K point, it was definitely night time as well. 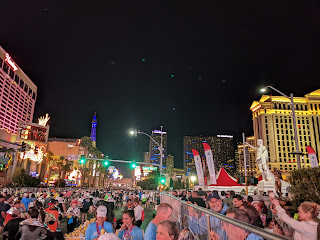 I was still holding the pace I wanted and in all honesty, I felt fantastic.  My splits were consistent and I felt like I could hold the pace indefinitely.  Always a good sign.
I was tempted to start "racing" at mile 7, but I decided to hold off a bit more.  Once I made the lollipop loop at the north end of the course and started my way back on Las Vegas Blvd I would up the pace a bit.
We finally made it container park and I witnessed the heat-inducing bursts of hot air from a mechanical cricket before making the final turn back to the Strip.  I felt great.  With 4 miles to go, I kicked it into a little faster gear.  I had this!  I visualized my normal 4 miles at home and how many times I had done 4 miles. 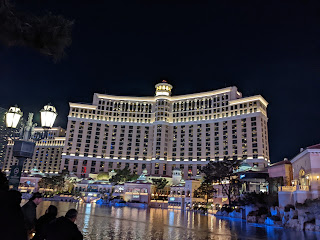 I started passing people. Could I actually be having a great race?
I didn't really know -- at times -- what my pace was.  It had gotten darker and as I've gotten older I can no longer read my Garmin at night.  Occasionally if I passed under a well lit section of street I could catch a glimpse, but I could no longer really monitor my progress.  But I felt fast.
I lost a bit of energy on mile 11 through 12.  I've always struggled with this mile.  And in all honesty, I felt like I had run it a lot faster than 9 minutes.  I was hurting but still making ground and passing a few others that had gone out too quickly.  I could see the Treasure Island tower in the distance, and it seemed so close -- yet so far away. 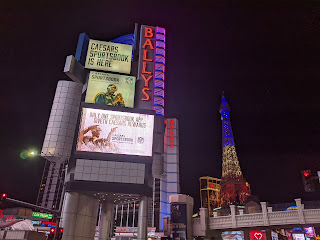 Once my watch hit mile 12 I gave whatever I had left.  I still didn't have a good sense of what my overall time was (and to be honest I didn't care) but I wanted to finish strong.  That was priority #1 for me.  My watch was off by at least .05 of a mile (probably from zig zagging) and I took it a quarter mile of a time. 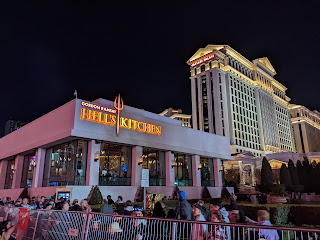 I could see the neon and pulsating lights in the distance.  The music grew louder and those around me also sensed the finish line getting closer.  The crowds had returned and I received more cheers from people.  I gave it all I had once I heard the familiar announcer's voice cheering people on.
I cross the finished line, arms held high.  I did it!  I had what I would deem a "good" race. 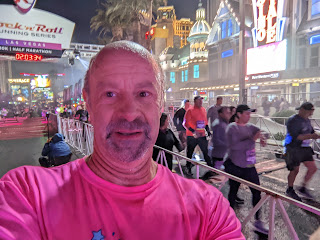 I was ecstatic to see a 1:57:30 on my watch.  Definitely not my fastest half marathon time, but a decent one for the first one of the year for 2022.  I finished with a smile on my face, unlike the last few I've done where I've suffered the last few miles.  I had accomplished 2 of my 3 goals.
I took a few pictures of the finish line area and began my long walk out of the chute.  The finisher's area is no joke.  It is a solid half mile walk before you can exit the area.
They had plenty of refreshments: chips, water, Gatorade, bananas, fruit snacks, etc.  One thing that was missing -- and it happened in 2019 -- no bathrooms.  Fortunately, I didn't have an emergency this year, but I could've / would've like to have gone. 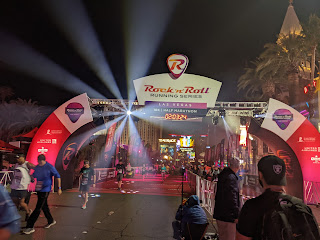 So the race this year was done well.  The starting zone was done correctly, I was able to hit my paces early on and everything was just well staged.  I was miffed about no bathrooms at the end, but all things considered, this race was executed well.
For me, I ran perfectly.  No, this wasn't a personal record -- not by any means -- but it was a huge confidence boost.  I was in shape to run a decent half marathon and I paced it perfectly and the last 3 miles weren't awful. 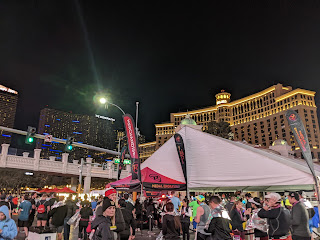 I registered for this race way back in 2019 at the Expo.  It's been sitting in my back pocket for a while.  It is a pricey race, but all things considered, a value.  Given the logistics of this type of race, I was happy with my experience and price paid. 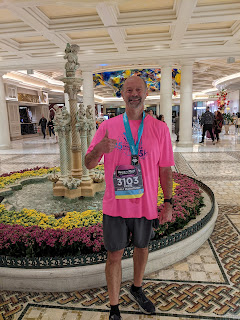 I was happy with the shirt and I got a new shirt when I registered for the 2023 edition.  The medal -- I'll be honest -- was a little smaller. It was heavy and it you can split the medal revealing 2 cards, so it was more than just a simple medal.  It probably won't go down as my favorite though. 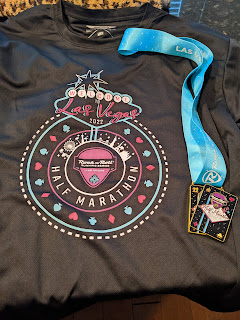 Once again, I was buzzing over my race experience for several days after the race.  The joy of it was a bit diminished to see that over a hundred other men in my age division finished ahead of me, but I had done well.
Normally after racing this race, I am left wondering if I want to do the race next year -- or if it'll be my last one, but now, I can't wait! 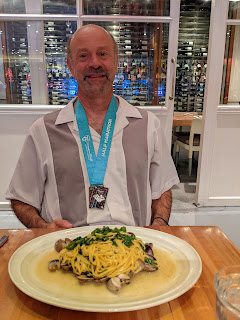