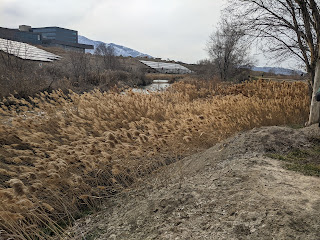 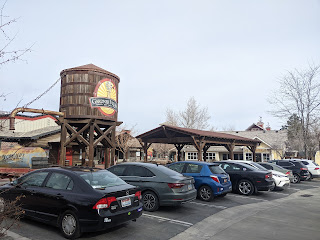 During the Black Friday sales around Thanksgiving time, I wound up signing up for the Lucky 13 race - a St Patrick's Day themed race (of sorts).  I've done it pretty much every year since it's inception (It took a break it would seem after the inaugural 2014 race).   It is a local race that is held at a local shopping area in West Jordan -- just a few miles down the road from where I live.
The course itself is held on the Jordan River Bike Trail and I'll be honest, I've run along the trail more times than I can count.  It is actually my training ground.  It seems weird to pay for a race that I can run on at any time but as someone who loves to race, it is like competing on my "home" court.  On the plus side, as well, there is no course anxiety -- I know it and where it goes. 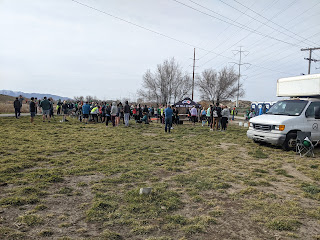 I wound up getting my bib the day before the race. The packet pickup was at the Gardner Village shopping center. Running there was a bit of a shakeout run -- 1.5 miles each way.  It helped me avoid the lines and any stress about getting my bib / shirt.
I showed up about 45 minutes before the race, parked and went to the race start.  Normally, the race starts and finishes at a common area in the mall.  But the city is doing sewer work and the walkway from the center to the bike trail was blocked off.
The race started at a clearing about .15 miles from the normal start of the race.  It was windy and chilly but temperature-wise -- great running weather.  Also, unlike last year, the air was dry and not a downpour.  I missed the clean bathroom that the shopping center provided, and I am also happy the air and ground were dry.  It could've been a quagmire.
There were 3 races: 5K, 10K, and half marathon.  The half started at 9 AM and each other race started 15 minutes later.  My 10K started at 9:15 and I was off and running after a very brief warm-up.
I half figured that today wasn't going to be a personal record day.  It was too windy, but I could make a good effort and see what sort of time I could turn in.  My goal was to go out at a dedicated 10K pace (low 8's) and then give it all I had on the way back with the tailwind.
The wind, while strong, wasn't as bad as I thought it was going to be.  However, I was running with a fellow who was a bit bigger than me and running a little faster.  I wound up tailing him for a the first mile or 2 -- using him as a shield.  The strategy seemed to work -- holding onto a 8:12 pace for the first two miles.  I couldn't ask for a better time as far as what I wanted to accomplish.
The course is run along the Jordan River Parkway and is a paved, multi-use bike trail.  You are surrounded by scrub, shrubs and of course the north-flowing Jordan River.  It isn't the most scenic course, but it does have its charm -- and it is as flat as it can be.
However, all good things must end and eventually the runner started to pull ahead.  I was really hurting as I approached mile 3.  The wind had taken a lot out of me and the pace was now getting harder.  I couldn't wait to turn around.
The turn around was at the 2nd age station.  I was a little dismayed that it was at 3.03 miles.  I think if the course had been run from the shopping center, it would've been close to a legit 3.10 miles.
As soon as I turned around, the wind stopped and I felt a sense of renewed energy. Finally!
It was empowering to get some cheers and greets from the 10K runners behind me.  I didn't see anyone in my age group (from my best guesses) anywhere close to me.  But still, I've been wrong about age before and while the last few miles I didn't see another person behind me, I still wanted to try and catch the runner ahead of me. 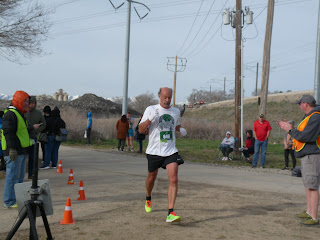 I did hit a stretch of head wind around mile 4.25.  It seemed like the longest half mile as I ran west near the Sandy City Golf Course.  The wind had been blowing form the south and also evidently from the west.  There was absolutely no way to take shelter.  Hence my mile 4 to 5 time is a bit of a dip.
I knew I was getting close to the finish when I got to the 5K turn around.  I was working on navigating my way through the multitude of 5K runners.  It was also encouraging to speed past the 5K participants.  As a racer, I really do enjoy feeling like an "elite" athlete -- although I am anything but of course.
The final mile I was pushing hard.  While I knew the course was short and no one was behind me, I knew I could calculate what a "real" 6.2 mile race would equate to.  I was loving the tailwind and I was still feeling strong, despite some occasional moments when I thought my heart would jump out of my chest.
Finally I jumped over the final bridge and hauled it to the finish line.  It was a bit disheartening to see that the finishing arch had come down  -- presumably from the wind but I crossed in 48:43 for 6 miles.

It is never really satisfying not to know your time for an official course.  But running calculators estimate my finishing time of 50:30-ish.  You just never know what final push I could muster up to shave a few more seconds off of it.  This is definitely a sold performance -- despite the difficult circumstances.
Either way, I finished first in my age group and 15th overall.  And to be honest, I felt fantastic when I finished.  Sure I was tired, but I still felt like I had run a nice race -- my splits were the most consistent they've been in a long time. 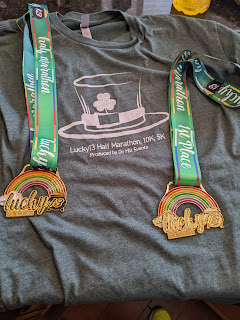 Post race refreshments included drink and ice cream sandwiches and fruit.  It was chilly but I managed to get 2 100 calorie ice creams down.  My car was parked a bit away, but I trekked over to it and grabbed warmer clothes and my phone.  By the time I got back, awards were being doled out.
I really like the finisher / awards medals.  They are heavy and well designed. I love t-shirts, but I like the 100% polyester ones.  This was a blended one.  It will go into my St Patrick's themed race shirts collection (I have a ton of them).
Overall, I was happy with my experience.  $30 for a supported / timed 10K race isn't a bad deal.  It was also fun and I got to see a bunch of local running friends.  I'll likely run this race again next year.
Posted by Eddie Gaul at 10:37 AM