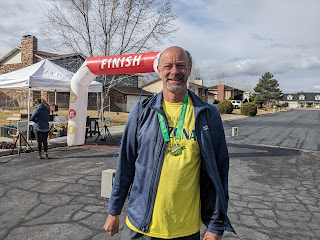 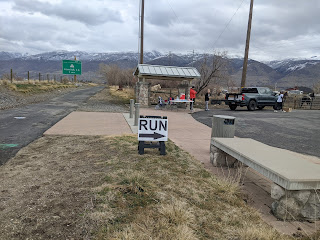 For the last half dozen years I've done the March Madness race in Bountiful - about 25 minutes north of where I live.  The location almost always changes every year (to some degree or another) but the race is the same -- a 5K, 10K or half marathon for a bargain basement price -- generally less than $30 for the half and about $20 for the 5K / 10K.
The race also supports the Bountiful Food Pantry, so the money raised supports that organization.
This year, the race was held at West Bountiful Park.  A few years ago, this was the race's headquarters and it moved a time or two to other locations near the Legacy Bike Trail. So large swatches of it remain consistently the same I've run the course (or variations of it) many times over the years in various weather conditions: from rain, gale force winds, to generally mild March weather. 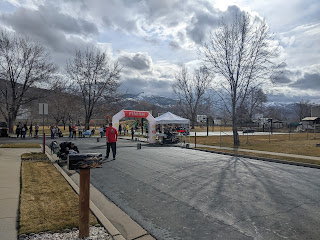 I arrived at the park about an hour before the race and quickly grabbed my bib.  I made a few trips to the bathroom, did a short warm-up and declared myself ready to race.
Going into the race, I told myself I was racing it but definitely not all out,  My legs were still beat up from last weekend's half marathon and I definitely didn't feel 100% as far as racing went.  I still suited up for the event -- wearing my racing shoes (Saucony FastTwitches), light gloves, shorts and a t-shirt.  For appearances sake, I was in race mode. 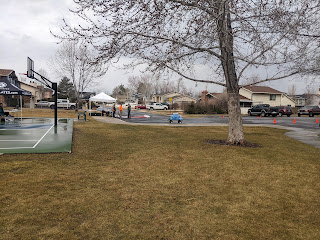 The race started promptly at 9 AM and I lined up about 10 people behind the lead back and started running.
The race had about 200 people (the park's limit) and the participants were running one of three races: the 5K, 10K or half marathon.  It was hard to tell who was running what race but I just worked on keep a low 8 minute per mile pace as I made my way west towards the Legacy Bike Trail.
It took a little over a mile to reach the bike trail and I was hitting what I wanted to.  Despite my reluctance to run really hard, I felt it was easy to hit slightly above my target pace.  The first two miles went well -- 7:59s.  But could I hold onto this pace?
The speedier 5K runners were already headed back and now I was running with the half marathoners and faster 10K runners.  As I got deeper into the 10K I saw a few lead runners heading back.  I don't think I made much of a mental note of how many of them that there were but there weren't that many.  It just looked like I was the only one over 40.
I reached the turn around point after hitting an 8:06 mile (I was slowing down a bit).  I looked over my shoulder to see if anyone was following me back towards the start line, only to discover that I was running solo.  I could barely make out another 10K runner ahead of me and I didn't see anyone behind me.  Was this it?
I was still feeling pretty strong but I had my doubts that I could hold the pace that I was running. Usually after the turn around is where the pain sets in and you know it is going to get worse.  It takes a lot of focus to maintain the pace.  But at the same time, with no competition, I let myself drop my pace a bit.
As I made my way back, I was given words of encouragement from those behind me.  I felt like an elite athlete as I powered through another 8:06 mile despite the head wind.  While I was grateful, no one was behind me, I think I needed someone to scare me to not let up.
I definitely had to dig deep from mile 4 to 5.  I kept willing myself forward.  If only I could get off the bike trail and onto the neighborhood streets again, I'd be so close (yet, I still had another mile to go once I hit that point)  The bike trail is mostly flat, but it isn't super scenic as traffic from the Legacy Freeway whizzed by me and all I wanted to do was see Pages Lane again -- at least then I'd know I was getting close. 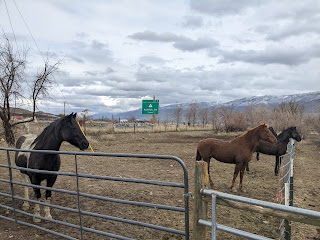 The last mile is a bit uphill.  I knew it would be and it isn't anything substantial, but it wears you down.  Mile 5 is always the toughest of a 10K and I was still shocked that I couldn't see anyone behind me and once in a while I could make out another runner well into the distance ahead of me.  I still had no idea where I was in overall placement, but I figured I had my age group pretty well sealed.
Occasionally I passed some 5K walkers, which was motivating but again, I was running solo  I was dismayed and not entirely surprised to see an 8:30 mile come up on my watch as I lumbered towards the final quarter mile. 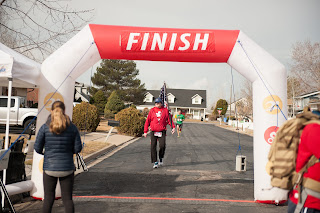 Despite not having any competition, I really pushed hard the last 90 seconds.  If anything, I could impress myself with a sprint-to-the-finish photo at the end.  I think I closed the final .2 of a mile at 5K pace.  It turns out I did have a bit more in me than I thought I did.

I crossed the finish line in a hair above 50:30.  The course was certified and measured 6.20 miles on my watch - so definitely a legitimate time.  Despite feeling pretty beat up before the race, I ran extremely well.  I had predicted I would finish in the 51's, so finishing nearly a minute faster felt good.
I was immediately handed a glass 3rd plate overall.  I knew they gave out prizes almost immediately upon crossing the finish line, but I was pleasant surprised to get this even cooler award (in the past they've given out mugs).  I also didn't think I would be recognized for 3rd overall -- I knew I had the age group win in hand though.  So definitely a bonus.
The race had some snacks and I wound up socializing for a bit afterwards.  They had predicted some dire weather forecasts for the day, but all in all, it turned out to be a great day for running.  Mid 40's for temperature and only a slight breeze.  I know in the past I've run this race in gale force winds.
This race continues to be a bargain and one that I always put on my calendar each March.  It is cheap, well supported and professionally done.  The stakes are pretty low but I still enjoy it and it makes for a great test of fitness.  It is also a wonderful social event in that many runners of all abilities are able to participate and have fun.
Posted by Eddie Gaul at 6:21 PM