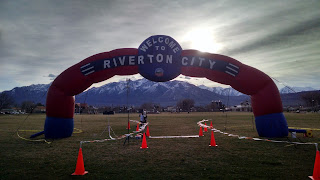 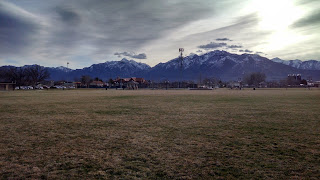 It''s been a while since I've done the Riverton Half Marathon -- a city on the south side of Salt Lake County.  I always had fond memories of the race on account that it is probably one of my favorite courses.

It seems like every year the race comes up and I am out doing other things.  This year I made it a point to do the race.  And I got in just in a knick of time to get the discounted race price of $40 (for a half, that's a steal). 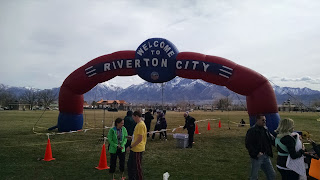 All week long they had been predicting everything from torrential rain to a blizzard.  In fact, the race director sent out an email during the week warning runners that the race could be canceled (I believe it was canceled a year or so ago).

Either way, the weather turned out to be pretty darn nice.  It was warm enough for a single shirt, shorts and throw away gloves.  I also opted to leave my Solomon water pack behind, presuming I'd use the aid stations and to be honest, it just wasn't that hot.  I also knew, as much as I would've liked to have, I wasn't going to take any photos on course.  So I was happy not to have the extra weight.

The only problem with the day was a pretty strong south wind.  I was hoping it wasn't going to be as bad it seemed, but it was worse.  But I'll get to that in a moment. 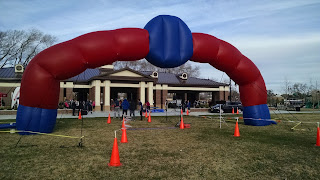 The race started promptly at 9 AM.  In years past, the race started in a different spot.  This time, it started on the grounds of the city park (which had nice bathrooms).  My hunch is people were complaining about impacted streets and there was construction along the home stretch, so they've changed the course quite a bit.

I hit the ground running and immediately my rib started to hurt.  Not from running too hard, but from last week's fall at the half marathon I did.  I had substandard training all week but I felt like I would hardly notice it today -- once again I was wrong.

I don't think it slowed me down at all, but it was a present force, reminding me that it hurt to breath a little too deeply.

The first 5K went fast.  I was moving quickly and despite having done 3 half marathons in the past 3 weeks and having a busted rib, I felt alright.  I had a hint of fatigue in my legs but I had confidence that I'd be able to get through this race.

The race gets you down to the southern side of the Jordan River Bike Trail (compared to where I live) and there were some sections of the race that I had done just the week before.  Oh how I wish I could turn the page back to last week when I felt a little stronger.

I don't get to run on this stretch of the bike trail very often (I just always go north) and it is just as pretty but a little more barren then where I live.  It is also a bit more hilly.

We'd run a few miles on the bike trail, dip into a hilly neighborhood with some expensive houses and then hit the trail again.  I was tailing the 1:55 pacer as I knew that I could probably handle that pace.

There were a ton of turns on this course and all but one section was marked really well.  Plus the race had several hundred runners, so I was always within site of someone.  Memories of previous years I had done the race visited me as I tore through the miles.  Again, some of the course I didn't recognize, but a lot I did.  Mile markers were hit and miss.  They never 100% lined up with my Garmin but they were close enough.

Around mile 6 my race went downhill.  We hit the southbound stretch and there was no blockage of the wind at all.  It hammered me at what seemed like gale forces.  While it wasn't that bad and the forecast said it was 10 mph, my suspicion was that it was quite a bit stronger than that.  Everyone's pace was hit hard.

However, I seemed to fair poorly.  My legs felt heavy and fatigued (my lame brain idea of doing a half marathon every Saturday in the month of March likely the primary culprit).  My spirits were down as I people passed me with what seemed like playful abandon.

The problem was that this southbound stretch lasted a good 4 miles.  And it just broke me down.  When I saw a turn off for the 5K, my head tried to talk me into calling it quits and just hoofing it back finish area and skulking away.  But I had set out to run a half and I was going to do.

My pace was hit hard here and I used a fair amount of energy trying to put something together.  But it just wasn't happening.

Also, I was thirsty.  They had good aid stations with water and Gatorade every mile and a half or so, but this stretch there weren't that many.  Also, it seemed like I couldn't get enough to drink.  I was cursing myself for not wearing my hydration pack.

Around mile 10 I started to nurse a gel.  I figured it couldn't hurt. I suspect it was too late but it seemed to help a little, judging by a small pick-up in pace.  It was also at this point that I was done running south on the windy bike trail.

The last 5K is on some back roads (including a dirt road) towards the finish line.  There is one killer hill there but I think with the change in the course I didn't have to run all of it.  I was pretty toast though and after the 10.5 mile marker, I don't think there was another water stop.

I was really shot at this point and I was so tempted to just start walking.  But there was going to be none of that today and I forced myself on despite feeling really crappy and wanting to toss my cookies.

I had some friends cheer me in during the final .1 of a mile.  I really tried to turn on the jets for them but I felt like I was running through sand.  I just had no turnover.

I crossed the line in 2:04 and change.  It took a while for my stomach to settle down and I felt like I had run way more than 13 miles. But my Garmin said this course was accurate (various reports indicate it might've been long but my Garmin measured up nicely). 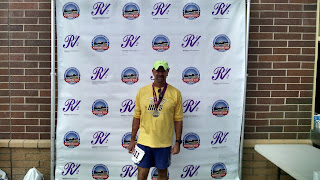 
This race is super competitive.  I've never even come close to placing in it.  Today was no exception and to be honest, I really didn't care all that much about my performance.  Sure, I am disappointed about it, but I was gassed to begin with.  I mean I have run a bunch of half marathons this month -- at race pace -- and I did well at 3 out of 4 so if I really cared deeply about my time I would've tapered better for this race.

It does hurt my ego a bit to cross over the 2 hour limit, but after chatting with people, most people in my time bracket said they were 5 - 10 minutes slower....


I grabbed some water and eventually a couple of chocolate milks and a banana.  In the past they've had a really good spread of food.  I am not sure what happened but there apparently have been some cutbacks.  I suspect some of the vendors offering free samples have backed out.

I socialized a bit and basically killed an hour at the finish line chatting people up and complaining about the wind.

Once again, I really enjoyed the race.  It was very affordable, the medal was definitely nice and the shirt has probably the most unique colors ever on it.  And I love the course.  There was so much variety -- bike trail, residential roads, dirt roads and with the backdrop of the Wasatch Mountains and the Jordan River.