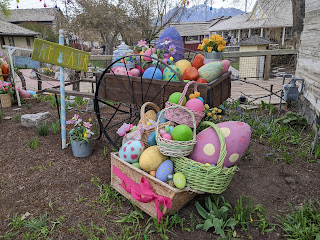 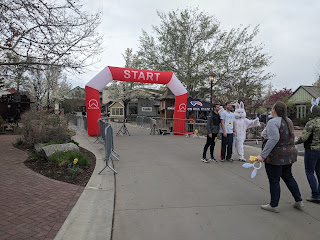 So I signed up for the Eggs Legs 10K race back in the winter months.  OnHillEvents, the organizer, always has a sale around Black Friday or Christmas.  I wound up scoring this race for about $30.
I've been dealing with some back issues for well over a month now.  Sometimes I can run -- but always with stiffness and ultimately pain, or sometimes I last about 10 steps.  So doing, let alone racing a 10K, was kind of out of the question.
The race organizer, when I arrived to get my bib on Thursday, kindly allowed me to switch to the 5K. At least if my back didn't hold out, I could get through a 3 mile walk with friends.
So I prepped up the night before the race.  I wound up taking a muscle relaxer (which kind of made me loopy) and then an Aleve the morning of.  I hate relying upon pain relievers and NSAIDs, but this definitely did the trick.  I had zero problems with my back on this race.
Either way, I arrived with the intention that this race was likely going to be a "fun" run or at least a walk at the worst. 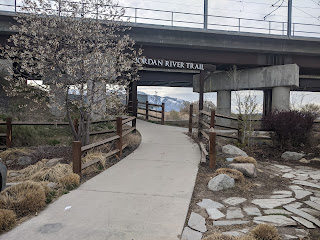 So I rolled into the race just shy of 8:15 for the 9 AM start.  I wound up chatting with plenty of people and getting in about a mile warm-up.  Again, I had zero problems with my back / hip but that didn't mean I was in the clear.
My goal was to go at about 10K pace for the first mile and then if my back gave me the all clear, rachet up the speed a bit.
Around 9 AM, 250 5K runners lined up at the Gardner Village shopping center and bolted out of the starting line.  There was a 10K and half marathon which had started 1 and 2 hours before our race, so while we were heading out, racers were coming in -- it wasn't as bad as it sounds -- the other racers were pretty thinned out and they weren't as highly attended.
I started off strong, racing in my Saucony Fastwitches.  It was cool out so I wore shorts and a short-sleeved shirt.  I had pocketed my thin gloves.
The race starts off at the eclectic shopping center before heading south on the Jordan River Bike Trail.  This is my "home" course, being that I run it quite a bit.  So I knew every crack in the sidewalk, turn and bridge we had to cross.
This race is also popular with newer runners, so lots of kids and casual runners.  So I wasn't too surprised to be in the front of the pack.  I was all about surviving this race, taking inventory on my back every minute -- wondering how much borrowed time I had. 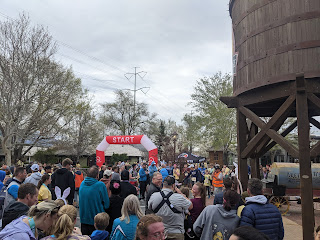 During the first mile -- as usual - I felt in control. A nice solid pace and it didn't seem to crazy.  I had done a speed workout earlier in the week and I had to cut it short due to back issues.  But as the first mile went on -- my back and hip were quiet.
I was shocked -- no stunned -- to see a 7:47 come up on my watch for the first mile.  And I was running into a very mild headwind.  I thought I was supposed to go at 8:15 pace?
Mile 2 is usually where things get difficult. I was running into returning half marathoners and 10K runners but there really wasn't much competition.  The nearest person ahead of me was barely within shouting distance and I didn't dare look to see who was coming on my back. 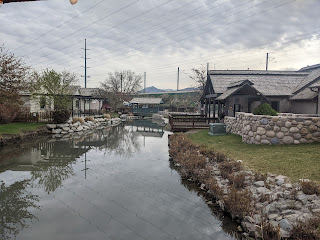 Exactly at 1.55 miles, I reached the turn around.  Finally, a full length 5K!  And best of all, I had a nice tailwind to work with and my body was holding up.
I got a sense of who was behind me on this out and back course and from what I could tell, my competition was still in the hunt.  I figured I had a lock on something in my age group (you just never know) but I was running well -- could this be my "day?"
I finally got to the first bridge to cross the Jordan River and I felt something in my calf just tighten up.  Each step it got a little worse.  Last weekend during a training run, I got a very mild calf strain.  For intents and purposes I thought I was over it.
Each step it got tighter and tighter and by the time I crossed the bridge to the final half mile stretch it was hurting.
I glanced behind me, fearing an angry mob of 50+ year old runners chasing me down  I had just blasted a 7:46 mile and if I could knock out the final one at that pace, I'd have a sub 24 minute 5K.  However, no one was behind me. 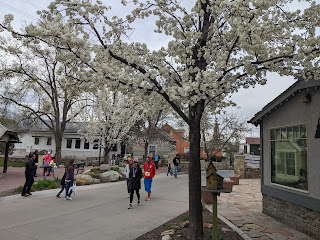 I was still running into trailing 5K runners on their outbound and they cheered me on.  It really helped.  But I was definitely running with an odd gait and every step I took with my right leg, hurt.
My paced dropped dramatically.  I had whatever place I was in line for pretty much locked up, but I still was hoping to go sub 24 minutes. 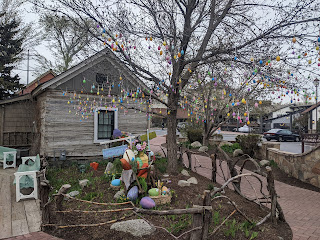 The last quarter mile or so of this race is quite a few turns.  There is also a bit of a hill as you leave the bike trail and into the shopping area.  It isn't bad, but it always slows me down.  Also the finish line is still a solid .1 of a mile after entering the parking lot.
My calf had calmed down a bit but it still smart. I definitely had enough though to crush it to the finish line.
I had finished -- everything had held up! 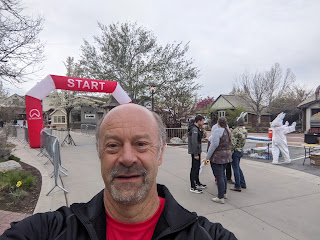 So my time wasn't the fastest ever - but this was a moral victory.  I think if I had had a choice, I would've sat this race out, out of fear of my back giving me issues.  But I was all in after the first mile so long as my body would hold up.
This pancake flat course today was good to me.  I ran really well all things considered.  I just wish my calf hadn't blown up on me.  I have a feeling I could've taken off a bit more time. 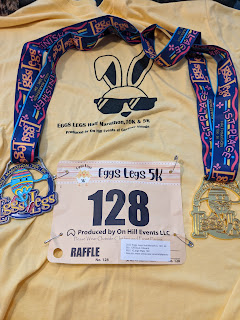 I did wind up winning my age division.  There were quite a few friends of mine at the finish line, so it was social hour.
Post race snacks were cheese sticks, drink, oranges and granola bars.  I was looking for the ice cream sandwiches, but I didn't see any.
Overall, it was a great morning for racing.  My time was for the most part, pedestrian, but anytime I can knock out the first 2 miles in under 8 minutes I am pleased.  I would definitely like a gimme on the final mile -- I think I could've done quite a bit better.