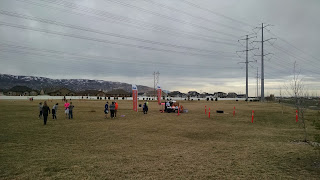 
As usual, I was looking for something to do and up on the race calendar I spotted the March Madness half marathon -- about 20 minutes from my house.  I hadn't seen this race last year and I think it is a new group putting on a series of races.

They had a super attractive price to boot -- $45 and I went to their Facebook page and discovered they had a 20% off code as well.

I talked a running friend into the deal as well and before I knew it, I was registered for my second half marathon of 2016.

We rolled into Woods Cross with plenty of time to spare.  I had figured I'd get there around 8:15 (for a 9AM start) and instead was there at around 7:45.  Luckily I had someone to chat with so that helped to pass the time.

I had registered on the last day to still get a t-shirt.  I wasn't too surprised when I saw that it was a cotton one.  Either way, packet pickup was a cinch and for the roughly 100 people that showed up for the 5K and half, they had enough bathrooms.  The goody bag was filled with mostly ads for sponsors but it was stuffed pretty well.

The course is run on the Legacy Bike Trail.  I've been on the trail already about a dozen times for various races (when I moved here it seemed like every race was held on that trail).  I am happy to report that it is largely flat but not terribly scenic.  Basically it is just bike trail and on one side you have the freeway and on the other wetlands or another freeway.  Luckily it isn't trafficky so you aren't inhaling exhaust the entire time.  In spots, it is nice but having run on it a bunch of times, I'd rather have my Jordan River Bike Trail.  Also, the trail was filled with a lot of recreational cyclists, so passing or cutting the corners required a quick check over your shoulder.

I didn't have any real goals in this race other than to run sub 1:50.  I had had a fantastic race about a two months ago in St George and I had hoped that maybe I could duplicate that feat.  While it was slightly windy the temperature felt right and I knew the course.

So I took off slightly aggressively.  It always amazes at me at how easy the first couple of miles feels.  It also didn't hurt to have a slight tailwind.

I hung on pretty well and hit the 5 mile marker at about 40 minutes.  However, at that point, the southern wind turned into a mild northern wind and suddenly it felt like a lot more effort to maintain the pace.  I wasn't too surprised to see my splits dropping.  However, if I could somehow hold an 8:30, I'd be thrilled.

The turn around came at just about 6:52 miles.  I was really worried about my splits and the distance because my Garmin had lost connection in a tunnel that took a good minute to cross.  The race director had measured the course with an ATV and his watch so he was confident that it was 13.1 miles (or real close), which I do believe.

The last half of the race got real ugly for me.  While my splits, looking at them now, aren't terribly bad, it just felt awful and each mile from 7 on, just felt terrible.

There were only 4 water stops in the race, at 2 miles, 11, 5 and 8.  For a warmish and somewhat humid day, I found myself sweating heavily after 2 miles and dying of thirst at the turn around.  I had thought about bringing my water bottle, but didn't want to be bogged down.  I also questioned, "How bad could it get -- it is only early March after all?"  Apparently bad enough.

The last 3 miles couldn't end fast enough.  I still couldn't believe the splits I was hitting though and I felt like I was in the last 5 miles of a marathon.  I just kept hoping I had banked enough time to go sub 1:50 again.

The last mile I kept pushing myself but I couldn't muster up anything.  Normally I can sprint the last 100 yards or so but there was absolutely nothing left.  I wasn't feeling on and it just seemed to be a struggle to get oxygen.  Also coming off a fairly high mileage week, my legs didn't have a lot of spring to them.  I was even beginning to question whether I was getting sick or having a more serious ailment.  I just felt off.

I was actually fairly relieved to cross in the low 1:51 range.  Also luckily everyone was pretty spread out so I didn't feel awful as people passed me.  I felt like I was running solo the entire second half of the race. 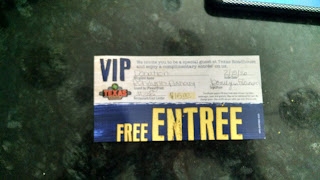 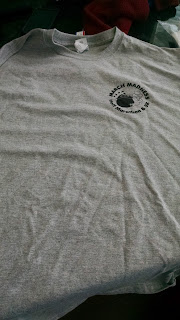 I collected my finisher's award and made small talk with a few people.  I had met the male winner before and we caught up with one another.  I hadn't seen him since an August half marathon I had done.

They were pretty spot on with the results and while I figured I had a pretty good shot at an age group award, I saw that the age groups were 10 year increments.  They were giving away very nice award plaques, but unfortunately I came in 6th.  Perhaps if it had been in the traditional 5 year increments I would've gotten something.

However, my bib was drawn for a $15 food voucher for a local restaurant.  Score!

I grabbed some water and some pizza (they had fruit and cookies too).  For a cheap race, they actually had plenty of food and for the price I paid (about $40) I felt like I got a fair deal.  I just wish they had had one more Gatorade stop.

Mile markers were accurate and I am happy that the race was pretty small.  The course was easy to navigate and marked well enough.  The race wasn't chip timed so it was every man for himself.  Again, I know the turn around was roughly 6:53 miles (on my Garmin) so I know the course was fairly legit.

Overall, I'd run this race again, especially at the price they offered it at.
Posted by Eddie Gaul at 3:12 PM