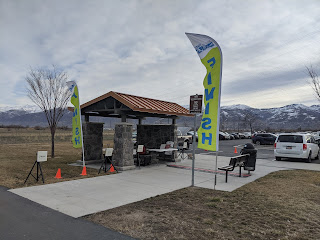 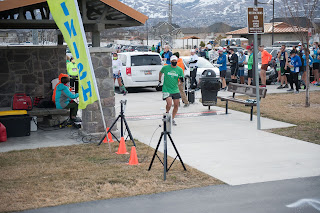 Just about every March, I sign up for the March Madness Half Marathon.  It is probably one of the better bargains as far as racing goes: if you sign up during its initial week, it is a $30 race.  Plus, it also supports the local food bank.
The only drawback, about the race is that it usually is a wild card as far as weather goes.  Every year I've done it, the race has posed certain challenges, whether it be rain, cold or wind.  That's just normal life in Utah for the month of March.  This year, I suspect was pretty close to ideal -- with one exception: the wind.
Either way, I am good with it and it is an easy drive and usually a good time.  The race also sports 3 distances: a 5K, 10K and half marathon.  Having just done a successful solo half marathon this past winter I decided I'd give the half marathon another go this year. 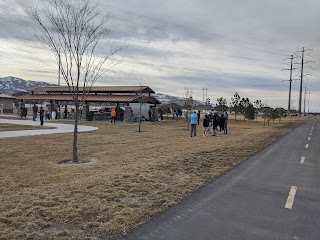 The race was held at the Mountain View Park Trailhead along the Legacy Bike Trail.  I've done a race or two at this park before and have run along the trail from time to time in other races or even on my own (Note: some course photos are NOT from this particular race)
Race start was at 9 AM and I got there just after 8 AM.  Packet pickup was easy and the race started promptly at 9 AM.
The weather was sort of chilly -- at least while waiting in line to pick up my bib.  I had shorts and a single shirt on with a running jacket.  I knew I was going to ditch the jacket though.   There was a decent wind from the south but it didn't seem that bad.  Would the race actually have semi-perfect weather for the first time in its 6 year history? 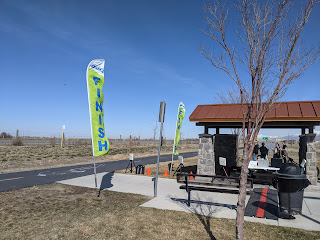 I wound up going with the shorts + 2 t-shirts and some cheap gloves.  I regretted after a mile or so wearing the two shirts.  I was feeling pretty warm.
Most of the racing charts put me finishing around 1:52 or so, given my training times.  I had also done some trial half marathons on my own, finishing each around 1:53.  I was definitely concerned about the wind but it didn't seem that bad.  A few years ago I did the half and got pummeled by it on the way back.  The memory of me shambling back to the finish still haunts me today. 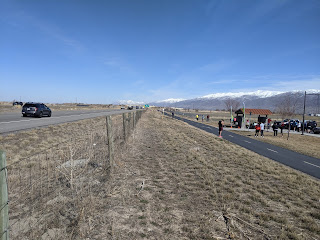 The race starts off by heading north along the Legacy Bike Trail.  My goal was to hit the first three miles at 9 minutes / mile.  I definitely wanted to bank energy for the return trip and start off easy.  I was monitoring my heart rate too to make sure I wasn't working too hard.
I wasn't too shocked to hit the first mile at 8:30.  I didn't feel like I was the benefit of a tail wind, but I was.  My heart rate was about where I wanted it to be as well.  I tried to dial it back a bit.
Suffice to say, I completely failed at holding it back.  I went through the first 5K in about 25:20, which was 5K race pace a few months ago.  And to make matters worse, I went through the first 10K in 52:10.  But it was easy and I was running with a bit of a tailwind.
As I was running I kept looking at the vegetation around me.  It wasn't moving much so I figured I wasn't going to get slammed on the way back.
However, around mile 5 as we ran along the bike trail near I-15, we did get a headwind.  I commented to the guy running next to me, "Did the wind just shift?".  He was just as confused as I was. 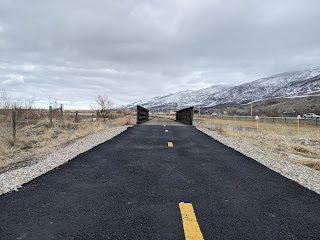 I was feeling pretty worn down by the time I got to the half marathon turn around.  I had run a series of 8:30's and felt like if the wind didn't hit me, I could probably go sub 9 for the rest of the race.  When I did turn around, however, I was greeted with a gentle breeze but nothing too crazy.  Whew, maybe the wind wasn't going to be a factor.
I felt pretty strong and my times were going better than expected.  I knew I had gone a bit too fast but I could hang on.  However, once I reached the 8 mile mark, the wind hit me up.  I've certainly dealt with worse but it seemed like I lost all hope.
Suddenly, maintaining my 8:30-ish paced seem a lot harder.  A guy who was tailing me for most of the race suddenly dropped me and I kept looking down at my Garmin in hopes that the pace I thought I was running was actually wrong.  Nope. 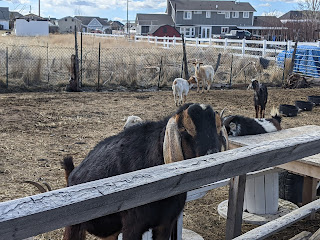 I kept just plugging along in hopes that I'd get a break from the wind.  Every now and then it did die down a bit but not for long.  Also every little hill that I had gotten the benefit from on the way out, now seemed like a giant one. 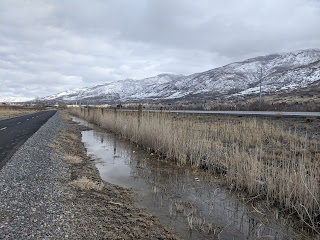 The final 3 miles were humbling.  All things considered my pace wasn't too awful -- it had slipped from 10K pace down to about marathon pace.  Every step just seemed to take forever.  A few other runners slogged by me at the end too.  We each mumbled something derogatory about the wind.  There were less than a 100 half marathoners and the ability levels really was across the board.  Most of the time I had someone within eyesight of me but as the race progressed -- particularly in the latter miles -- I was running solo.
Finally the end was near and while there wasn't much left.  However, with each step I got a little closer.  I was doing math in my head and at this point given my energy level, all I wanted to do was finish sub 1:55. 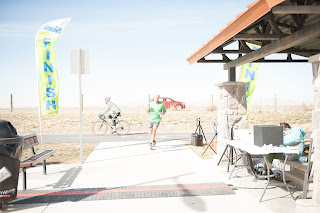 I finally made a short / sharp turn and crossed under the March Madness flags. 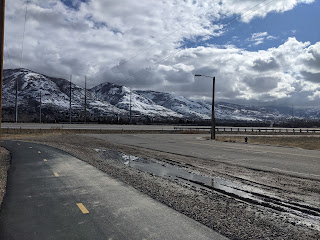 First the good: I ran a 1:53:54.  This was my best half marathon time for a non-short course (the race was 13.10 -- remember I accidentally paused my watch during the start) that I had run since 2016.  I was really excited about this.  While the last 3 - 4 miles were grueling, I had turned in a very good time. 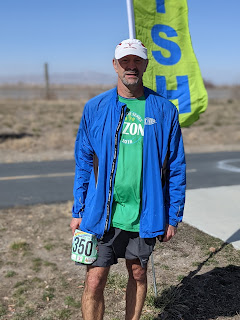 Now the bad:  Every age division -- except mine -- I would've place.  After reviewing the outcome, my age groups (50-54) was the toughest.  I would've needed another 4 minutes to win at least 3rd place.
After finishing I was totally spent.  I caught my breath and I felt just sick to my stomach.  The 10K and 5Ks were pretty much all gone and there were only a handful of runners hanging around.  I wound up making a dash to my car to get a Pepsi, which settled my stomach. 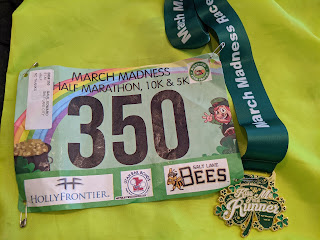 As usual, post race refreshments are better than your average race. They had fruit, milk and water but they also had pizza and cookies.  My stomach was definitely not having much of that  But I did grab a banana (which I barely could get down) and a chocolate milk for later.
Overall, for the price paid on the race, I was happy with my experience.  I enjoyed the course and the challenge and I turned in a half way decent time despite the high winds (which Garmin said were 20 miles per hour).  The mile markings lined up with my Garmin and there were 5 aid stations (I carried my own in 2 8 ounce flasks of Tailwind).
This bodes pretty good things for 2021 for me as I keep re-achieving times I previously ran half a decade ago.  After finishing and patting myself on the back, I was wondering, when is the next one?
Posted by Eddie Gaul at 1:48 PM