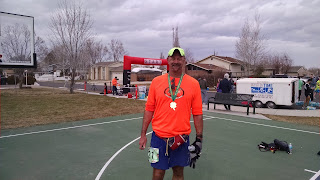 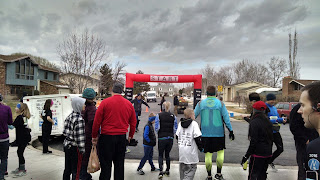 
Sometime over the winter break I got an incredible offer from the race director for the March Madness Half Marathon, which I have done before.  Basically, as an early bird and repeat customer, I could get in for about $35 (plus the usual service fee).

For a fully supported half marathon, with shirt / finisher's medals, it is a bargain.

The course isn't my favorite -- I've run on the Legacy Bike Trail up in Davis County several times.  On the plus side, it is flat and easy to navigate.  On the negative, it is simply a bike trail that hugs the Legacy freeway and while you get to look at the mountains and a stretch of field, it isn't exactly breath taking running.

That being said, I know they put on a good and accurate race and I would get more than my money's worth.  Plus it is a race. 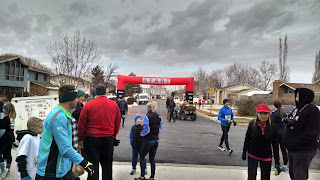 The race is put on by a fellow runner to benefit a local food bank and I've run his races before.  He does a good job and I knew the race would start at 9 AM on the dot.

I rolled in just after 8 and grabbed my shirt and a small goody bag lined with promotional stuff.  I cycled through the bathroom a time or two.

It was cold and I debated on wearing a running jacket.  I was definitely in with my shorts and paper thin gloves, but my core felt cold.  I had doubled up on running shirts -- one short sleeved and a long sleeved over it.  I opted just to go with that  -- and I am glad I did. I would've roasted had I used a running jacket.

The race started at 9 and I took off at a fairly easy pace.  I like to feel my way into a run and I wasn't sure what I had.  I figured if I could do 8:45's -- at least for the first 5 miles or so, it would set me up for a pretty decent race.  I knew this course wasn't downhill and I was running at a higher elevation, so 2 weeks ago half marathon of 1:49 wasn't going to happen.

It was fun loping along as we made our way down to the bike trail.  I was listening to other people talk and occasionally reminisced with people about last year's wind tunnel fest.

It was crowded running but I was never hampered except for maybe the first 100 yards.

As I approached the bike trail I spotted some of the speedier folk heading back from the 5K.  I think I would've been able to top 10 the race and I sort of wished I had done the 5K.  But I was feeling good.

On this course you run north and for the most part the course is flat.  There is an occasional mole hill of a hill on the trail or even a slight incline, but this is about as flat as it gets.

There was a little bit of a head wind but it didn't feel like it slowed me down.  It was NOTHING like last year, where the return 6.5 miles felt like you were behind a jet airplane.

The mile markers were more or less spot on and after the 10K runners turned around it was sort of lonely running.  I was always within site of someone and occasionally I'd come upon and we'd run for a spell.  About the only consistent runner I had to work with is the guy pushing a special needs person -- I dogged him pretty much the whole race.

I was so happy to see the turn around point.  I was feeling pretty good and I had made good on my time of 8:45 min / miles.  I was just fearing a crash and burn scenario.  I popped a gel and grabbed some water from a volunteer and headed back.

There were only a few water stops at this race.  Luckily the temperature didn't warrant more.  And I carried my own.  I probably could've gotten away with not bringing it, but I am glad I did.  It seemed to help.

The final 3 miles were a grind.  I felt myself getting fatigued and winded.  My legs felt good and I felt like I was still holding 8:45's but it seemed to take a lot more effort and at each mile marker my pace wasn't what I had been hoping for.

I got a little bit of a cheer / motivation as I made it back to the final 1.25 miles from a cheer squad.  Up until that point, there wasn't much crowd support except for the occasional non-racer runner who gave us a thumbs up or a passing cyclist.

The final mile was really tough.  There were a few rolling hills and I kept trying to push myself a bit harder.  I managed to pass (and get passed) by a few runners but I was sort of worried about a guy who I had passed midway through the race who now had just passed me.  He looked to be my age (I think he was older) but he had pulled quite a ways ahead of me.

My pace had slipped off more than I had hoped and I started to do the math as to when I should finish.  I was hoping to go sub 1:55 and I just missed that mark. 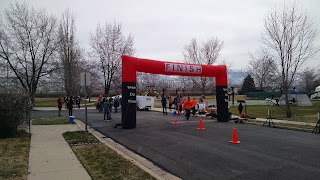 
I crossed the finish line and the first thing I had to do was use the restroom.  I had debated going during the race but I didn't want to lose time and it probably wasn't all that urgent.

After using the facilities I grabbed some water and socialized a bit.  Post race food was pizza, fruit, packaged granola snacks and my favorite Fat Boy ice cream sandwiches.  It was too cold for them though.

I headed back to the finish line and checked the results and the race director alerted me I had won my age division.  Sweet. 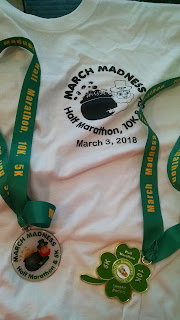 Overall, I felt like I had run pretty well.  I had hoped for better. I did run faster than last year but a far cry from the 1:51 I ran in 2016.  I really need to get my average mile per pace down but I am still feeling out what my fitness level is for 2018.

This race was worth running, especially at the price I paid.
Posted by Eddie Gaul at 3:21 PM