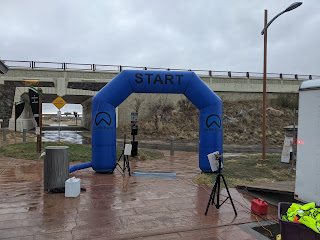 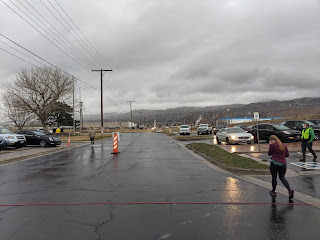 At some point this past winter I got a nice offer to sign up for the Lucky 13 race put on by OnHillEvents.  I have done it for a few years and it is a nice race in early March.
Normally this race is held at Gardner Village in West Jordan.  However, due to some construction on the bike trail, it was moved to North Salt Lake and run on the Legacy Bike Trail.  I've done a lot of racing at this bike trail and while it isn't the most glamorous place to run. On the flip side, it is flat and I know the course.
I opted for the 10K race.  It is a good distance but doesn't really beat myself up too badly.  I usually have a slew of half marathon races in the spring.  Also, the weather can be super iffy in northern Utah in March.  This year, I was counting my lucky stars when Saturday's weather rolled around: windy, rainy and chilly. 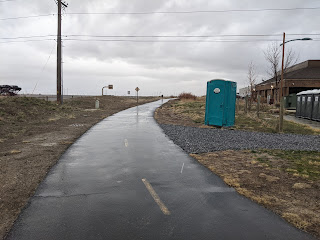 I rolled into the race around 8:10 AM for the 9 AM start.  There was kind of a line up to collect one's bib / shirt but fortunately it moved fairly quickly.  We thankfully had shelter under a building's porch to protect us from the drizzling rain.  As I stood there waiting in line, I was trying to figure out what to wear.  My plan was to go out in shorts and one shirt -- maybe two.
By the time I made it back to my car to make my final preparations -- as if on queue -- it started to rain -- hard.  The weather forecasters had said it would pick up at 9 AM and sure enough it did.  Suddenly my decision on clothing changed.
I wound up going with shorts, 2 t-shirts and a windbreaker.  I also had a ballcap on and thin gloves.  It was a pretty good choice actually.  Anything more would've been too much and less -- I would've froze.
There was another wait before the start of the race.  With Covid-19 restrictions in place, it was a staggered start.  And the half marathon started first.  There were about a 100 racers and they had to be queued up and let off in about 10 - 20 second increments. 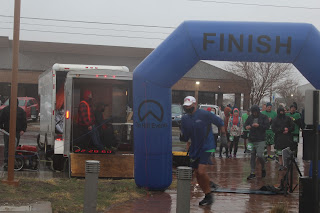 During this time I tried to keep warm and dry and did a few warm-ups.  It was definitely the worst warm-up I've ever done.  My main motivation was to stay as dry as possible.
It wasn't until about 9:20 that I actually was able to run.  And off I went.  I really just wanted to be done as soon as possible.  I believe there was a real threat for hypothermia.  I know I've run through a lot worse but there was an absolute bit of nervousness when I left.  I was even toying with just doing the 5K.
The first mile I felt extremely stiff.  My Achilles was sore, my hamstring was tight.  Crap, this was going to be an awful race.  The wind wasn't too bad but my hands were already cold and my legs were cherry red.  I felt very sorry for the half marathoners who in all likelihood going to be out there for 2 hours (or more). 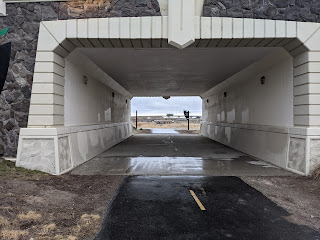 I kept telling myself, just get it done.  I passed the first mile marker in a respectable 8:24.  I was being hit with a headwind but it wasn't too terrible.  My goal was to hit low 8 minute miles for the first three and hammer it with what I had left in the final 3.
As I headed north along the paved bike trail, I passed a few of the slower half marathoners.  Once in a while a speedy 10K runner would be heading back or passed me, but it was a pretty lonely going for me.  I had the din of the traffic on the legacy freeway and parks and residential areas on my right.
Finally, I hit the turn around and received the cheers and way-to-goes from the 2nd aid station crew (bless the volunteers at this race).  It was under a pedestrian bridge and I ran through the tunnel, touched the turn around sign and headed back.
What a difference!  Suddenly the howling wind was at my back and every step brought me a little closer back towards the finish line.
With the wind at my back, I hit the proverbial accelerator.  I was logging some decent splits and suddenly the notion of hitting one of 2021's goals of breaking 50 minutes became a bit of a reality. 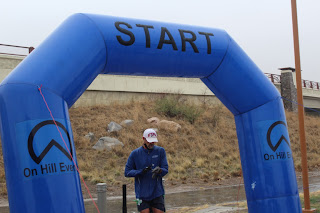 I got a bit of a boost upon hitting the 5K race's turn-around point.  Some of the later starters were still running and working on chasing them down and passing them give me some motivation to dig deep.  I didn't really have anyone chasing me and the one guy who was ahead of me had left me in the dust.
I was definitely running out of endurance by mile 5.  When I reviewed my splits after the race I had figured mile 5 was going to be my worst, but it wound up being my best. I think the smell of a sub 50 minute 10K pushed me a little more.
I was ecstatic to cross the finish line in 49:42. 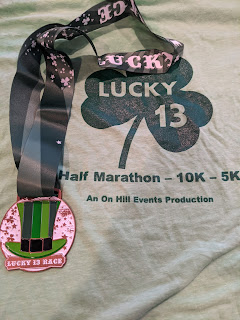 Okay, so my time was sub 50 minutes -- for this race.  I figured the course was going to come up a bit short as the turn around came around at the 3.06 mark.  I had hoped my Garmin might be in error and that magically it would get a bit closer to the official 6.2 mark, but it held true: 6:12.  Given that I needed to run another .08 of a mile, I am guessing my time was closer to the 50:30 mark.
I hadn't taken any hydration for the race -- you simply didn't need it. Although I had carried a tiny 8 ounce flask of water with me just in case.
There wasn't too many people to celebrate with when I finished.  It was still raining and those that had finished the 5K had already left and there were only a handful of people who had done the 10K.  I knew I had about 10 minutes before I was going to start getting chilled.
Post race refreshments included a pre-bagged fruit (oranges and a granola bar).  There was also water / Powerade at the finish.  I wound up socializing for a bit before running back to my car and heading home.
Overall, I was happy with my experience.  I want to say I paid about $25 for the race.  I got a nice medal and shirt.  I just wish the race had been a full 10K.
This was also a good test of "I can do tough things".  The weather was less than pleasant and there was always the thought I was going to wind up with hypothermia.  But I've certainly run through worse and I made it out the other side with more confidence.
This was also a confidence booster in that the weather wasn't exactly the most conducive for a fast time, but I turned one none the less.  This is an indication to me that my training is coming along nicely.  I am hoping good things continue in 2021.
Posted by Eddie Gaul at 3:54 PM