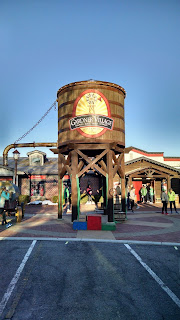 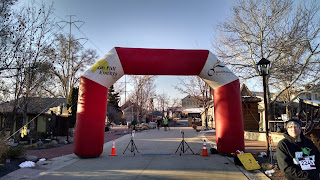 Around the start of the year I got sent a blast e-mail which offered some pretty good discounts on various OnHillEvents for the year of 2019.  I had done the race last year and it is just a short 2 mile drive from my house.  So it was a pretty easy decision to do this one.

Last year, though, I had dug myself into a bit of a racing hole.  I had done WAY too many half marathons.  I think in the early spring I did about 6 or 7 half marathons in the span of 7 weeks.  Mid way through I was feeling beat up and this year I didn't want to have a repeat.

So I've dialed it back a bit this year and opted for the 10KM this -- and boy I am glad I did.  I definitely don't feel as run down as I did last year. 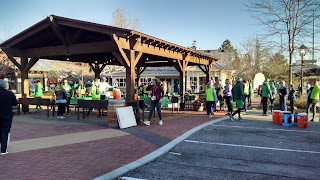 I had picked up my bib the night before, so the whole process of getting ready for the race was as easy as it gets.  I got there just shy of 8:30 for the 9 AM start.  I circled around and took some photos, used the rest room (funny how I have to go even after a 2 minute drive from my house) and then did some drills to warm up.

It was kind of chilly and I opted to run in shorts, 2 shirts, and throw away gloves.  I also ran with sunglasses and a hat.  It was perfect, although I got a little warm mid way through the race despite the upper 30's / lower 40's running weather.

The race started a little late, but no biggie.  Joseph the race director had said he had a big turnout and he wasn't kidding.  Last year, the number of runners were kind of thin.  This year, he had a good contingent of them.

I inched my way to the front but not too close.  From previous race experiences on this course, the race gets pretty jammed at the start but opens up soon enough.  It all depends upon how many newcomers there are that sort of start up at the front.

I hadn't done much of a warm-up before the race so I sort of eased my way into the first mile.  In some ways I was glad to be hemmed in because it forced me to ease into the race.

The race is held on the Jordan River Bike trail, which is my stomping ground for training.  However, I live about 2 miles north of the starting line and I almost run north when I run on it.  This race goes south and the bike trail is largely flat with no significant hills.  There are plenty of twists and turns but generally speaking -- you run south for 3.1(-ish) miles and then turn around.

I was pleasantly surprised to see the first mile go by fast.  I felt like I was running hard but not that hard.  I was worried I had started too fast and that the last 3 miles would be a crash and burn scenario.  Having just run a half marathon a week before, I knew that I had plenty of endurance. 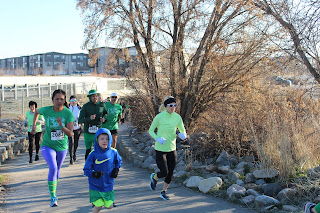 The 10KM is such a nice distance.  It is a mix of hard running (speed) while still you need endurance to finish.  I was again surprised (and happy) to hit mile 2 even faster than mile 1.  I could feel a little bit of lactic acid building up in me but overall I felt good.  I was wearing my Saucony Fasttwich shoes and I actually felt light on my feet.  And, I was still working with other runners.

Just before the halfway point of any race -- particularly one with an out-and-back profile, I desperately can't wait to hit the turn around point.  It is a mental relief as well as I know how much more I have to go. 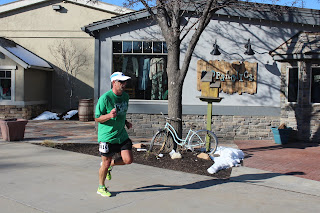 I figured I was going to top 10 the race.  I didn't see anyone in my age group and there were only a handful of other runners ahead of me.  The leader of the race was well ahead, but I had a few people to work off of in front of me and a few chasing me from behind. 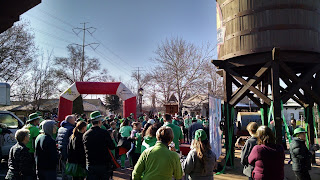 I was hurting by the time I got to mile 4 but still felt good.  I looked behind me and there were a few runners behind me but not lots.  So I wasn't too worried about losing my age group lock.  At 4.5 I went through the first aid station again and I was still holding a pretty solid pace.

The last mile did eventually catch up with me.  I had two runners trailing me and I was doing my best to hold them off.  One was a woman and the other turned out to be much younger man.  I think they were using me as a pacer and in the last .2 of a mile they both gunned by me and I had nothing left to give.

Also the final mile involves a lot of zig-zagging and tight turns.  There is also a very short but painful hill as you get into the parking lot of Gardner Village -- the boutique shopping area that hosts the race.

I tried catching them but they clearly had another gear in them.

I crossed the line in 50:32 (on my Garmin).  I talked to another runner who said he ran 6.10 miles.  The race was most likely short, so I am guessing on an officially measured course, I'd be just shy of 52 minutes. 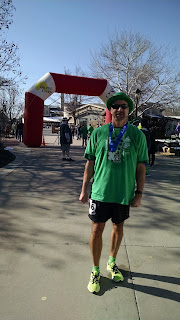 I was pretty happy with my time.  I ran well and with the exception of the last mile, my splits were more less very consistent.  Usually I start out WAY too fast and then shuffle through the finish line.  With all my endurance training, it is nice to step down to a shorter distance. 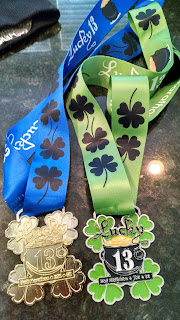 I grabbed my finisher's medal and I wasn't too surprised to see I had won the 45 - 49 age division (last year the half marathon in my age division was super stacked).

I wound up socializing with several runners after the race.  We were all commenting about how nice the weather was.  I kind of wish the weather remained this nice throughout the year.  It was absolutely perfect for a fast run.

The post race refreshments included sports drink, candy, oranges, sandwiches, bananas and of course Fat Boy Ice Creams.  I wound up loading up on those... they taste absolutely heavenly after a race.

I don't remember exactly what I paid for the race, but since I was early it was pretty cheap.  I definitely got my money's worth.  The shirt was nicely designed although it was another cotton / polyester blend.  I am not sure what to make of them as I definitely prefer the 100% polyester shirts for training.  I'll wear it, but probably not for racing.

While the course isn't unique or new, it is a fast one and I enjoy it.  There is something comforting about knowing just about every twist and turn on a course.

I am just pretty happy with the results and I hope this streak continues.
Posted by Eddie Gaul at 2:00 PM