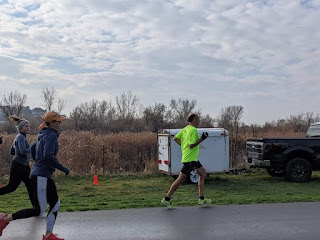 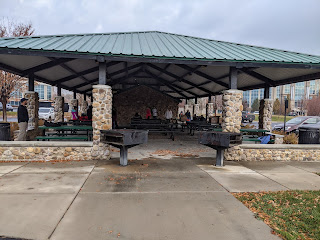 With the race season coming to a close, I am trying to jam as many races as I can into the final weeks.  I know come late December / January, I'll be jonesing for a race.
So I decided that to run the inaugural South Jordan (SoJo) Turkey 5K / 10K.  Last year this race was held, but it was virtual, due to Covid.
Eagle eyed readers should have already noticed that this race's course is identical to the one I ran in August for the Rivalry Run.  So this time I had a bit of a heads up on the what the course was going to be like and how to pace myself. 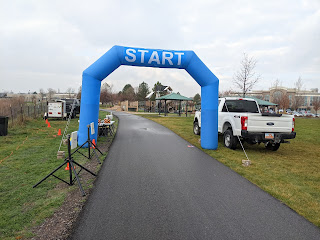 Like the Rivalry Run, this race started fairly late: 10 AM.  This time it was welcomed.  With the cooler temperatures, it was nice to sleep in a little longer and be able to toe the line at a reasonable hour.
The race started promptly at 10 AM and off we went -- about 50 of us -- south on the Jordan River Parkway.  It is a paved trail that is popular with runners, cyclists and dog walkers.
I didn't have many goals for this race other than to race faster than I did last time.  I had some vague visions of what my time was 3 months ago, but to be honest I just wanted to really go hard and see what I had.  Of late, my times haven't been the greatest (probably over racing) but I was using this as a solid workout and to be honest, the weather was very ideal.
I had surveyed the competition and usually a race this small and produced by the South Jordan people don't usually have age group awards.  But still, I wanted to race competitively.
The first mile I went out pretty fast.  I was trying to keep up with as many people as I could.  I wanted to hold back, but the adrenaline of the start had me going and feeling good.  When my Garmin buzzed and I saw the 7:45 I had mixed emotions. The split was pretty good but I knew I was going to pay for it.
I proceeded southward on the trail and on the east side of the Jordan River.  I was tailing the first place woman and had a guy breathing down my neck but after that -- no one in front of me and no one behind me.  In all honesty, I wanted the guy behind me to either fade out of the picture or just pass me.  I didn't like the pressure of having him back there. 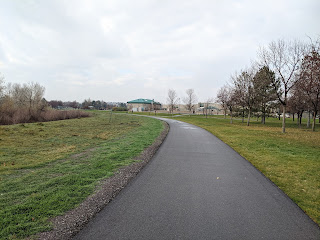 Still, it forced me to keep a nice pace and I dialed it back ever so slightly.  I hit the mile 2 marker just as we turned west and crossed over a bridge to begin our winding journey back to the starting line.
At this point, also, I started getting backed up with phlegm.  I had carried a small flask in my pocket and took a tiny sip.  I am not sure what causes it (allergies) but it can become depilating at times.  I had to slow to clear my throat to avoid getting sick.  Mile 2 arrived with a pace of just over 8 minutes.  Exactly where I wanted to be.
The next mile I really felt like I was slowing down.  I was hurting pretty badly and the guy who was chasing me gained on me and then passed me.  He obviously was taking it easy for the first 3 miles or so and then pushing the final 3.
Mile 3 saw me slow down.  But I was re-invigorated a bit as I rejoined some of the 5K runners.  I felt like I was flying and it was nice to see friends who encouraged me to push hard and run strong.
Mile 3 also sees "the hill".  I remembered it from the last time I ran the course and it is a hill of just pure "up".  I focused on maintaining good form and not panicking.  Just put one foot in front of the other, and get up the hill.  I've done a fair amount of hill training this year and knowing I could get up it and with proper form enabled me to get it done.  In fact, I finished that mile significantly faster than I had 3 months ago.
Fortunately after that hill you get to run down the backside of it on your way back.  So that kept me motivated and I found another gear as I soared into mile 4.  Just 2 more miles to go.
Mile 4 is mostly downhill.  You've done the hard work and now you get to run through a neighborhood and back down the dreaded hill.  I felt fast as once again I encountered the 5K runners.  Some of them were running this stretch but I had found another gear.  I hit the start of mile 5 back on target for a pace.
After making my way through a new housing construction zone I was finally redirected back to the bike trail and just had less than a mile to go.
I had remembered when we crossed under a bridge at the outset that I had about .66 miles to go to hit the starting line.  It was a sweet relief as I passed by the 2nd aid station and saw the bridge.  I started to do the math as to whether I could under 50 minutes.  It seemed realistic but I felt like my form was collapsing, but I still had some strength left.  Just push!
I was weaving my way around some of the 5K walkers and while my pace was in the low 8 minute / mile zone, I felt like I was running much slower.  When I could hear the din from the finish line I knew it was going to be close.  I gave it everything I had in the closing .2 of a mile. 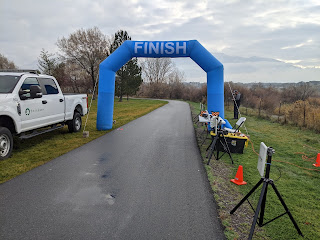 I crossed under the finish line on my Garmin in 49:46 -- cracking 50 minutes again.  My official time was 49:41 though.  Not sure why the discrepancy.
I did finish about 10 seconds (officially) faster than I did 3 months ago.  I'll take any sort of improvement, although it seems a bit trivial.  There was more wind today (a bit from the north) but August's race was definitely warmer.
I walked off the ensuing nausea and chatted with some of the other 5K / 10K finishers.
The race was a bargain race -- about $25 to register.  I did get a shirt and a pretty cool medal.  I am told there "may" be awards for the top 2 finishers in each age group.  As of right now, that could apply to me. 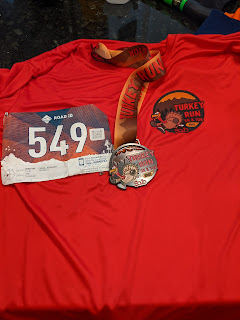 Overall, I was happy with my experience.  It was a low key / low frills race.  The course was interesting and it was good to see a lot of people I may not see until 2022.  There was simply water at the finish line -- it would've been nice to have bananas or something.  The medal and shirt were nicely done though.
My Garmin did measure the course short again, but given it's tendency to do that, I suspect, it is close to a legitimate 10K.
If this race fit into my schedule, I'd be interested in running it again.
Posted by Eddie Gaul at 6:59 PM