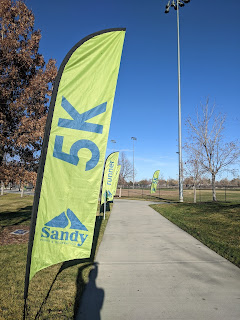 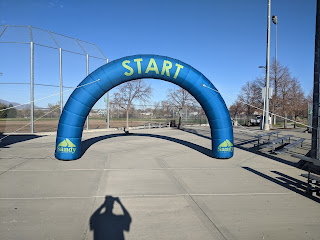 It's been a while since I've run the Sandy City Turkey Trot 5K.  In fact, the last time I ran this was race back in 2014.
For the past 7 years, I've tried to get this race back on my schedule. Unfortunately, every year this race weekend conflicted with the Las Vegas Marathon race.  So I was never able to do this race.
With the Las Vegas races being moved to February, this left this weekend open for yet another 5K and finally I could return to the Sandy City Turkey Trot.
Sandy City is where I used to work when I first moved to the Salt Lake area in 2012.  Their recreation center puts on a lot of races and I was a frequent customer.  They are affordable, yet competitive and well executed.  So I was pretty excited to be able to get this race in and see if I could improve on my 2014 -- or even my 2013 time. 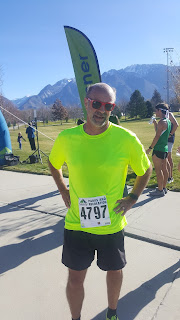 The race started at 10 AM -- so that gave me plenty of time to get ready in the morning.  I could eat a substantial breakfast and prepare a great deal more than I normally would prior to a 5K.
I arrived at the race site with about 50 minutes to spare and quickly grabbed my shirt and bib.  It was a perfect day -- a hint of chill in the air, yet sunny and warm.  There wasn't much more than a breeze as well.  I had plenty of time to do a warm-up and I ran about a mile around the circumference of Lone Peak Park, which is where the race was headquartered. 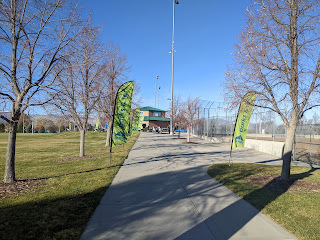 I felt pretty good and was ready to go at 10 AM.
The race's course was different than previous years -- yet at the same time "the same".  The race made a loop around the eastern end of the park before exiting off into a mature subdivision.  As I ran through the streets of Sandy, I could recall 7 years ago running this exact same route.
I had studied the course beforehand and knew that the first mile and a quarter were mostly downhill.  And I knew I'd hit a really nice split.  On the flipside, I knew coming back it'd be a slow grind to get back to the starting line.  There are no "major" hills on the course, but it would be a long, slow climb.
So I held back a little and ran a 7:46 for the first mile.  Off to a good but controlled start despite a fairly cramped start (imagine a hundred runners, jockeying for place on a wide sidewalk)
Eventually we made it to a bike trail. Again, I remembered this stretch too but instead of heading north to a baseball field, we headed south.  New territory!
The bike trail ran along a canal and the freeway.  It was pleasant but you could hear the din of the cars around you.  My competitors had thinned out and I was running with another group of runners. My goal was to work off of them and try to over take them.  I knew this course wasn't likely to lead to a personal best record, yet I still wanted to make a good showing. I also suspected (correctly) that the competition for an age group award was iffy at best.
At this point it was so sunny I couldn't really read my watch.  I glanced down though when my watched beeped at mile 2 and saw an 8:16.  What???!?!?  I was certainly running faster than that.  My watch though does record short, so if I ran a mile, I likely had run slightly more.  Perhaps I wasn't that far off.
We were heading back and the course was flat through that 2nd mile and I actually really enjoyed it.  I just kept working on my turnover and occasionally putting in a burst of speed to gain ground on the people around me, which again had thinned out drastically.  I wound up catching the small lead pack in front of me.  Next up were some younger folks....
The first half of the final mile was the grind back to the park that I wasn't looking forward to.  I still had a lot of fight left in me, but I couldn't muster up much turnover at this point. I was hurting and I was fighting back the urge to walk a bit or get sick.  I focused on putting more ground on people behind me, but I felt like I was running through quicksand.
What helped, though, was that I remembered running down this stretch not much more than 10 minutes ago.  So I knew that it wasn't that bad and that once I got done with the incline, I would have a final stretch of about half a mile to crush it to the finish.
Finally, I turned a corner and I could see the entrance to the park.  I looked at my watch and I definitely had more than half a mile to go.  And yet, I could see the finish line and hear the music.  So close, yet so far away.  I had to completely run around the finish line in a wide arc to account for the full distance.  It was heartbreaking and I could hear the names of the leaders crossing the finish line well ahead of me.
Occasionally I'd look behind me and no one was closing in on me and I was making ground on the young adult (half my age) in front of me.  He was hurting and it motivated me to push a little harder as I looped the north end of the park.  Again, I felt like I was running much faster than the 8:15 (or pace) I was running.
Finally, the finish line came into view and I knew I had a 100 yards or so and I gave it all I got and cruised through the finish line, passing the young male in front of me in the process.  Finish! 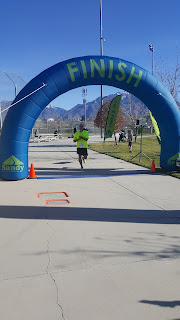 I was a bit distraught to see a time of 24:40.  I really had hopes of 24:15 or so.  This course was challenging though.
You may also notice that my watch reported a distance of 3.01 miles.  I checked on Strava.com and many other runners got 3.09 to 3.11.  Clearly my watch continues to shortchange me.
There were no finisher medals on this one -- just a pie + medal for age group awards (1st through 3rd).  Unfortunately I placed 4th.  I would've need to take at least another minute off my time to contend for an award.  I think that is what happened in 2014 as well.
Post race refreshments were water and granola bars.  I got a cute heavy cotton t-shirt that is suitable for Thanksgiving.  I like the design but the material is cotton, so it likely won't see many runs. I could see wearing it bumming around the house in the winter. 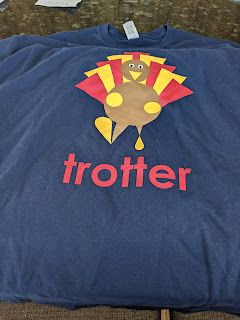 All in all, I liked the course, organization and race. It was a low frills race and for $25 I got what I paid for.  My time wasn't the greatest on this one and I honestly felt like I had run faster and better than I had in a while.  I definitely had something left in the tank for the final stretch, although the split didn't really account for it.
I had fun though and it was great seeing friends I haven't seen in a while, plus it got me in the festive mood for the approaching holiday season.  Perhaps I'll have better luck next year.
Posted by Eddie Gaul at 6:50 PM