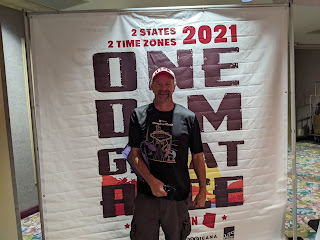 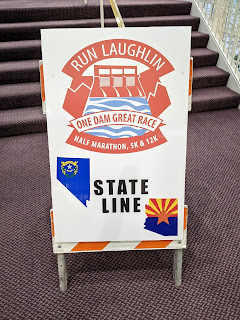 So way back in 2019 after completing my first Laughlin Half Marathon I decided to go for the double race medal and getting the Lake Havasu Half Marathon done.  If I ran both of them, I'd get an extra medal.  Having never been to Lake Havasu Arizona, it sounds like a cool plan.  The race was scheduled for April and it would be something new.
Unfortunately Covid-19 came along and postponed the race.  Early this year (in 2021) the race was scheduled to happen but I did not feel comfortable traveling.  With kind consideration from the race director, I was able to transfer the race entry to 2021's Laughlin Half Marathon. 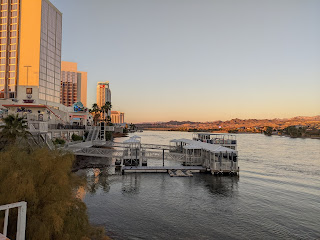 When I ran the race in 2019, I had a great time and it was a challenging and unique course.  While the course is challenging, I wanted to do better on it and I put the memory of it in my back pocket to do again some day.  So I had absolutely no qualms about doing it again.  What's not to like: running, gambling, good food, desert scenery and all around fun! 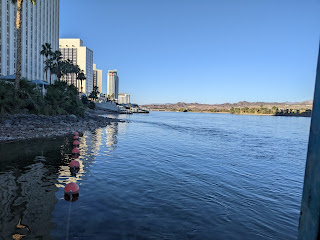 The race started at 7 AM on Saturday 12/4/2021.  I found myself searching for the shuttle bus that would take me to the race site a little before 6 AM.  Memory served me correctly -- and the bus was in the same spot as it was last year.  I had picked up my bib at the packet pickup the day before, so I was pretty much set to run.
The bus ride was fairly short.  It took us about 10 minutes to reach the high school where the race would start.  We had access to the high school gymnasium to stay warm in.  On the plus side, we had clean bathrooms as well.  The time went by quickly and there were plenty of people to socialize with.
The race started promptly at 7 AM.  We assembled out in the front parking lot, got some basic instructions and off we went.
The first mile of the race involves basically running a long lap around the school.  You wend your way around the school's parking lot before going down a service drive.  Whereupon  you do a lap around the high school's track and then returning back up the service drive.
I hit the first mile in a pretty quick low 8 minute mile.  A bit too fast but on target given that the first mile was somewhat downhill.  I did take note that the next 2.75 miles were going to be challenging; I definitely remembered that from last year. 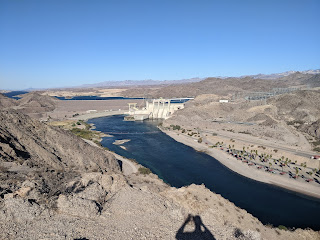 Those miles definitely are cause for pause.  It isn't a crazy ascent but you are definitely climbing.  Fortunately, you are still fresh into the race, and you've had a bit of a warmup.  I knew that the uphill would be short-lived and that I would get to the top and have some insanely fast miles coming back down.
I worked on maintaining my form, being patient and trusting that if I could just power through these miles that the sweet downhill reward would be just ahead.  I worked with some other runners so that helped.
I finally reached the summit of the main road at mile 3.77 -- just like I did 2 years ago.  I did realize that I had to use the restroom and at the top of the hill there was a porta pottie.  I had been flirting with whether I needed to go or not (#1) and I knew if I didn't go, I wouldn't be able to concentrate.  Fortunately the portable was empty and I took 30 seconds off my race to conduct my business.
Concerning to me at this point was how out of breath I was. Had I gone out too hard?  The brief respite was actually pretty good for me.
I jumped out of the bathroom and I was immediately greeted with a beloved site: nothing but downhill for as far as the eye could see.  I took off down with this stretch with renewed vigor.  I had gotten through the worst part and the rest of the race would be comparatively easier. 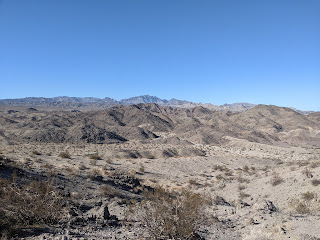 The next 3 miles or so were a delight.  I was hitting 5K paces with ease.  My breathing was easy and I was just coasting along.  If only the entire race was like this.
I did about 1.5 miles along the main "highway" into town followed by a left hand turn into the Davis Dam / Pyramid Canyon area.  This is probably the prettiest stretches.  You can see the casino-lined town of Laughlin below you and after turning into the park's entrance you can see Davis Dam as a tiny white dot below. 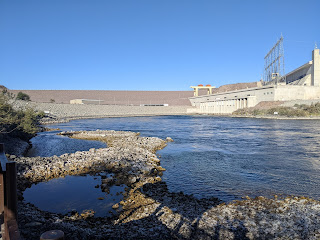 The race became "real" upon reaching the bottom of the service drive.  I had forgotten that upon arriving to the bottom there were a few hills.  I thought there was maybe one, but I forgot the first one was quite long and steep and it was followed by a grind above the dam and up into Arizona, where the turn around lie.
My legs suddenly felt like Jell-O.  And while that mile wasn't too bad - pace-wise, every inch of it hurt.  My once easy pace was suddenly very hard.  And it didn't end upon reaching the top of the service drive to the top of the dam -- it continued.  I had conveniently forgot about this part.
My pace grew worse and I was dying to ask the front runners who were flying by me on the downhill how much further I needed to run.  Eventually, though, it did come and I turned around the coned off turn-around (and I was suddenly in Mountain Time and in the state of Arizona)  Finally I could recoup some of my time on the downhill back into Davis Dam Park.
Unfortunately I was gassed.  I was in the marathon shuffle mode where every step seemed to take a lot of energy.  I was doing well, all things considered but my race at that point might as well have been over.
By the time I was down with the returning downhills and making my loop around the city park at the base of the dam, I was drained.  I kept willing myself forward and overall -- my miles splits at this point where still somewhat okay -- they came very hard-earned.
The next 2 miles are along the river walk bike trail.  It is actually really pretty.  To your right is a wall of dirt hills and to the left is the Colorado River.  You are surrounded by desert vegetation along the paved path  There are some stretches of hills -- particularly as you get near the edge of town.  And here I recorded one of my worst miles.  I just had nothing left.  I just wanted to be done. 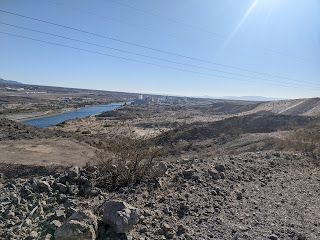 The final mile is kind of cool -- you drop into north end of town and run along the bike trail before finally doing your last mile or so on the "Strip".  You are surrounded by casinos, a few spectators and businesses.  It isn't as cool as running at night along the Las Vegas Strip -- but it is a unique experience.
You do have one lane entirely to yourself and at this point I was intermixed with some of the 5K and 12K runners.  But it was a bit of a depressing feeling -- as I was being passed by many other half marathon runners who still had gas in the tank.
Finally the finish line drew near (the race is certified so I knew that I was going to have to run 13.10 miles) and I crossed under the finish line with a deep sigh of relief. 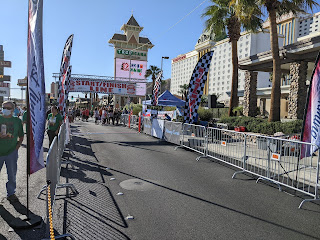 I really had visions of running this in 1:53 - 1:55.  While my training hasn't really been endurance-based, I felt I had done enough long runs leading into the race (each weekend doing 9 or 10 miles).  Also I was coming from 4500 feet elevation to about 500.
So I think not having a lot of endurance in me caused me to run out of gas at mile 8 or 9.  On the plus side, I did beat my time from 2 years by 2 minutes (more if you exclude the bathroom break).  Yet, I was still disappointed.  I was shooting for a strong end-of-year half marathon and I should've adjusted my expectations upon the course. 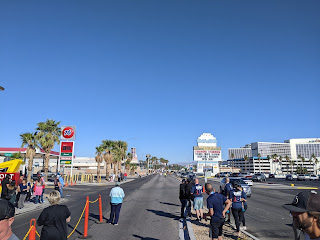 I grabbed some water (weird -- it was in a can of Liquid Death -- apparently they make water) and a banana and grabbed my medal.  The weather was absolutely perfect with only a bit of wind and I enjoyed just sitting on a retaining wall and watching runners cross the finish line.  The after glow of a race that was run hard (but not necessarily well) was just a joy. 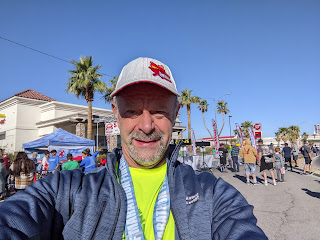 After I recovered a bit, I ventured to my room -- I was staying at the finish line hotel -- the Tropicana of Laughlin, so it was a quick 10 minute shuffle and back.  I grabbed my camera, took some photos of the finish line and settled into a post-race rest mode.  I sat in the sunlight and enjoyed the weather and just people watched. 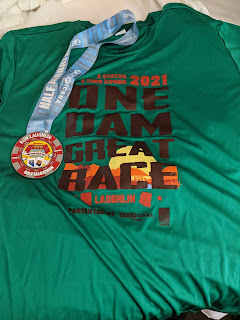 Post race refreshments included chips, cookies, fruit, water and beer.  They actually had a really nice spread of food and there was plenty to go around.
Overall the race was well worth it. I had registered ahead of time, so the price was reasonable, the medal was huge and the t-shirt was nicely designed.  I really enjoyed the course -- although it is challenging.  The views and the chance to run near the dam are unique and make this race travel-worthy (most of the runners were from California)
There is definitely more downhill then uphill (at least according to my Garmin) but you really need to be prepared for the hills scattered throughout the course.
I really enjoyed the race and I would love to do this one again.  The organization was spot on and the mile markers were pretty accurate.  There was plenty of support and ultimately it was a pretty cheap getaway (all things considered), especially after taking advantage of the race discounts for the hotel.  It is a bit of a drive from Salt Lake City (7.5 hours) so it is a commitment.
Posted by Eddie Gaul at 7:36 PM