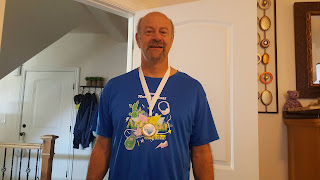 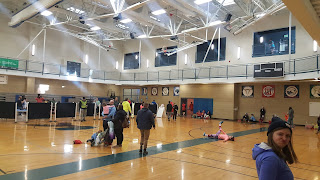 Pretty much every year around Valentine's Day, I head on up to Bountiful for the Sweethearts 5K race.  It is a very affordable race put on by the South Davis Recreation Center, located in the heart of Bountiful.

I always register for this race right about the time I do their Turkey Trot race, since it winds up being just over $15 for a fully supported race, with finisher's medal, a decent shot at an age group prize, and a nice post race social area.  Plus, they always have nicely designed tech shirts that I make use of. 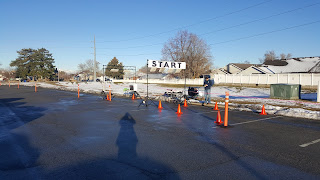 I showed up about 45 minutes before the race and found the parking lot a little icy.  We had had freezing weather the few days prior so I felt my shoes sliding around a bit in the shady areas.  Would this race have difficult footing?  I would certainly hope not (hint, footing was not a factor).

I grabbed my shirt very quickly, used the bathroom, and laced up for the race.  Despite the freezing temperatures, the air temperature for this race wasn't too bad.  While my Garmin reports that it was in the mid 30's; I want to think it was closer to 40.

I opted to go with thin gloves (which I pocketed half way through the race), a long-sleeved shirt, sun glasses, hat, and shorts.  I was perfectly fine. 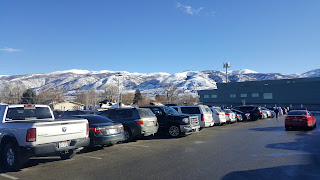 The race started promptly at 9 AM and we were off running down one of Bountiful's main drags.  If you want to see photos of the course you can browse on previous editions of the race but suffice to say, it is a residential run, which the final mile and a half or so, a slow, uphill grind to the finisher's line behind the recreation center.

I haven't done much speed work and unfortunately I am a good 3 pounds heavier than last time I did this course (and I've done this 5K course at least a dozen times by now).  I didn't have high hopes during my warm-up.  Also, I've been battling a hamstring injury (again) that threatens to become angry at times.  It stopped me dead for about a week or two a few weeks ago and I think I've finally turned the corner on it.

The first mile, I felt good -- as I should -- as I spend down the race course.  If only I could hold this pace.

I was running with the usual suspects so I knew this pace was good.  And to be honest, I was a bit shocked to see a 7:54 pop-up on my Garmin after mile 1.  Not bad, but a far far cry from the 7:15's I had run on the first mile years before.

Miles 1 through 2 things get serious.  After about a quarter of a mile you are no longer given the benefit of the downhill and in fact, you start have to pay back what you borrowed in the first mile.  My pace and form crumbled.  I still felt pretty good though but people were passing me and I knew I was going to pay a price for going out too fast.

I don't think I even bothered to look at my watch when it beeped when I hit mile 2.  I had glanced at it a few times and I knew I was running somewhere in the low to mid 8's.  I looked at my overall time and hoped that I could get into the low 25's if I just picked up the pace in the final mile.

Unfortunately the final mile is where the hill really kicks in.  It isn't a massive, back breaking up hill, but at mile 2 of a 5K you should be hurting and this hill doesn't help.

I was slightly miffed when I rounded the corner and started to see the finish line and saw an evil "9" pop up on my Garmin.  9 minute mile?!??!? Nuts.

The course usually winds up short (I've had other people say they came in at 3.10), but every year I run it with a distance of 3:07 or so.  I must run the tangents really well. 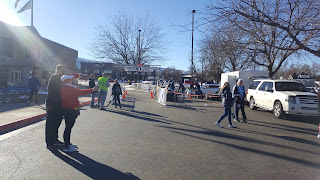 I crossed the finish line with a time of 25:55. Sure beats a 26 but this race wasn't what I was hoping for as far as my overall time.  I use this race as a barometer for my general fitness and it is clear I need more speed work and have to drop a bit of weight.  However, I am battling the hamstring pull, so the amount of hard running I can do is limiting and I have to keep the mileage on the lower side to avoid aggravating it.

The race has some nice post race food -- gourmet bundt cake cupcakes (which were insanely delicious) and your typical post race spread of water and fruit.

This year, the race timer had it so you can quickly get your race, and unfortunately I placed 5th in my age group, so no prize this year. So it was a quick social visit with many of my friends before hitting the road.

The finisher's medal is a generic one.  With the coronavirus going on in China, the manufacturer couldn't meet the order of the "nicer" medals, so apparently they are going to be mailed out at a later point.  This one will suffice, but usually this race has some nice medals.

Once again, I have work to do if I am going to get serious about shaving some seconds off my time.  Yes, I had some challenges for this race: 1) first race of the year (more or less) 2) injury (runner's knee and hamstring issue) and it was a tiny bit windy / icy.  That being said, the injury really sidelined my training, I think, which lead me to a flat race.

Suffice to say, I'll have other opportunities to run better and once I am 100%, I can trust my body and nail the times I want.  But this one, for all intents and purposes, was kind of a speed workout to see where I was with my training. 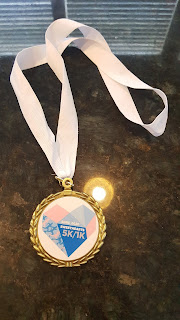