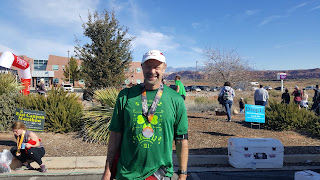 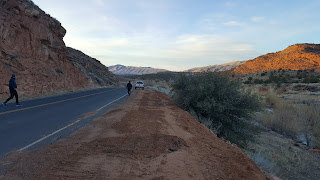 Last year, the Sun Marathon had come up and it was yet another race in the St George area.  This time of year, there are quite a few races that entice us northerners to come on down and enjoy the cleaner air and warmer temperatures.

Sometime during Thanksgiving, OnHillEvents sends out an email blast with their forthcoming 2020 races at pretty ridiculous prices.  Since I had missed this year's edition of the St George Half Marathon (in January) I decided to pony up for this race.  It was a 3rd annual race and a course I hadn't done before.  Also word on the street was that it was a good race.

So I decided to do it.  A new race, a chance to get warm, and a chance to test my fitness.  I usually run well in warmer temperatures and this race boasted a mostly downhill course.  Definitely a way to get my confidence up.

So I took off from work a little early on Valentine's Day and made the 3.5 hour trip to Cedar City where I'd spend the night.  Prices in St George were ridiculous so I opted to stay about an hour away the race start and save myself $70.  It would definitely be an early morning though. 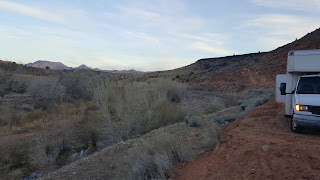 The race's pick-up zone was at Gubler Park in Santa Clara.  It is a multi-use park primarily serving the community for baseball games and such.  I was one of the first ones there and managed to snag a decent parking spot and get my bib in short order.  I managed to kill about 30 minutes before loading a coach bus and heading to the starting line.

I was a little nervous for this race.  I have been plagued with some hamstring issues that get aggravated the longer I go.  They also don't like uphills.  I've also been battling some runner's knee.

To make matters worse, my training hasn't really been really solid for a half marathon.  Maybe 25 - 35 miles per week with a long run of about 9 miles. 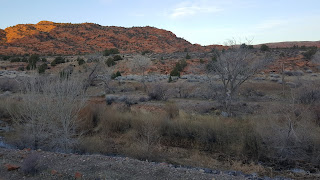 We had about an hour to kill at the race start.  It went quickly as I made small talk with fellow runners.  They had a good number of runners from all over the place -- even some distant travelers.

The race started promptly at 8:30 and we were off.

I had sort of gotten a good idea of what I was in for on the bus road to the top.  I was relieved to note that the race was downhill. It wasn't crazy downhill, but enough to give you a 15 - 20 second boost per mile.

So I wasn't too surprised to see my early miles turn in some 8:30 times.  I wasn't even trying that hard and just letting my legs flow forward and gravity take me down.

The course was warm when we were in the sun but primarily at the start we were in the shade, which made it chilly.  But after about half a mile, I reached a very comfortable running temperature.

The course first miles of the course is the best part.  There isn't a lot of traffic, there are some cows on the side of the road and you are following the Santa Clara River.  You are also surrounded by desert, red rock hills and desert scrub.  I was really enjoying this part of the course and the miles just melted away.

After a little over 5 miles you head on out to Old Highway 91.  At this point, an hour into the race, traffic is starting to get a little more pronounced.  Most drivers are headed out of town and you are running towards them on a shoulder, that at times was barely wide enough for a bike.  I didn't have any problems with drivers getting close to me but I was constantly aware of them.

We passed by the Shivwits Reservation and had a few up hill sections at this point to contend with.  I smelled the beginning of the end with the hills and wondered if my endurance was going to hold.  Also, we had some down hill running, but at this point, it was primarily flat.  This part of course had some nice view of the Red Rock Conservation Area in the distance, but up close, there wasn't a lot to look at.

The air was definitely warmer and I was regretting wearing two shirts instead of one (I also had a hat, shorts and gloves, which I quickly pocketed).

There was plenty of hydration stops of water and Powerade.  I carried my own -- just in case.  I like to be able to take a drink willy-nilly during a half and I think having a little extra hydration and Tailwind in me helped.

Just shy of mile 10 -- with 5K to go we hung a hard left into a residential section.  It was a very slow grind up hill.  The occasional house resident in the area cheered us on, but it was sort of lonely running.  A few marathoners, who had had a 90 minute head start, passed me.  It is always humbling to be passed by a full marathoner when you are just running the half.

We were getting closer to the Red Rock area and despite the hill and not a lot of desert scenery, I enjoyed running in the residential area.

There were only about 150 half marathoners in the race so most of the race I was running solo.  Again, occasionally a full marathoner passed me but for the most part, the nearest person was either a 100 yards behind me or ahead of me.

Finally at about mile 11 we made another turn and we were in the home stretch.  The 10 KM and 5 KM runners had started and they were headed out.  It was a little bit of a boost for me to get some encouragement from them... just as I was fading. 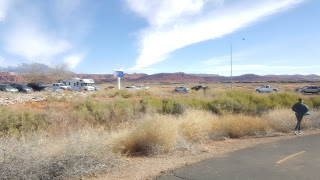 The last mile was more downhill.  I was a little concerned though as some of the race markers disappeared here.  Was I going the right way?  I had no idea where I was and part of me was holding back out of fear that I had missed a turn.  My watch kept getting closer to 13 miles and there was no sign or sound of the finish.

I got word from someone walking their dog that I was almost there and that gave me encouragement I was going the right way.  Finally, I passed the last group of houses before seeing the park's entrance the finish line to my right.  Thank goodness!

I pushed it with whatever I had left and crossed the finish line in under 2 hours. 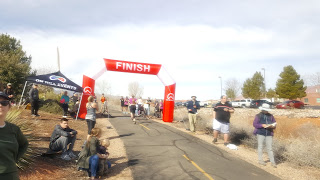 Post race food consisted of orange, bananas, peanut butter and bread, Powerade, Water, and of course ice cream sandwiches.  I always bring extra food for myself, but I didn't need any.

I was surprised at how good I felt after the race.  My hamstrings had given me a few concerns about what I was asking them to do on substandard training but they had held up magnificently.  My runners knee, while having a wrap around my knee, also was feeling fantastic.

I was able to wake off the post race wooziness I feel.  In fact, I hardly felt any at all.  The weather was absolutely perfect -- maybe upper 50's by the time I finished and I loved sitting on the rocks just watching runners come in while working on my tan. 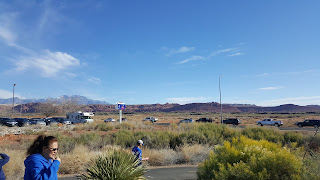 Turns out I won 2nd in my age group -- so it was double medal day.  Granted the race was small, but getting some recognition for a race is always a bonus. 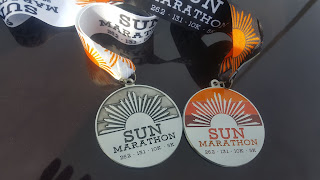 My performance -- was actually outstanding all things considered.  I felt better than expected at the end.  The course measured long (about 13:26 - 13:30), according to people's watches (after my informal poll).  I believe I ran about .15 mile extra, which might be anywhere from 90 to 120 seconds of additional running.  So my time was really rock solid all things considered.

Overall, I pretty much have great things to say about this race.  I tend to run well in St George (with the lower elevation and cleaner air a major factor) and the weather was absolutely perfect.  I was "glowing" with personal satisfaction on this one and was excited about the course, running something new, and turning in a fairly decent time with fairly decent splits (considering the hills).

I would definitely do this one again and I am penciling it in for 2021.
Posted by Eddie Gaul at 7:28 PM