Valentine's Day is a bit of a tradition for me.  Since moving to Utah, I've always done the South Davis Recreation Center's 5K up in Bountiful Utah.  This race is cheap (particularly if you sign up early) and fairly close. They also give an epic swag bag / experience that includes a finisher's medal.

I had signed up around Thanksgiving Day, so the price for this race was less than $20.  How often can you get a timed 5K race, t-shirt, goody bag and post race refreshments for under $20?


I really had high goals for this race.  First off, I've run this course many times, so I know it well.  They use the same course for the Thanksgiving Day races, so I think I've run it close to 7 times by now.

The race starts off fast with a first mile that is mostly downhill.  It isn't a crazy downhill but surely downhill enough to make you go out fast.  And I did... I really wanted to push the first mile hard.  There was a mild headwind and I managed to tuck in behind a woman who was running low 7 minute miles as well.

After the second turn you have a long stretch of road that culminates with a climb to the finish.  This is where the going gets tough and my legs started to feel heavy.

I felt like I was in contention for an age group award and I really wanted to hit mid 23's, so I really pushed as hard as I could here.

I really felt good here and managed to really turn it on in the last quarter mile.

I was about 7 seconds slower than last year, but at least I was slightly ahead of Thanksgiving's finish. So I have mixed feelings about my performance.  On the plus side, my Garmin did say I ran my fastest mile ever,

The turnout seemed less than last year but the swag bag was packed full of goodies.  This year's t-shirt was also something I can wear -- the last few years have been sort of effeminate.  I also got a nice finisher's medal too... again all for $20.

It took forever to get the results and once I realized I wasn't in contention for an age group award I took off.  I think most other people got frustrated too and left.  I did stick around making small talk with a few runners though and loaded up on a some snacks.

I'll definitely do this race again, but I really hope to move from 4th place to 3rd (or better).  The last few years I've been skunked.  Oh well. 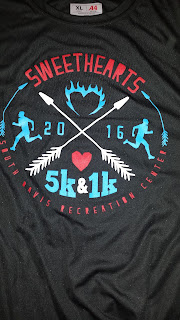