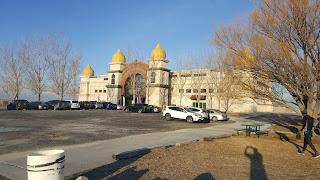 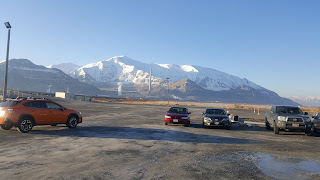 Well, another Saturday, another race.

The pickings are usually pretty slim for February races.  The weather is fairly unpredictable in Utah.  You could have perfect weather or a chance snow storm come in.

This year, we had pleasant weather and it was completely dry.  So I decided to get in a bit of a speed workout by doing the Salt Lake Track Club's 15K race.  This is a 100% certified course that is flat and also doubles (I think) as the State Championship race for the 15K distance.

To say there were a few fast runners would be an understatement (the winning time was in the 48 range).

I wasn't expecting much from myself on this race other than to see how far off I was from when I ran this in 2015, which seems like another lifetime ago, and to get a bit of faster running in.  The 15K is actually a pretty nice distance.  It is far enough where it tests your endurance, but doesn't wear you down like a half marathon does.

So I sort of went after this race as if I was running a half marathon, but I could be a little more aggressive with the pacing. 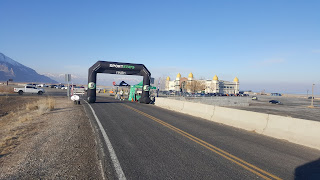 The race started at 9 AM and I rolled in just after 8 AM.  The race was held at the SaltAir Pavilion, which is a venerable site in Utah, having survived floods.  It is an older building and judging from the interior, some of the original stuff probably remains.

Today is serves as an event venue and a concert hall.  It is on the shore of the Salt Lake (about a half mile removed).  They have clean toilets and a place to stay warm, which was a nice bonus. 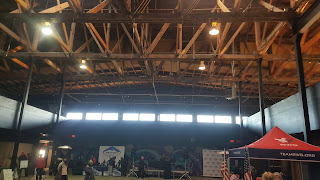 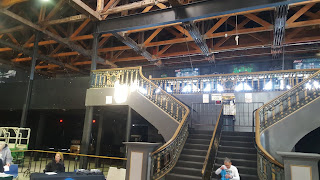 I was able to quickly grab my bib and shirt and I laced up and sat in my car for about 15 minutes before beginning about a mile warm-up.  My hamstring hadn't been bothering me and I felt good, although last week's half marathon was still weighing on me a bit.

The weather was cool -- perfect for running actually.  I had originally come wearing two shirts, but I dropped done to one.  I was in shorts and throw away gloves (which I pocketed after about a mile).  I also had sunglasses, as the early morning sunrise was a bit bright. 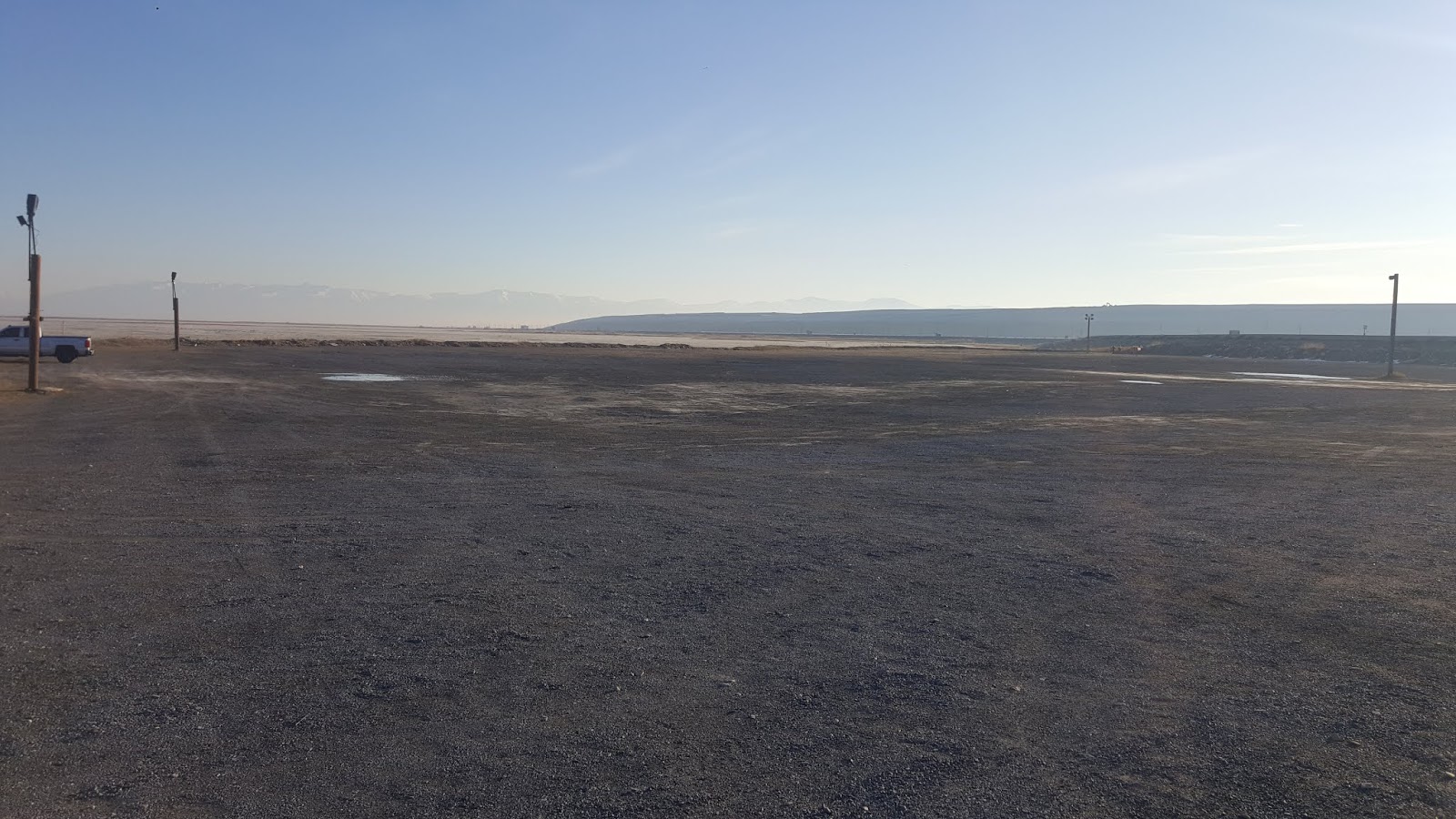 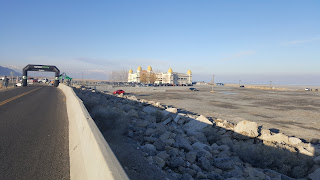 The race started on time and I was off and running.  I knew I didn't have much of a chance to win anything.  I hadn't done the 5K nor the 10K in the series but I was still trying to do myself proud.  I had looked my results from 2015 and I had hit a 7:45 mile for the first mile.  My training is nowhere near that but I was a bit surprised at hitting an 8:30 for the first mile.

I felt good but I knew that was a little fast.  I tried to solace myself that this was only a "15K" and even if I went out a little too fast I wouldn't pay too dearly.

The first 3 miles I hit at super even splits.  I felt really good, although I was breathing a little harder than I should've.  There were about 450 runners and I was never by myself for the first half of the race.  Also, little did I know, that the first half had a slight downhill.  The surface of the earth is very flat in that area and while there was only about 25 feet of elevation gain / loss in the race, the first half definitely felt fast.

At about mile 3.5 I knew I had gone out too fast.  I intentionally slowed down a bit as I hit the first water stop and swished a bit of cold water in my mouth.  My competitive spirit was still strong though I only slowed down a whopping 6 seconds.  By the time my Garmin chirped that I had reached 4 miles, I was begging to reach the turn around.

The course is run on a frontage road that hugs the I-80 freeway.  Occasionally a semi would drive by honking its horn.  To my left was the Great Salt Lake, not a very impressive site given how far away it was as well as Antelope Island.  It isn't exactly an exotic race course, but again, it was closed to traffic and I could concentrate on running.

I almost wanted to hit my knees when I reached the turn around point.  Thank Goodness!

When I turned around, though, there was a bit of wind (not much) and the course on the way back just looked uphill.  Again, this course measures fairly flat but it was like a whole new course.  Who put this hill here and why didn't I get to run down it?  Even a runner next to commented on it. 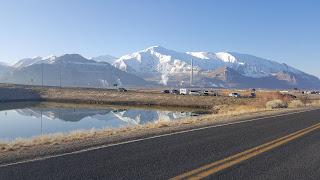 Finally at mile 7.5 or so I could see the SaltAir in the distance.  Why did it seem so far away?  I could also see the freeway signs saying the exit to the SaltAir was in a mile.  So close yet so far away.

Fortunately, the number of other runners around me had dwindled.  I wasn't really picking off to many other runners and in contrast, only a few shambled by me.  I had gotten some positive vibes in the middle of the race from runners who were still heading out (kind of makes you feel like an elite runner) but at this point it was fairly lonely running.

Finally, the finish line came into view and according to my Garmin, it measured 100% spot on.  Awesome! 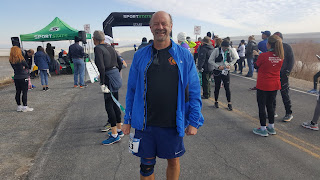 The post race area had water and Gatorade.  It wasn't a terribly hot day so I didn't need a lot, but it felt good to actually swallow hydration rather than rinse my mouth out (which I have a tendency to do during a race).  I actually felt really good at the end.

My hamstring had bothered me a time or two, but for the most part I felt rock solid.  It certainly wasn't a death march and despite going out pretty fast I more or less hit the average time I was shooting for (about 8:45).

I sauntered back to my car and put on some warmer clothes and hit the SaltAir for coffee and bananas.  They had a variety of other snacks but it was typical post race stuff. 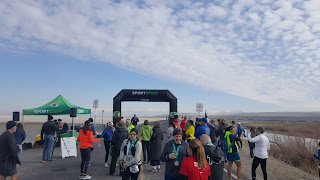 They only had a finisher's medal if you had done the entire series (5K / 10K / 15K).  They actually looked like really nice medals but alas, this was a one and done race for me.

This race hearkened back to my days when I was really competitive.  I am no longer fast -- not even a little bit.  It was inspiring to see people of all ages in the front ranks pouring it on.  There were guys my age in the top 10 as well as a sprinkling of whippersnappers.

I wasn't here for any medal or age group award.  I was simply here to test myself on an honest course and at an interesting distance (I think in my running career this is only the 2nd 15K I've ever raced).

I paid about $40 for the race.  I got a well organized event, a polyester / cotton blend shirt and a decent experience for most of my Saturday morning.  If this race fits into my schedule again and I feel like competing, if it is only against myself, you'll find me here again. 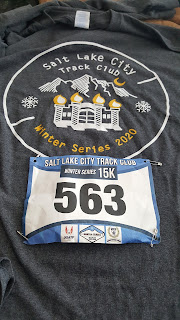