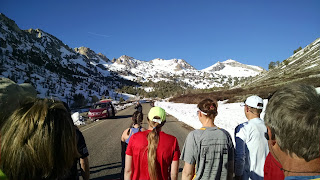 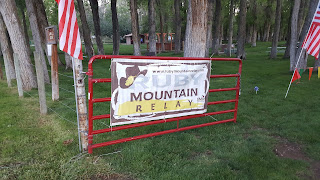 Well if you are a regular reader of my blog, you know I have a special affinity towards Lamoille Canyon.  It is a little known canyon just south of Elko.  Locals know it as a great place to hike and fish but outside of Elko County, it gets little attention.

Lamoille Canyon is just a beautiful area though and I look for just about any excuse to go there -- either for a hike or for running.

So it didn't take much thought for me to jump into this year's edition of the Lamoille Canyon Half Marathon.  It is one of my favorite yearly events and it is also one of my favorite races of the year.  Just getting out of town for a long week, running in my favorite canyon and the whole experience just resonates with me. 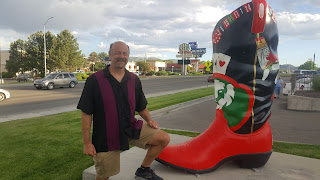 I took off on Friday afternoon after excusing myself at work at the half way point.  I was on the road by noon and made the hour and 40 minute drive to Wendover. We did a bit of gambling / sports / buffet eating betting before heading into Elko, another 90 minutes from Wendover.  It is a super easy drive and the speed limits are fast.  I thoroughly enjoy the drive and it never gets old for me.

Packet pickup was at the Elko bike shop and I hit rush though and it was a solid 20 minutes to get my bib / shirt and swag bag.  It seemed like everyone decided that around 4 PM was a great time to get their bib.

We did a bit more gambling and relaxing.  We grabbed dinner at JR's Restaurant -- across the street from the Red Lion.  No more buffets before a race for me.

I slept like crap despite a nice room.  I've never slept well before this race -- and it's not because of the hotel -- it's just being in an unfamiliar area.  If I got 4 hours of sleep, I was lucky. 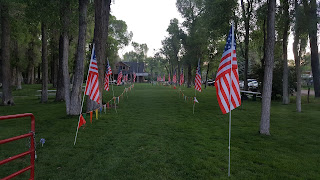 I was up at 4:15 AM and out the door by 4:45.  I made the 30 minute drive in no time at all and grabbed a great parking spot near the finish line.  Was one of the first to cycle through the bathrooms before jumping on a bus. 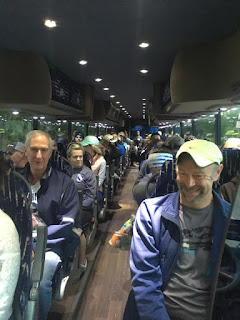 I know when taking a bus ride to a race it is super smart to get in the front.  My bladder was overactive and thank goodness I was first off the bus.  There were only about a hundred of us up there but 3 bathrooms.... 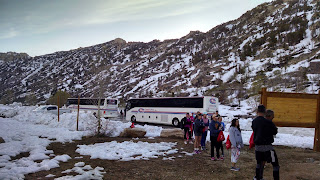 After using the restroom, I did some socializing and did my best to stay warm.  As you can see from the photos there was a decent amount of snow up there and the temperature was in the mid 30's.   As a veteran of the race, I knew what to expect and had the appropriate attire.

The race started promptly at 7. 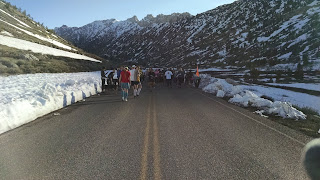 The first quarter mile is just awful.  You starting off running to the circle at Road's End (elevation around 8800 feet) before turning around.  I always tell myself to take it easy and not stress out about it but running at the elevation and just starting your engine, so to speak, is just plain cruel.

Luckily the pain is short lived and I can get my breath again as the downhill starts.  I had dressed down to shorts / t-shirt and cheap gloves.  I was perfectly fine with this.  And soon enough, from being chilled, I was working up a good lather. 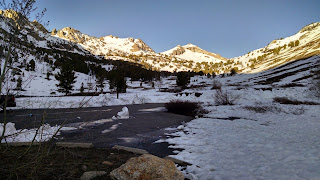 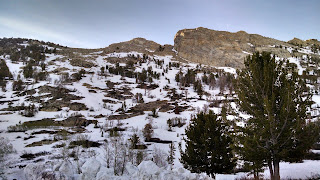 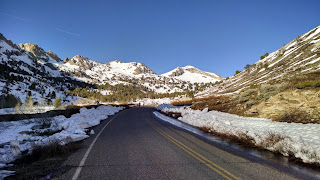 The first few miles flew by.  In a blink of an eye I had blasted out a speedy 5K at just under 10K pace.  Gravity was assisting me as the course progressively gets more downhill.  Although, I felt like my breathing was a bit labored and I summed it up to the elevation.  I simply felt like I wasn't getting enough oxygen. 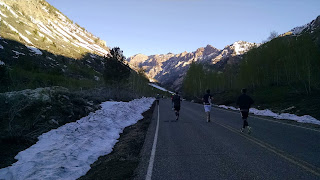 For the most part, I was within talking distance of someone during the early miles.  As the race went along though, the runners got more dispersed.  But it was nice to have company for the first 6 miles or so.

The canyon had caught fire last year and it was sobering to see all the damage.  The upper areas hadn't really been affected by the fire, but as we descended down the canyon on the service road, I was witness to the damage the fire had caused. 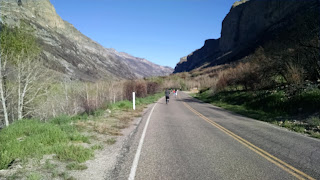 The snow gave way to burned out trees and scrub.  The grass was coming up and some of the trees might survive, but many were charred and leafless.  It was really sad seeing my favorite canyon in somewhat of a ruin.  On the plus side, the rivers and waterfalls were plainly in sight and it was comforting to hear the water splash or roar over the rocks.

I started to come out of my funk midway through the race.  As I descended, I got more oxygen in me and I started to hydrate more at water stops and using some of the hydration I brought for myself.  I toyed with taking in a gel, but really didn't feel the need for it (in hindsight I probably should've used one). 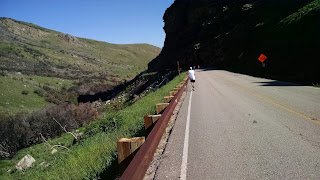 Part of me wanted to keep running in the canyon but part of me was looking forward to getting out.  When I could finally see Elko in the distance, I knew the race's end was coming and to be honest after the quad pounding of nearly 3000 feet of elevation decline, I wanted to give them a break.

Unfortunately, exiting the canyon means that there are rolling hills coming, including some hills that might be easy peasy on fresh legs, but would spell disaster on dead legs. 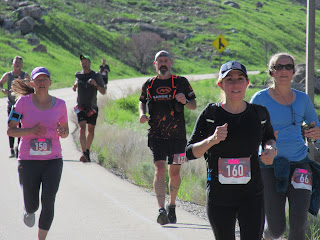 I knew this was coming and braced myself for it.  I actually felt like I did okay and while my time wasn't too bad on those first couple of hills, it was demoralizing because I was so used to coasting and not having to work on maintaining any sort of pace (this race is hard to have any consistent pace due to its nature).

I wondered how the marathoners -- who started an hour before us -- were fairing on the rolling hills after running all that downhill.  I really don't think my legs would've tolerated that.

The final mile is always the toughest.  There is just nothing left.  My quads were shattered, I was thirsty and the sun was beating down on me.  It wasn't a terribly hot day but the sun just felt intense.  Couple that with the fact that you have to run now and not just coast, it makes the final mile hard.

I kept looking behind me to see if anyone was coming as I fell into a death march pace.  I willed myself to go faster but my legs just felt like lead.  My ego was at play here and I tried but I couldn't muster up anything.  I kept looking at my Garmin.... please....

Finally I could see the flags for the entry in Lamoille Grove Park and to be honest, I almost walked the last .1 of a mile.  I was just "done" but with pictures being taken and again with me ego, I pushed and let the crowds bring me in. 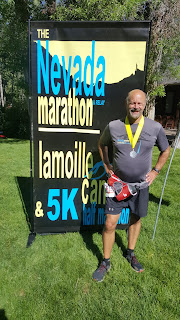 I wasn't sure how I did compared to last year.  I seem to recall finishing around 1:53 and figure my 1:54 wasn't too awful.  I later learned I had finished in 1:50.  Talk about a bruise to the old running ego.

Definitely my slowest race.  Given though that I put on a bit of weight during my running hiatus due to a hamstring pull and the fact that I am just starting to get back to regular training, it wasn't too surprising with my time. 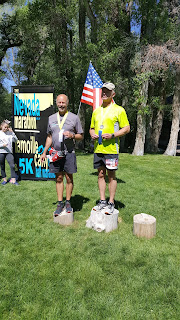 Post race refreshments are always good.  They had chocolate milk, ice cream, fruit, sports drink, and chips.  My stomach was touchy so I kept to the basics.  They also had pancakes.

I know quite a few people in Elko, so it was great catching up and talking to folks who had run the marathon.  Again, I have no idea how anyone has 13 more miles in their legs after blasting down that canyon.  I am not sure there was another mile or two left in me at the end of that race. 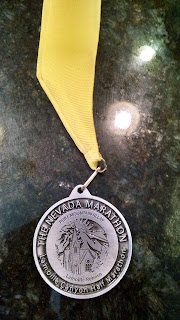 I wound up nabbing 3rd in my age group.  Luckily, the guy who normally comes in first (and I get second) was a no show, otherwise I would've been out of the money (so to speak).

The medal is cool.  It isn't anything fancy but it is definitely personalized for the race and commemorates the rebirth of the canyon after the fire of 2018.  They also had a cool Lamoille Canyon t-shirt.

I paid about $60 for the race.  This is the going rate for a half marathon these days and considering all that I received I was satisfied with what I was charged.

Course support was good.  They had gels, fruits, water and sports drink at about every 2 miles starting at mile 3 (the premiums came later in the race).  The mile markers were off and got more off the further the race went.  Fortunately, overall, the race is accurate in overall distance.  Bag drop was also stress free as well.

My race result isn't what I had hoped for.  It makes me sad / angry as this course is fast.  But considering, I've been eeking out about 2 hour half marathons the past 6 months, my result is not surprising.

I will likely do this race again next year.  It just a joy to get out of town and experience the canyon.  I probably would've hung out at the post race awards / festivities a bit longer, but hotel check out time was coming so once awards were over, I headed out.