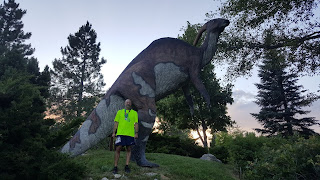 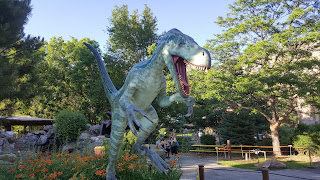 
I am not sure what possessed me to once again do two races in one day, but I suppose I like the nature of the challenge.  I had signed up for this race sort of on a whim:  the medal was cool, it was at a park I've wanted to check out for a while, and it was something new.  The morning race was done mostly because it was close to my house and cheap.

I didn't quite think it through though on account that after finishing the first race, I sort of hung around the house all day waiting for the second.  I didn't want to wear myself, so going for a hike or spending an inordinate amount of time on my feet was out of the question.

So I was more or less climbing the walls the moment I finished my first race in the morning. 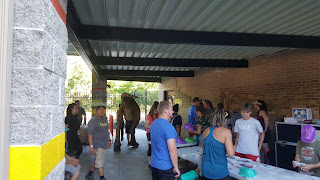 I left Salt Lake around 6 PM to make it to Ogden (an hour away) and arrived at the George S. Eccles Dinosaur Park.  This park is mostly known for having a ton of life-like dinosaur monuments in a family-style atmosphere.  The appeal of the race is you get to run the grounds of the park as well as the Ogden bike trail (which also follows a bit of the Ogden Marathon route).

This race is also a night race, starting at 8 PM.  The summer temperatures are finally reaching normal here and it was a balmy 90 degrees when we got there.  By the time the race started it was 85F and the sun was just starting to sink. 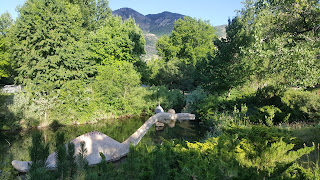 Getting there early gave me some time to explore the park and take some pictures of the dinosaurs.

The race was definitely a winner for OnHillEvents.com.  They had a ton of runners and many children in attendance.  It would be tough running though as the was started on a small bike trail.  Fortunately, there weren't that many super serious runners there and it primarily appealed to families. 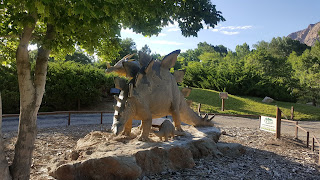 So when the race started at 8 PM, it was a bit of a mess getting going.  Fortunately, I had managed to sneak my way up into the front area (and it was chip timed) and I got off to a decent start.

Almost right away my hamstring tightened up.  Big time.  It freaking hurt and it was similar to the injury I had in April that sidelined me for nearly 2 months.  By 200 yards I was wondering if I should bail on the race and not risk hurting it even more. 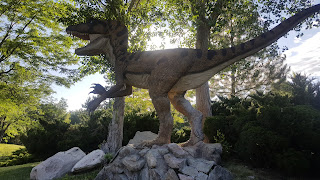 I decided to hang in there and I dropped my pace considerably.  I had warmed up before the race, but for the last month or so, my hamstring has reminded me that it isn't quite 100%.

After a brief run in the park we were deposited to the bike trail where we ran west for a while.  It was surprisingly hilly -- nothing killer, but definitely not flat.  My hamstring had dwindled down to a low roar and I'll be honest, I was still pretty beat from the morning's 5K.  I was just tired and I wasn't too surprised to see the first mile come in over 8 minutes. 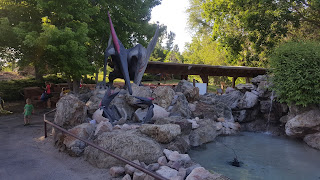 After mile 1 we did a loop and started coming back towards the park.  It was fun seeing the people I had left behind and getting encouragement from the runners / walkers.  Once I reached the park's gates again, I passed by it to continue the next out and back section.

I was working with a few people here, mostly younger folks, but it was lonesome running.  I accepted the fact that my hamstring was questionable with every step but I held on.  I didn't see a lot of people behind me and the front runners definitely weren't in my age group, so I held back a little more. 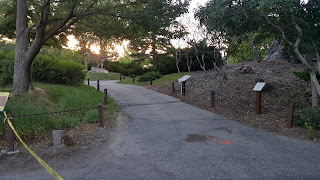 The stretch back to the park had a nice tail wind and I started to pick up the pace a bit after the 2nd mile.  I was a little worried about how I'd find my way around the park's grounds since I was more or less running solo.  No one was behind me and the next person in front of me was quite a ways away.

Fortunately, the race organized had roped off areas you weren't supposed to run in and had put spray chalk arrows.  I had zero problems finding my way around the park or knowing where to go.

I couldn't really get to full speed, however, in the park.  There were a ton of turns and the lighting had gone down a bit.  I kept looking at my watch and I only had about half a mile to go when all of the sudden the finish line appeared. 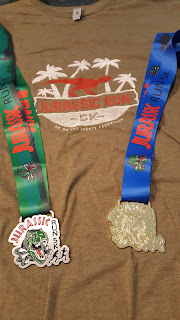 
My hamstring was tight but not super painful when I crossed.  It hadn't gotten any worse after the initial shock of not being happy with me.

I was pretty shot though, after my second race.  I started checking in with other people and they too found the race was short.

The race director commented on it that he had measured the course and that there were several turns in the park's tight confines that may throw one's GPS off.  Given my time, I suspect that 2.73 was a bit short and the race was likely in the 2.9 race.  Hard to say without mapping it on MapMyRun.Com.

The medals were beautiful.  To be honest, it was about half the reason why I signed up for the race.  I managed to snag first place in my age group. 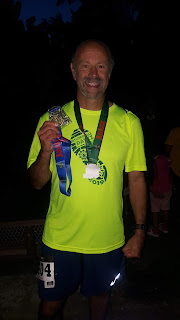 Post race refreshments included Fat Boy ice cream sandwiches and sports drink.  I had brought my own beverage so I didn't really grab that many.

Course markings were great and I really had a good time.  It was nice to see a lot of friends, both new and old at the race and it was also awesome seeing families having a good time together. 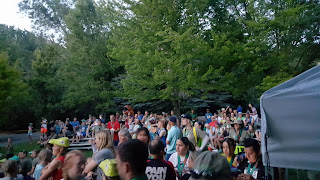 The price of the race, for me, was over $45.  Kind of expensive for a 5K but I registered fairly late in the game and I paid for an upgraded shirt.  I loved the finisher's medal was heavy duty and I loved seeing the park.  The grounds were truly awesome and I wish I had had more time to read the informational placards.

My suspicion is the race is short.  I was only running at about 80% and my time was quite a bit better than the morning's run.
Posted by Eddie Gaul at 12:38 PM