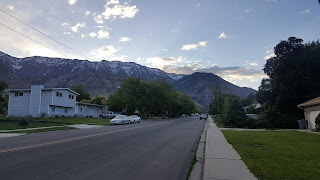 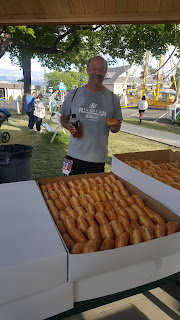 It's been a while since I've stepped into the Guns and Hoses 5K in Pleasant Grove Utah.  In fact, when I signed up, I thought I had been there, maybe in 2015 or so, but it turns out it has been since 2013!

The race weekend was a little light for me.  There was a super expensive half marathon, which seemed to have the biggest draw and there were a handful of 5Ks around town.  But I found this one to be the cheapest and a good way to test my 5K speed. 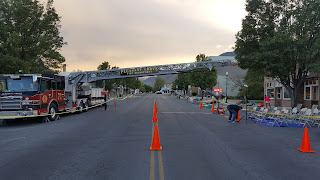 I got there in about 30 minutes and I think I was one of the first at the race start.  I was wondering if I had driven there on the wrong weekend because there were so few people.  I pretty much sauntered up to the race check-in area and got my shirt and bib.

I warmed up with about an easy mile of running.  The race was held in the downtown area that was definitely older.  I spotted a few historical buildings and really old houses along my warm-up. 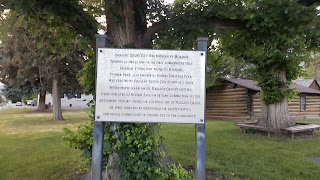 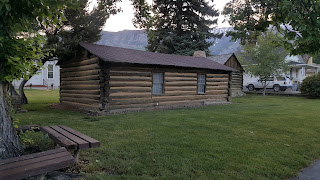 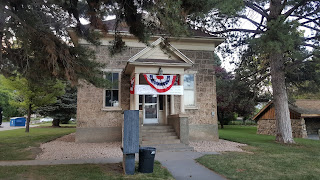 It was at this point that I forgot my Garmin.  It rattled me a bit.  I just felt like I was forgotten something.  In fact, instinctively throughout the race and my warm-up I was feeling for my Garmin.  I thought about downloading an app for my phone, but my phone is actually quite large these days and I really didn't want to be bogged down holding a phone.

I wasn't feeling too spry and was worried that this was going to be a sub-par race for.  Last time I didn't wear my Garmin I totally misjudged my pace.

The race started a few moments late, but no big deal.  It starts off in the middle of downtown and there wasn't much fanfare.  Just a huge gunshot or explosion and off you went.

The race starts with a gentle uphill.  The air seemed a bit thinner as well.  I live at 4300 feet of elevation, in Pleasant Grove it is 4600.  Probably mostly mental though.

I got off to a good start.  Again, I had no idea what pace I was running, I just knew that I wanted to go as strong as I could and was running by 100% feel.

I was in my Saucony Fasttwich shoes, which made me feel light of food.  Any tiredness / sluggishness I was feeling at the start vanished.  It always does when the race gun goes off.

There were no mile markers on the course but I had vague relocations on where the course ran from last time.  I remember the cemetery and some of the residential areas.  It is sort of amazing that I haven't stepped foot in the town for nearly 6 years and how much I do remember. 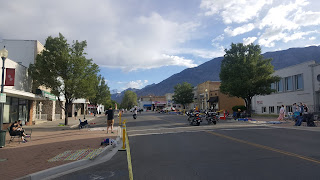 The initial uphill start of the race didn't deter me and I was able to get aggressive on some of the downhills and yet maintain a decent pace (I think) on the uphills.

The weather was absolutely perfect for running.  It was cool and about 55 degrees.  The sun wasn't intense (yet) and my legs actually felt really good.  By now, I have a pretty decent sense of distance and I was generally correct on how much longer I had to run.

At the half way point, I felt like I had reached the summit of the town.  And since this was a looped course, I figured I was going to get some downhill.  Sure enough what I felt was the final mile was mostly downhill.  It wasn't crazy fast, but it was a gradual downhill and I took advantage of it.

I still had no idea what I was running.  The few people that had passed me weren't wearing watches and there were absolutely no mile markers or timers on the course.

I noticed that the streets were rapidly approaching 100 South.  That is the nice thing about Utah is we strictly adhere to a grid system for street numbering.  Generally speaking every 1000 is about a mile (give or take).  And it helped to see the roads dropping from 1200 to 1100 to 900.... 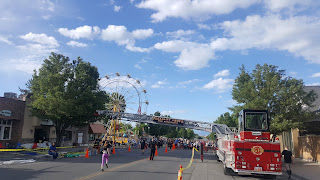 Finally I could hear the crowds cheering and I could see the flicker of the timing clock.  Thank goodness!  I was running with a pack of younger folks and we were definitely fighting for every second.  It is always nice to have someone push you to your best.

The finish line came in a blink of an eye and I was ecstatic to see a 24:3X on the clock. 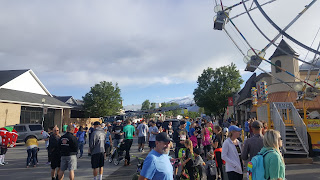 I was really happy to finish.  I had done WAY better than I expected I would.  Again, I had no idea what my pace was and how much further I had to go.  I just simply ran as hard as I could for as long as I could.

I quickly asked around what everyone's Garmin said was the distance.  I seemed to have recalled that the course was significantly short last time I ran it.  One of the first guy's I asked said it was 3.06.  Another two people said it was 3.01.  I am probably going to go with a hair over 3 miles on this race. 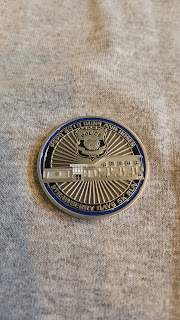 Each participant was awarded a coin.  Looking back at my 2013 post, it looks like it is their tradition.

My car was parked just down the road so I went there and grabbed my camera for some finish line photos.  They also had a huge bunch of glazed donuts (going with the police theme).  Delicious.  They had plenty so I grabbed one for a post race treat and one for the road.

I didn't see any other post race refreshment other than water.  I always bring my own hydration so I had some Gatorade in the car. 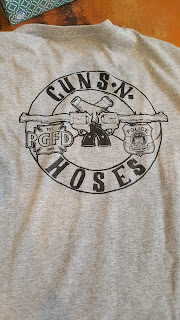 The shirt is of a nice design but it is cotton so I probably won't wear it much.

For $20 I got what I paid for.  I wish they had age group awards, but I think they only recognized the top finishers.

My race performance was solid today.  Even if the course had been accurate at 3.10 miles, I suspect I would've come in around 25:15 or so, which is about standard for me these days.  I am not running a lot of speedwork right now so before the race I had visions of seeing a 26 minute race.
Posted by Eddie Gaul at 11:22 AM