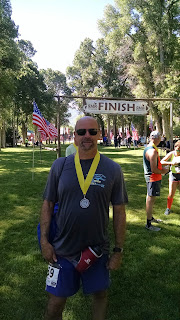 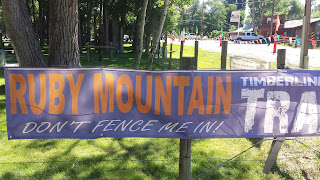 
I live in Tempe Arizona now.  One of the difficult parts of adjusting to a new life here is missing out on some of my favorite races.  The Lamoille Canyon Half Marathon is indeed one of my favorites.

The canyon is located about 25 minutes south of Elko, NV and I have so many great memories hiking and visiting many of the trails there.  It is popular enough for the locals but not too many people outside of the area know about it.

I was getting (super) homesick and I really wanted to go home for a visit.  I decided that I'd couple my visit of returning to Salt Lake with a little bit of a road trip and a race.  I snagged a pretty good deal on air fare and the rest just sort of came together.

I arrived at midnight in Salt Lake on Thursday, slept a few hours and then hit the road mid Friday morning.  I was a little bleery-eyed but it was all worth it. 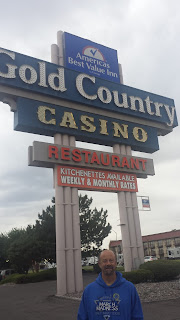 
I rolled into Elko, NV -- about 3.5 hours west of Salt Lake around 3:00 o'clock.  I had broken up the trip by stopping into West Wendover Nevada for lunch and a little bit of gambling (of course).

The packet pick up was at Bristlecone Bicycle shop.  It was good to see Anne, the race director.  I've know her a while and have done many of her races that she holds in the Elko area.

Shari and I stayed at the Red Lion hotel.  It's a good hotel and they usually give us a break on the food.  I didn't sleep particularly well.  I am not sure.  I think I was a little over stimulated from gambling and the room seemed hot.  Maybe I got about 4 hours of sleep. 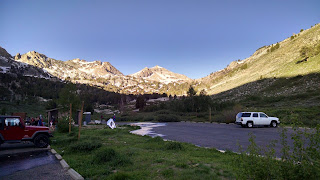 I killed about an hour up there socializing with friends both new and old.  I also managed to snag a foil sheet from a marathoner who had started just shortly after we arrived so I could keep my legs warm.  I had packed lightly for the trip and while my core was warm, my legs weren't. 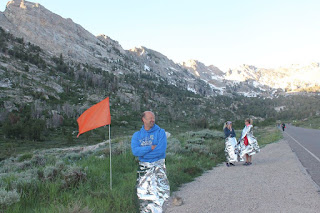 The race started promptly at 7:00 am.  The first third of a mile just sucks.  To make the course 13.1 miles, we have to start about a third of a mile from the top, run up to the top, circle around the bathroom and then head down.

I don't warm up much before a half marathon, but trying to run fast, uphill, not warmed up and at nearly 9000 feet of elevation is just plain cruel.  It is like trying to breathe out of a straw.

Luckily it is short lived and I told myself not to panic.  I'd be making up the lost time after the turn around.

It took a bit to get my wheels working again but the first 2 miles are fairly gentle of a decline. It was nice to take in the cool mountain air and there is a gentle stream rolling next to you.  I just wish I had had time (and energy) to take in a hike and not really race a half marathon -- but I digress. 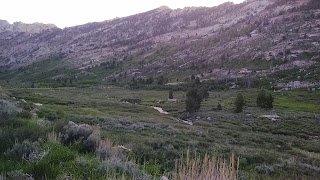 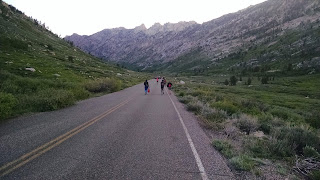 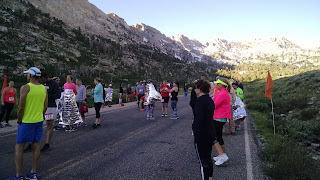 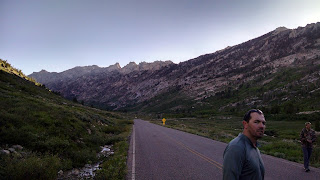 About 3 miles in, I hit my groove.  I knew the course so I knew when the race was going to get tough(er). In the past I've really died in the final 5K when you more or less have to power yourself to the finish line.  However, the first 10 miles are mostly downhill so you can pretty much coast and hope that the hills don't destroy your quads. 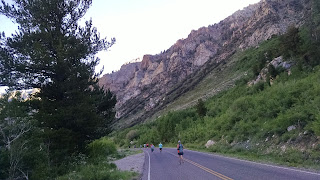 I was running with a group of people but as the race progressed I found myself chasing a group.  I did have to use the restroom but I was tailing what looked to be another runner in my age group.  I knew one of the other runners who was in my age group who was clearly faster than me, so I didn't want to take any chances with at least getting an award.  So that guy was my target.

My legs weren't really responding like I had hoped they would.  I did have a fairly high mileage week and I was starting to regret doing a 4 mile shakeout run Friday morning.  Panic started to fill my head.  I had run a 1:49 last year and I didn't want to blow up on this race.

I was carrying my own hydration for this race -- I had brought some Tailwind with me, which I think went well.  The caffeine in it was a much needed boost.  They had water / Gatorade stations every few miles and while it wasn't super warm it was warm enough.  I was wearing shorts and a t-shirt but the first few miles I had wished I had brought some throw away gloves.

It felt like it took a lot more effort than it was while running.  I was definitely turning in some good splits but it seemed like a lot of work.  I suspect high altitude will do that -- and with Tempe being at 900 feet or so, running at 6000 feet was going to seem like work.

There weren't many flowers out yet but the canyon smelled wonderful.  Lamoille has a certain smell -- it is a Juicy Fruit Gum smell that some wild flower or plant gives off.  It isn't there all the time, but certain parts smell like it.  Also the smell of ragweed was in the air and sometimes it was a bit difficult to breath.

I really enjoyed the canyon and it brought  back a ton of memories of all the places I had hiked over the years.  I wondered how many more times I'd get a chance to visit it -- or if this was it.

There are a few uphill sections on the course and it was so hard to change gears.  I began to worry what the final 3 miles would be when there were more rolling hills.

However, the death march didn't really come.  I took the uphills as aggressively as I could and tried to get back into a rhythm when I was done with them.  The Tailwind drink also seemed to help.

I was still running with people and the guy who was I was chasing had dropped off.  So maybe with some luck, I could nab an age group award.


The final mile is grueling and you no longer have the ability to coast down a hill.  I was tired and I kept looking at my watch counting down the quarter miles.

I was pretty happy to see my Garmin report that I had finished in 1:50.  I was hoping to go sub 1:50, but I didn't really get the early speed I was hoping for.


I was really close to being sick at the end.  I was pretty worn out and I had pushed it at the end.  No one was behind me (for quite some time actually) and I knew I was in for a fairly decent time.  I don't normally get too worked up about downhill races -- I don't really consider them for PR purposes but I wanted to do well.

I grabbed some chocolate milk (actually two of them).  They had a super nice spread of food including a pancake breakfast.  I really wish I was staying another day in Elko as I would've made a meal there, but I had a limited amount of time. 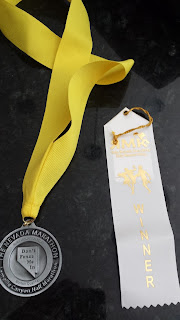 The race directors have a pretty unsophisticated way of putting people into their age brackets (and one that actually works well for a small race).  I could see right away where I finished in the 45 - 49 age group and I had placed 3rd.  Being that I was short on time, they allowed me to pick up my age group winner ribbon and get a photo taken. 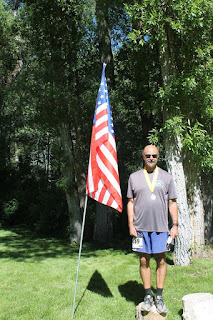 I was really bummed I couldn't stick around longer.  I knew a ton of people there and it was such a beautiful day.  My heart ached when I took off. 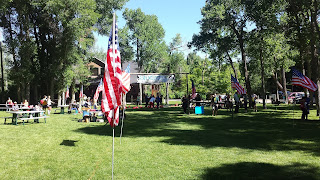 I am not sure how many more Lamoille Canyon Adventures I have in my lifetime.  I now live many hours away and getting there is semi-expensive.  I am just glad I was able to get there and run it once more.

The race was $60 and I registered pretty late.  The bus ride to the top was in a coach bus with a bathroom.  The finisher medal was unique but hardcore medal collectors may be disappointed.  The shirt was cotton but thoughtfully designed for a Nevada race. The race was well supported and organized.  Definitely a top notch job on post race food.

I hope to make it back to this race in the future.  Each time I go, I feel so fortunate that I can run in this locale and enjoy a unique race.
Posted by Eddie Gaul at 4:36 PM