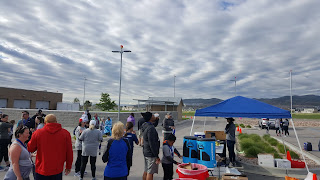 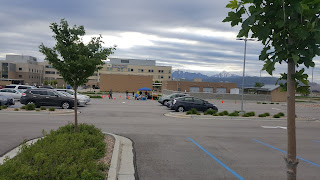 This past weekend I was looking for a race to do.  There were a bunch in the area and 2 of them were downhill ones.  I am not into downhill racing that much.  The times are often really good but they aren't a true time and in my opinion when you run downhill you are upping your chances of injury.  In addition, I have my one downhill race of the year next weekend.

So when I discovered this little race just south of me, I jumped at the opportunity.

My expectations were pretty slim as a result but this was the 10th annual race, so I had hopes that at least it would be managed well. 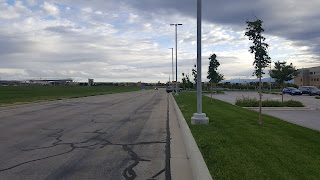 I rolled in about 45 minutes early.  A lot of the small races can be a mess getting your bib and to avoid long lines I like to get there early.  I was one of the first to show up and I got my bib in a few minutes (about 15 minutes before the race started the line had certainly ballooned up).

About 20 minutes before the race started I ran about half a mile to get loosened up and work my way around the course. I had had a little bit of buyer's remorse on this one as it turned out the 5K would be running 2 laps around the hospital while the 10K runners would run 4(!) times. 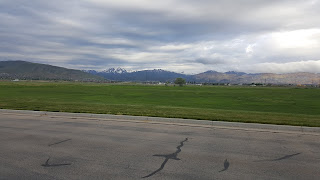 The course isn't exactly oozing with sexiness either.  It was just a service road that circles around the hospital.  They had come up with a route that would be about 1.51 miles for each loop.

The course was pancake flat and to be honest it wasn't awful - although by the 3rd lap, I wanted to be done.

The first lap was more or less just working my way into the race.  I started off right on target, nailing an 8:30 pace.  From what I had gathered, about 90% of the field was running the 5K and there were less than 15 or so running the 10K.  As I passed the finish line for the first time I was sort of kicking myself for not signing up for the 5K.

The second time around I was definitely feeling it.  I suddenly just felt tired.  My pace hadn't dropped off that much but it suddenly felt like it was actually work.  I think it was a bit of the doldrums of running the route for a second time.

I did get a little bit of excitement working off some of the slower 5Ks who were just finishing their first lap but the faster 5K-ers had already left me in the dust.

The third lap I knew what I was in for and I got a bit of a second wind.  At this point, the walkers were the only ones left on the course (and a bunch of children / families).  I was trading places with one woman runner and a friend of mine was about 30 seconds ahead of me.  I was desperately trying to catch up to her but she had gotten off to such a good start and I just simply couldn't make any ground on her.

The course was well marshalled and despite all the turns I was never at a loss as to where to go.  It was also nice to see the volunteers multiple times as they cheered me on and encouraged me to finish strong.

The final lap I felt a lot more confident but I still didn't have a lot left.  I greeted many of the volunteers and said I was done.  The course was also significantly more vacant.  This race wasn't a huge race by any means -- maybe 150 tops but at this point 90% of the 5K people had finished.  I kept trying to make up some ground on my friend but the distance had gotten too much.

The final stretch I kept telling myself to push hard.  I could see in the distance the cones where I would turn right and finally finish. I crossed the finish line in just over 52 minutes.  However, in my opinion, the course would've probably been accurate had we touched the finish line each time we ran by it so it appears to be short by just about .15 of a mile. 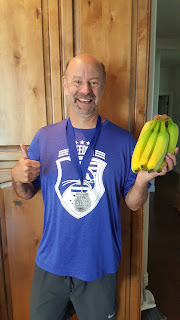 
After crossing the finish line I grabbed some Powerade.  They had a ton of bananas and since most of the runners had already left (again the field was mostly 5K runners) they were giving away their extras.  I grabbed a bunch and spent some time socializing.

I was surprised to get a finisher's medal.  I think I had read that there was one, but I wasn't counting on it.  It was pretty decent -- and again for a $15 race, I didn't have super high hopes for any swag.  (Props: the Swag bag contained a portable phone charger as well!) 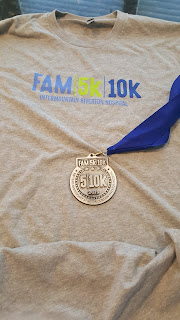 My expectations for the rest had been exceeded.  I haven't paid $15 for a race in a very long time and I clearly got my money's worth on it.  My gripes are fairly simple though:  the course was pretty dull and there wasn't any course support.  Luckily the air temperature wasn't that warm but near the end it would've been nice to take a sip of something.  Had I known that I probably would've stashed a bottle along the course and taken a quick swallow around lap 2 or 3.

Overall, I ran okay.  Definitely not my greatest race but I ran fairly consistently.  I definitely find that 10Ks work my speed and endurance.  I used to dislike them but now I am finding that they are some of the best "training" races for me.

Again, for a bargain basement race, this was a good experience.  I'd likely do it again if the course was different and this weekend was open in my calendar for next year.