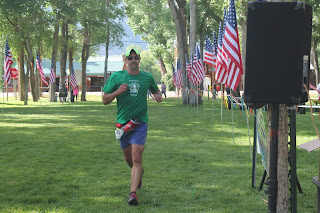 Last year I ran the Lamoille Canyon Half Marathon for the first time.  And as soon as I finished the race last year, I made a mental note to myself that I wanted to run it again.  So when June rolled around, I started to make plans.

One of my favorite places is Lamoille Canyon and I love to hike there.  It is a gorgeous canyon just about 25 minutes south of Elko.  It is easy to get to, but just not close to much.  From Salt Lake, it is about 3 hours away.

The race is a small affair.  They have a full marathon, which looks like it netted about a dozen people.  The half probably got about 75 -- mostly locals and a few traveling from affair (I guess there was a couple from Scotland). 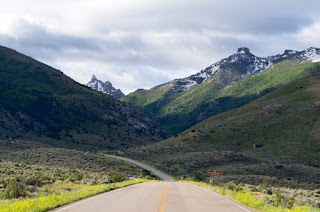 I stayed at the Red Lion Hotel, in Elko and I arrived there on Friday night.  I did arrive early enough to pick up my bib and shirt at the local bike store.  It was an easy in and out and I said high to the race director.

Shari and I wound up carbo loading at Machi's Bar and Grill downtown before heading back to the hotel.  Elko continues to not disappoint with the food and I am glad I avoided the buffet.

I managed to sleep okay.  I knew exactly where to go in the morning and when I needed to be there, so there wasn't much pre-race anxiety.  It wasn't long before my 4:45 alarm went off and I grabbed some food and headed out the door.

They had a single coach bus that took us the roughly 13.1 miles to the top of the canyon.  I quickly made friends with people on the bus as we ascended to 9000 feet.

There was a heavy duty breeze coming up the canyon that clearly wasn't in the valley.  It was cooling, but not cold.  I had brought up a sweatshirt and wound up wearing it until the race started.  I managed to cycle through the bathroom and just as I was setting up my Garmin, the race director was assembling everyone to the starting line.  Thank goodness for no long waits. 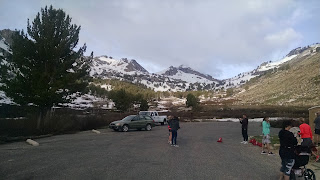 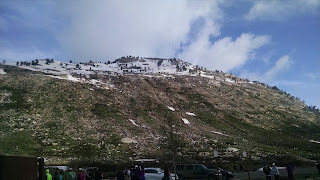 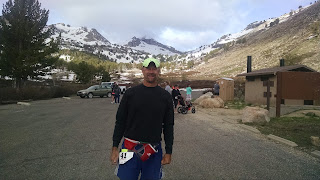 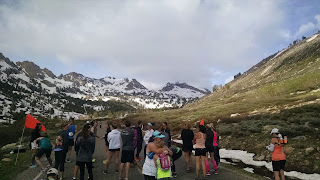 The race's hardest part is the beginning.  You haven't quite warmed up yet and you have to run uphill for a whole quarter of a mile at 9000 feet elevation before turning around and come screaming down the canyon.  That quarter of a mile is a lung burner as your heart rate gets used to running and your lungs get used to breathing thin air.

Luckily it is short lived and you get to make a speedy descent. 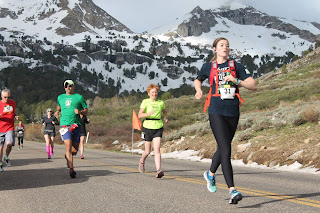 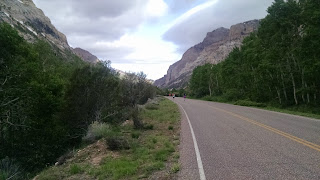 I was definitely enjoying the downhills and I was surprised at my splits.  I just didn't want to crash and burn.  I had vague memories about last year being a long shuffle in the final 5K.  I also had memories of the Idaho half marathon I did last week.

At times I felt a little tired but for the most part I powered through any rough spots.  My only gripe was the head wind.  Initially I was trying to draft off of people, but a race this small, it is hard to find someone who was running the same pace as I was.  And within a few miles I was running more or less solo.  The breeze was cooling but it did take away from my pace a bit.

The course had water stations every 2 miles starting at mile 3.  I do believe in the latter miles they were missing a station.  I am SO glad I carried my own.  I wound up going through most of mine and I only missed one aid station (it was on the right hand side of the road, and I was on the left). 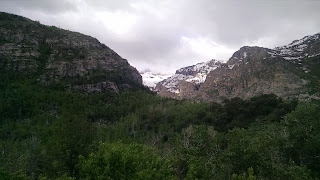 Occasionally I'd pull out the camera and take a picture while running.  But on this race I was definitely running for time.  And I didn't want to have that "one" guy in my age group catch me.

The smell of the canyon, despite not having many wildflowers was intoxicating.  The canyon has a smell reminiscent of Juicy Fruit Gum.  And that smell was present.  There also were a bunch of mini water falls and I could hear the river gurgling below me.  Just a perfect day for a run down a fast canyon road.

As I descended the canyon, I was greeted by the occasional hill.  The first one, at about mile 6 or so might have just been a mountain.  My quads were pretty trashed and it was hard to change gears.  There was also a segment of flat here and I began to panic a bit... .was the last half of the race going to be a sufferfest?

Luckily, the downhills continued again and I was able to coast down them, reeling low 8 minute miles. 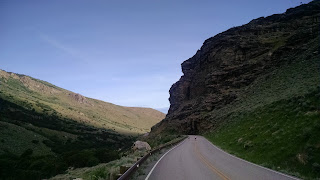 Also, as I got closer to the end of the canyon, I could see sunlight ahead.  We've had a bit of a hot spell of late and I certainly didn't want to bake.  Luckily, the breeze had kept things cool and while the last 5K was warm, it wasn't stifling.

I was working off of some women in the final stretch.  It was good to have company and motivate me to push forward.  I tentatively looked behind me and the fellow that I was worried about was nowhere in sight.  I checked my Garmin and I knew I was on target for a pretty good race.

I was pretty beat up as my quads were shot from the downhill.  But I managed to use my arms and whatever I had left to push the final .5 of a mile along the country road to finish at Lamoille Grove Park. 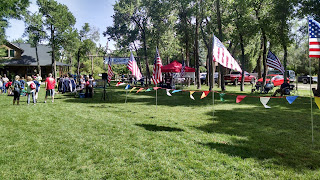 Upon finishing, I grabbed some water and walked off the wooziness I was feeling.  I had really pushed the last mile or so (as best as I could do) and I needed to cool down.  Luckily, the Lamoille valley was cool and there was some shade as well as sun (when I started to chill).

They had a pancake breakfast as well as some fruit for the finish.  One of the local ice cream stores also had a huge supply of ice cream, which was heavenly after the race.

I wound up talking to a ton of people, sharing training tips and our experiences.  People from Nevada are friendly and they were pretty impressed with my knowledge of the state.

I was pretty ecstatic to place in my age group.  I was hoping for second (like last year) but I was satisfied with third.  There was no way I was going to catch the first place guy (he came in 3rd overall). 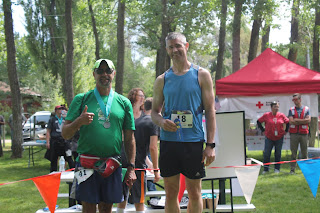 After grabbing my age group award I hit the road.  Writing this a day later, I am pretty happy with the results and my effort.  Even though my time was a little slower than last year, I didn't feel like I crashed and burned.  It was also a stunning run.

I look forward to running this one again next year.  It is always worth the trip and I had so much fun.