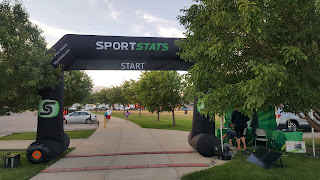 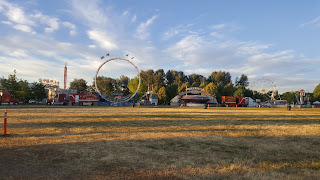 As I write this, I have a race planned for this evening.  A simple 5K.  It immediately begs the question, what am I going to do with myself until it is race time?  Let's face it, I can't go for a hike and I generally want to be outside, so doing another long run just doesn't make sense.  So what I did decide to do?  Well, run another 5K in the morning of course.

I found the Taylorsville 5K just down the road.  I've seen it every year and for some reason or another I don't sign up for it.  Maybe I felt like I had gone beyond 5Ks that they weren't showing up for.

But if I want to run faster, a good training mechanism is to do 5Ks.  They are a great mix of just enough endurance followed by pure speed.  It is almost pure pain from the get go. 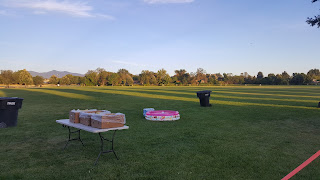 The race starts early enough to avoid the following parade and hub bub of Taylorsville Dayzz.  A weekend celebration / carnival thing to celebrate the community.  I live right on the border of T-ville and so it was a short 4 mile trip to the race site.

It was a 7 AM start time so I rolled in just after 6:15.  I never know what to expect from small races, so I try to plan for the worst and hope for the best.  Fortunately this race was run extremely well from start to finish.  Packet pickup was a snap and I was set to race in under 3 minutes.

During the time I used the bathrooms and did about a mile warmup.  I felt pretty good, but it was warm.  Carnivals are often the best race sites because they have a ton of bathrooms.  Also I was there early so parking was easy peasy.

The race started a few moments late but not a big deal.  The race is held at their community park.  I was really worried about all the turns and navigating the course.  Once again my fears were not realized.  The course had plenty of volunteers at the critical turning points.

The first mile I went out pretty hard.  Filled with confidence from last week's race, I wanted to do better and so I started off fairly aggressively.  I was hemmed in, in spots, but overall, within a few minutes I could run as fast or as slow as I wanted. 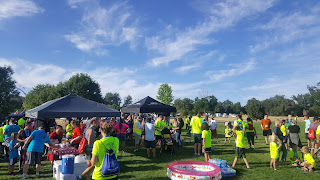 The course did a series of turns on the bike path that circled the city park.  It was flat and there were arrows and volunteers at the turning point.  I felt like my breathing was extremely labored, but my legs felt good.  I was wearing my racing flats, which gave me some additional confidence.  I hit my target pace of about 7:50 for the first mile, but I knew the screws were being tightened.

The second mile was a guy check.  There was one aid station that I bypassed.  Fortunately it wasn't too hot out and it was "only" a 5K.  There were a few tiny rises here but overall the course was pancake flat.

Mile 2 to 3 I was definitely feeling ragged, particularly in the latter half.  I got passed by about half a dozen people as my once stalwart form fell apart.  Again, I kept telling myself, hammer it -- it's only a 5K.

At this point too we left the city park and were running down a suburban street. It was shaded and actually quite nice.  That only last about half a mile though before we re-entered the park and re-ran a small section of the first mile to loop back around to the starting line. 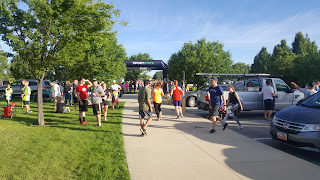 Holding back feeling kind of sick, I kicked it to the finish line, running in under 25 minutes for a legit, 5K course. 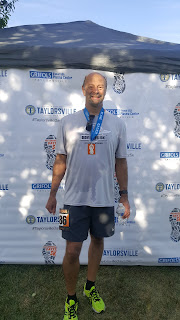 I was pretty happy with my result.  This is the first 5K in a while that came in right at the distance and it gave me a good barometer of where my fitness is.  I was using this as sort of an "A" race and was trying my hardest.

Unfortunately, I didn't place in my age group.  They had 10 year increments (boo!) and I would've placed or come close to placing in the age group before and behind me.  I kind of figured it was going to be a long shot on placing as the race was well attended (I heard about 300 runners were in attendance). 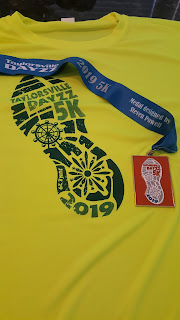 I paid just over $20 for the race -- about a week before the race.  Not a bad deal for a well managed 5K.  I got a decent swag bag as well plus a tech shirt plus a finisher's medal.

Post race refreshments were bananas (lots of bananas), water, Gatorade, and chocolate milk.  There were also a ton of racers there that I knew, so afterwards it was part social event.

Sitting here typing this recap in, I feel really good about my race.  It wasn't a super fast race but I held on strong and felt good about what I did.  The 5K is definitely humbling -- the distance is relatively short but it is all about speed endurance -- one thing that I need to work on.

I'd definitely do this race again.
Posted by Eddie Gaul at 11:37 AM