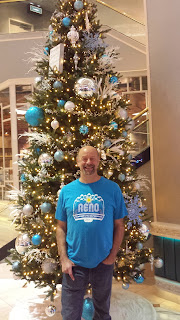 Well this year was mixed -- as usual.  I saw my times stay about the same and I was certainly racing a lot. 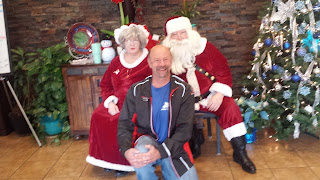 I had a shot at 2000 miles this year but I sort of realized I was getting close a little too late.  It was a soft goal of mine to hit it, but I wasn't really training for a marathon at all this year.  I started to try and run a 1000 mile week about 8 days shy of the year's end and I did about 2 days of 17 - 18 miles a day and I was like, no way -- not happening.  So I did the smart thing and just settled with coming up fairly close to 2000.

Right now, I am just trying to stay fit, enjoy the cooler weather and burn some calories.  I need to be ready for the St George Half Marathon in about 3 weeks.  I really enjoy that race and am looking forward to doing it this year.

So without further ado, let's look at last year's goals and what I accomplished in 2018: 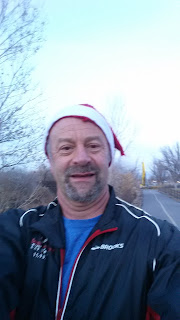 I ran the following race distances:

I really took my racing up another notch this year in sheer volume.  It was fun...  I tried some new races as well and I really did a ton of racing in the spring -- particularly the half marathon distance.

I did discover that the half marathon is starting to wear my down more than usual.  In the past, I could mail them in.  This year, they seemed a lot harder.  My hunch is that it was a bit of fatigue as well as the fact that I am getting old / heavier and going that kind of distance is going to need more recovery as well as understanding my new pace. 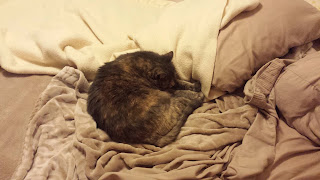 I still have my beautiful cat I found on the bike trail from last year.  She is beautifully behaved cat and we love her to bits. 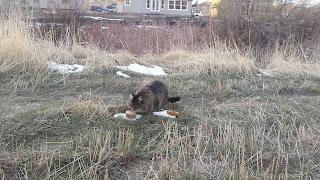 As time went by this "feral" cat would allow me to look at her and feed her (I am presuming it is a her) but not actually pet her or touch her.  She'd back away if I approached.

When I moved to Arizona this past summer I arranged to have her fed.  And when I came back and spotted her she came running up to me, meowing and rubbing against me.  It was awesome.

Since then, she lets me pet her and waits for me every day.

I've tried twice to take her home but she has escaped my efforts.  I am hoping soon to see if she'd be happy living with us. She is a bit ragged looking now, but I bet she cleans up nicely.  Nice thing is that she is well fed and no longer looks hungry all the time.

Get Faster -- Take at least 1 minute off my 5K time

Mostly fail on this one.  I didn't drop the weight and my speed workouts were much on hiatus most of the year.  I started off the year running about 24:30 and finished around 25 minutes.  I did, however, do some speed work from time to time and I did a lot of shorter races.  I also did NOT lose weight this year.

Score on this one.  Since I moved to Arizona in the middle of the summer, I was easily able to do new races.  Even if I hadn't moved, I would've done new races.  However, I did not explore one new state.

Have some restraint at buffets

For the most part, success.  I did do better in showing restraint and I rarely left buffets feeling so terrible I thought I was going to be sick.  I also watched calories, but as I age, my metabolism is slowing down, so this year I wound up gaining a pound or two.... which further slows me down.

Mostly success.  I did a lot of hiking this year.  I did not join a gym -- although when I was living in Arizona I had access to a gym at work and I definitely took advantage of it.

Run a marathon:  I just didn't have the heart for it this year.  Even going out and running 18+ miles didn't seem to interest me.  I think the longest I ran all year was about 16 miles (in one shot).

Favorite Race: Ruby Mountain Relay  I really enjoyed this race.  It was beautiful and held in one of my favorite places in the world.  I didn't necessarily run well and the race was grueling, but I really enjoyed it.  When I think back on 2018, this race comes to mind.  2nd place:  Saints and Sinners

Best Performance: Saints and Sinners ... Naturally this race was downhill, so I am going to turn in a good time.  Overall though I felt like I ran really well and wasn't dying too badly near the end.  2nd Place: Night Fury #2 -- Surprisingly, I had a good race in 100 degree temperatures.  Looking back, this was kind of fun and a new experience.

Worst Performance:  Too many to mention.  Some of the worst include: Jordan River 5K, Green Eggs and Ham 5K, and the Riverton Half Marathon.  I just remember suffering through them and just barely being able to finish.  Not a good day for sure. 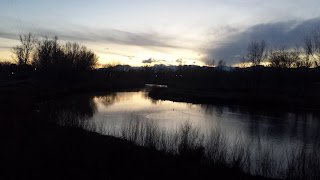 I started off the year with life as normal.  However, at some point I felt like switching jobs.  I don't remember exactly what my motivation was at the time.  I think I was getting pushed to move to Arizona

The job market for software developers (which is what I do for a living) is pretty hot and I was surprised at how quickly I got responses.  I felt like I did an okay job interviewing and actually had a few prospects.

I wound up taking the job in Arizona.  At the time, I kind of didn't want to move.  But I was trying to make other people happy with my decision.  I really LOVE Utah and I loved my life and the setup I had.  I had a job that I am pretty well respected at and for the most part I enjoyed going to work.

My experience in Arizona wasn't that great.  The job was more or less a mismatch for me and once the "hot as hell" summer kicked in, I decided that life got worse for me.  I love being outside and sitting by the pool and burning my feet off just wasn't happening for me.

Luckily, I was able to move back (I still had my house here) and my job was thrilled to have me back.  So in theory, it was a 60 day "leave of absence".

It certainly made me appreciate all the fun things I have here going on.  Yeah it gets cold here but generally I can find something to do all year and it is nice to have a strong community of runners / racers.

The other fun thing I did in 2018 was I finally did the Highway 50 drive.  I didn't do all of it, I am missing a stretch from the Utah border to Ely (which I have never driven) but I can say I've driven from Ely, NV to Lake Tahoe on Highway 50.  And I loved it.

At the time I drove it, I kind of knew I was leaving and it was sort of a farewell to Northern Nevada.  To appease me, I was told we'd take vacations in northern Nevada, but I knew that wasn't likely to happen.  It would be a hard sell to get Shari to go and I just didn't see it happening as much as I'd like to have.  In fact, it was one of the things I really longed to do when I was sitting in an air-conditioned apartment in Phoenix in the dead of summer: visit Northern Nevada.

The Highway 50 Trip was a trip of a lifetime and it seemed to trigger my interest in seeing more of it -- in more detail.

Other than that, 2018 didn't have any major revelations for me.  I still have the same job, live in the same place and I still run nearly every day.

It is nice not to have any races in the queue right now.  I am still training somewhat hard and need to keep my miles up for some spring half marathons.  I certainly wish there was an occasional 5K to keep sharp though...

Email ThisBlogThis!Share to TwitterShare to FacebookShare to Pinterest
Labels: running, This Year in Running