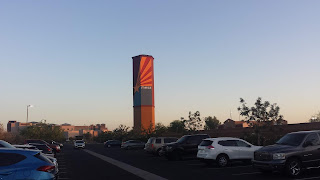 Well there wasn't a whole lot on the racing calendar for this weekend.  I searched high and low for a race and the only one that was close by was the Night Fury 5K -- a Friday night race.

The race started at 8 PM and in Phoenix, that is still pretty warm.  Granted, by 8, the sun has set and the temperature is less intense but it is still hot.

I haven't run before in 100+ degree weather.  I've run in some pretty hot races, but this was a new "high" for me.

So it was with some trepidation, apprehension, and a little regret that I drove the 2 miles or so to the starting line and got ready to race on a hot Friday night. 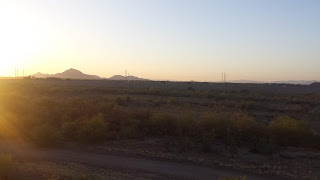 
I rolled in around 7:15, got my bib and a collector pin.  In lieu of a shirt they give you a pin and a pretty sweet custom designed finisher's medal.  I would've liked a shirt (I don't know why, I have a ton of them) but they were offering some for sale. 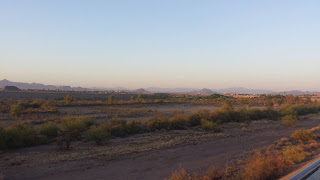 The race started a few minutes early, which I was glad for.  I had done a very limited warm-up as even standing around resulting in me working up a sweat.

The course is run along the Mesa / Tempe bike trail.  It is pancake flat and a asphalt / concrete trail.  I wore my Saucony Fastwitches and so I felt almost every foot step along this way.

Initially I was hemmed in at the start.  With about 200 runners cramming their way to the starting line, it was slow going for the first couple of hundred yards.  I wished the race director had encouraged slower runners to line up in the back.  So I had to spend some energy weaving around much slower folks.  It probably slowed me up a bit but not a big deal.

The race director encourage people to take it easy.  With it being a 100 degrees, there was plenty of opportunity to suffer from dehydration or heat stroke.  I backed off quite a bit for the first half mile to see how the heat would affect me.

I had worked my way up quite well in the first half mile and I began to look at my competition.  I saw some folks my age as they made the turn around at roughly the .6 of a mile distance.  I felt I was in pretty good shape to fall somewhere in the top 3 for my age. 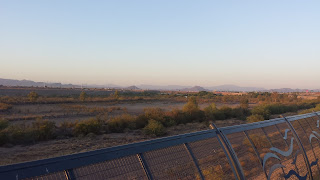 The race director had said we'd run a half mile out, turn around and come back to the starting line for the first mile.  I was worried the course was going to measure long when I came back to the starting line with about 1.20 miles under my belt.  I definitely hate when course go long.  I'll take .03 plus or minus on the distance but any more than that....  no bueno.

I was passing quite a few people on mile 2.  I was hurting though and I could feel the heat weighing on me.  Was I overdoing it?  Was I going to pass out?  It was warm and as I passed the first water stop I grabbed some water and tossed it over my head.  I don't think I've ever used a water stop in a 5K before.

At this point it was dark and I was running as quickly as I could.  It was too dark to look at my Garmin and I didn't want to fool around with the light on it.  Occasionally I'd take a peak at it as the course was illuminated by the park lights.  I was a little sad when I saw that I hit an 8:10 mile.  I would've liked to have about 15 seconds less.

I was still passing a fair amount of people.  I think there were some folks who had started fast and let the heat get the best of them.  I was tailing a guy who looked to be in my age division and I made it a point to try and pass him.  However, every time I stepped on the gas he was able to match me and when I faded he put some distance on me.

I suspected the course was going to run long but how long... I wasn't sure.

We were running by the freeway and ran under the 101.  I had been there before a month ago, so this was somewhat familiar territory to me.  I train on the western section of the trail, but I rarely run that stretch.

I was crestfallen when I another guy my age flew by me.  I was beginning to have doubts that I'd place in my age group.

The finish line came into view and I picked up the pace.  Unfortunately so did the two middle-aged guys in front of me.  I wasn't going to catch them....

I collected a super cool and heavy-duty medal when I crossed the finish line.  The two middle-aged guys in front of me finished well ahead of me.  I suspected I would not be in the age group ring this race.  I was tempted to go but I wound up socializing with fellow runners.

I didn't even look at my time (it wasn't until this morning that I looked at it).  I sipped on some Gatorade and waited for my stomach to settle down.  I wished I had brought my camera and taken pictures of the folks finishing but it was probably a quarter mile walk back to the car.

Awards took a while and I was tickled pink to get third in my age division.  It's been a while since I've gotten one.  While the race was smallish, there were some quick runners there.

They had water and popsicles  and I think some Gatorade.  The race was about $25 so it was on a budget.  I had brought my own cool drink so that helped.  I felt like I had totally gotten my money's worth though -- it was professionally run, timed, and orchestrated.  They also had a drawing for various prizes (including entries into the next race) but alas, I didn't win.

They hold a lot of races on this course.  Would I run it again?  Sure, why not.  The medal was super cool and there was a good crowd there.  I had way more fun than I thought I would plus it was nice to get an age group award.
Posted by Eddie Gaul at 10:31 AM