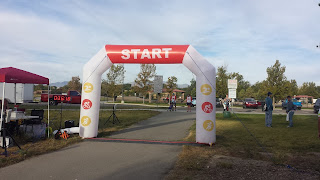 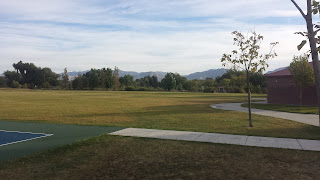 The race is about 2 miles from my house and I knew the 5K course like the back of my hand.  So I figured why not...  It'll be good to get a little bit of speed work in and support a locally run race. 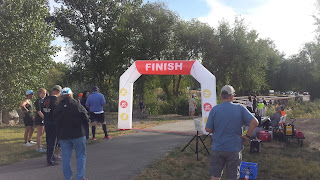 I got to the race site about 40 minutes early.  I knew it was going to be a lightly attended from what I was gathering on Facebook.  I grabbed my bib, socialized a bit and then warmed up for a bit.

The half marathon had started at 8 and the 5K started at 9.  When we started to assemble near the starting line I found myself standing with about 50 - 60 other runners.

The race started on time and before I knew it, I was on my familiar route: the Jordan River Bike Trail.  The race started at Millrace park and proceeded north to Arrowhead Park, on the edge of Taylorsville.

I figured the course was going to be a bit short from the get go.  I've used my Garmin so many times on the route that I knew from where the race started to the point where we turned around, it was only about 1.40 miles.  Sure enough I was pretty much correct.

The first half a dozen runners took off.  When I was looking at the competition at the start I figured they'd be leading the race and they left me in the dust after about half a mile.  I was chasing after the 3rd place girl.  I looked behind me and no one was behind me.

The first mile went by quick. When my watched buzzed at what I expected to be the first mile, I was happy to see a 7:49.  I was pretty happy with that but I knew I was fading fast.

After about 1.25 miles the route went on to a fiberglass type of suspension bridge.  This was kind of slippery and there were some leaves on it.  Normally I am not running that quickly on the zig-zaggy bridge and there were a few tense moments on it.

The turn-around was right where I hoped it would be.  There is a tiny looped-park at Arrowhead park and I grabbed a sip of water from the aid station and followed the loop back.

The 3rd place girl was long gone and when I was coming back the nearest male was probably a minute behind me.

I let off the gas a bit.  My place was sort of solidified at that point and to be honest I didn't have a lot left.  I wasn't not surprised to see an 8:45 second mile.  It made me upset a bit that my half marathon pace was now my mid 5K pace.  But I was running into a bit of a head wind and to be honest I was hurting pretty bad.

Once I got within a half mile of the finish I looked behind me and the guy who was chasing me down was now gaining on me.  He looked to have been my age and they were giving away a free entry into next year's race if you won your age group (outright).  I really tried to dig deep here but I was feeling like I really had expended myself.

Luckily, the last .1 of a mile or so I managed to really push it and I outgunned him.  I think if there were another quarter or half a mile he would've easily overtaken me.  Definitely glad I hadn't run the half today -- I just didn't have it. 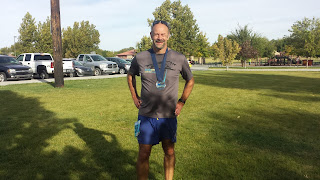 After finishing I walked off the nauseous feeling I had.  They were handing out pretty sweet medals for a simple 5K.  I think originally there was going to be a full marathon here and with race attendance down, this race was pretty much a fire sale.

I walked back to my car to get some drink and that is when the dry heaving came on.  I am not sure what it is but it could be allergies or milk issue or something, but my throat gets clogged sometimes and it creates a gagging sensation.  I managed to get to a drinking fountain to help clear my throat but it was an uneasy few minutes. 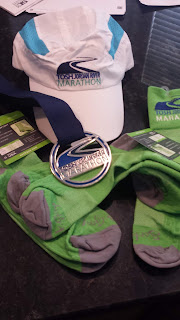 The race didn't have a t-shirt.  You did get a pair of socks (or two) which were actually pretty nice.  I also grabbed another hat.  Never can have enough of those.  Age group awards (which I got second in mine) netted me an additional pair of socks.

They had water, bananas and ice cream sandwiches at the end....

I paid $20 for this race, thanks to a discount code, the week of the race.  For a 5K that is a bargain and I was happy with my experience.  I would like to see the distance on the course fixed though.

The course was well marked as well. So even if I didn't know the route, I wouldn't have had any problems.

They plan to have this race again next year and I should be able to do it in some capacity.
Posted by Eddie Gaul at 1:21 PM