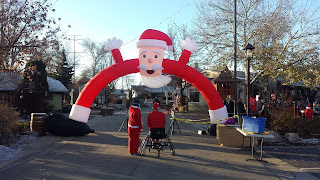 Well, I should point out I rarely do themed run -- let alone fun runs.  But with the race calendar winding down (this should be my last race of 2018) I decided to put this one on my calendar.

It wasn't a super cheap race, but it seems to be all the rage to do these dress-up races and run.  For your entry fee you get a Santa suit, a supported 5K and refreshments at the end.  In addition, the race was practically in my backyard -- a mere 2 or 3 miles down the road.

I think I got in right before a price increase and got a guarantee of a medal.

I wound up picking up my bib on Friday night, which was probably a pretty decent idea.  It gave me ample time to try out the suit and see what would need to be tweaked before running it.  I found that the pants did NOT fit right at all and that the best option was for me to wear my shorts over them.  I know this is kind of a fashion faux pas, but you know what -- it kept my pants up. 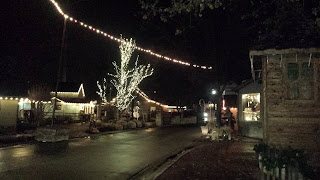 The race started at 9 AM and I rolled in sometime after 8 AM.  It was chilly and I found myself there WAY early.  Luckily time flew by pretty quickly and I managed to use the bathroom and do a few drills to get semi warmed up.

I was hoping for a decent race, but given the potential for ice on the bike trail and running in a bulky Santa outfit, I sensed that this was going to be a fun run in the truest sense. 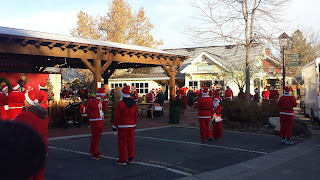 I've run this race's route several times and if memory serves correctly it was my first 5K in Utah when I moved here in 2012.  I only wish I could run what I ran back then....

It was chilly but the Santa suit kept me warm.  Under it, I had underwear and a regular shirt.  I also wore sunglasses because it was intensely bright out.

The race started at 9 AM and immediately I regretted not doing a warm-up.  Almost from the get go it seemed hard to run.  Usually once a race starts my adrenaline kicks in and I am able to take it up a notch, but this morning ... no such luck.

It was crowded at first and I think there were some folks that were jammed up at the front that probably shouldn't have been there.  Also there are a lot of turns at the start and it was icy under a bridge.  So I lost a few seconds to that.  But 95% of the Jordan River Bike Trail was in decent shape. 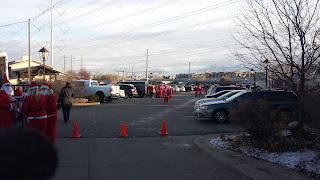 The first mile felt hard.  Nothing was responding very well and I was hurting too much at the start.  My legs just didn't feel fast.  I hadn't used any beet juice before hand and I was using a heavier shoe on account of potential ice.

I wasn't surprised to see the first mile go by in 8:15.  It clearly wasn't what I wanted because I was hurting.  On the plus side, I didn't see too many folks my age around me.  There were a few younger folks leading the pack, but very few middle-aged guys.

About 1.25 miles into the race the trail got shady and there were some slick spots.  I had to turn it down a notch to make sure I didn't fall on my face.  There were a few spots where my shoe literally skidded a bit.

Also it was at this point I realized I was warm.  The cotton material of the Santa suit certainly didn't breath and I was feverishly trying to roll up the sleeves.  I was also wearing a Santa hat which also capped the heat.

The turnaround was marked by a water stop and there were about 20 or so runners in front of me.  There were a few other runners behind me, but the majority of the race were what appeared to be casual runners and families.  It was cool getting lots of cheers and greets from everyone as I returned back to Gardner Village.

I was hoping I'd get a second wind on the way back but there really wasn't any luck.  I was chasing down some of the top female runners.  Occasionally another runner would pass me, which is always heartbreaking.

I kept looking at my Garmin hoping the distance would magically be short, but this course always measures accurately on my watch.  In fact this time it ran a little long (strange).   Either way, I didn't have a lot of speed left as I ran through the finish line. 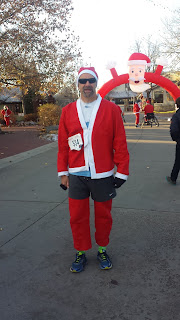 
I was really disappointed with my time.  26:19 is one of my slowest times ever for a "normal" 5K.  Granted, though, I was wearing a bulky Santa suit and the conditions were less than ideal but still, I was hoping for at least a 25:30.

In the long run, it really didn't matter.  I placed first in my age group, but there weren't any age group awards, so sadly this was a fun run in the truest sense. 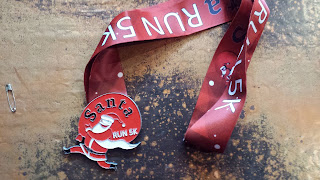 There was water, cookies and candy canes at the end.  Since I had registered early, I managed to snag a finisher's medal which was kind of cool.  It is nicely designed.

The race was fun.  It got me out of the house and the weather conditions were mostly good.  You also get to keep the Santa suit, so I am sure at some point I can put it to good use somewhere else.

I was disappointed with my race result.  It was a flat course and from the get go it was just a tough race for me.  While I wanted to run hard, it just wasn't there.  More than likely I sort of had written the race off mentally on account of the bulk outfit and less than desirable trail conditions.  Also, another minute or two wouldn't have made any difference other than to my ego.