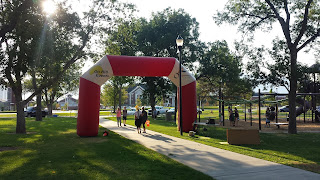 
This weekend there were a TON of races of the area.  3 half marathons and several shorter races.  I didn't think I was quite ready for a half marathon and 2 of the 3 were downhill ones.  Downhill races, while great for overall times, are tough on the body and I just tend to avoid them.

So I trolled over the UtahRunning.com and stumbled upon the Green Eggs and Ham Race.  It is a Dr Seuss themed race and it was just a few miles down the road from my house.  It wasn't just a fun run -- with awards and medals at the end and I've been focusing on shorter races this summer (and needed one for my virtual 5K in the Arizona Sunrise Series) So I figured why not jump into it.  It was close by and I know the race director at OnHillEvents.Com.

I rolled into the race site with plenty of time to spare.  A mere 7 minute drive from my house to the Veteran's Memorial Park in West Jordan.  Despite it being that close, I had never been there before.

The race called for 3 laps of just over 1 mile around the park.  It was held entirely on sidewalk.  Not the greatest course in the world but at least it should be fast with virtually no elevation loss or gain.

I figured the race would be small and sure enough it was.  There were maybe a 100 people there at best.  Bib pickup was a snap and I grabbed my Dr Seus hat and shirt and spent about 20 minutes warming up.

The race, as usual, started right on time and almost immediately, upon running I felt like it was a lot of work just to run fast.  I had warmed up and everything but my legs weren't feeling it and to be honest, my motivation wasn't there.  No age group awards on account that the race was so small and I saw 3 blazing fast runners pull ahead of me.  Darn it, any chance of a post-race award vanished.

Still, I dug deep and kept working my way around the park.  Only one guy passed me and every now and then I checked behind me and there was NO one behind me for quite sometime almost throughout the race.  I was chasing down the second place girl and I was hoping I could at least use her for motivation. 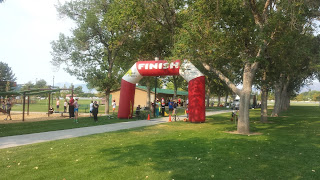 The first loop went by quick and any fears about missing a turn or getting misdirected stood unrealized.  I was dismayed to see my Garmin chirp out an 8:09.  I knew I was running slower and struggling but this was the ugly realization that it was true and not a figment of my imagination.

I told myself the second mile would be faster and I tried to work it up a notch.  But I just felt off.  The second place woman was pulling ahead of me and I tried to push hard but it wasn't coming.

I almost wanted to walk when I completed the second loop.  I was breathing hard and I knew the last mile was going to be a rough one.  Also, I was a little tired of the course.

Also I had to navigate around a lot of the 5K walkers / slower folks -- some who had bunched up and were walking as a family.  It wasn't terrible and I got some support from them, but I had to jump off the sidewalk from time to time to dodge them.

Finally, I completed the last mile and I didn't even both to look at my time.  I knew it wasn't good.  I pushed it as hard as I could even though there was no reason to.  I suppose I was hoping to just skirt the 26 minute barrier but I just couldn't do it. 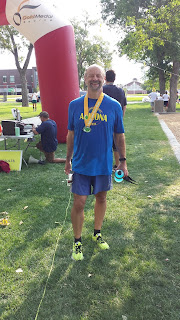 I wasn't super upset when I finished but I knew it wasn't a terribly good 5K for me.  I had done a total of 17 miles on Thursday, a mere 48 hours before and while I feel pretty good I am sure my legs are still recovering.

I almost left since I wasn't due for any awards, but as usual I recognized a few people and decided to socialize.  I was pretty much the last person to leave the area. 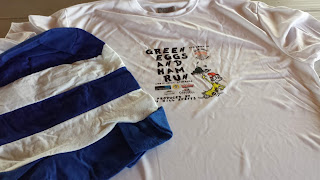 The race had a hot breakfast of ham and eggs (of course).  Being a vegetarian, I only got a tiny portion of eggs.  They did have a nice chocolate milk though, which is always refreshing.  Also, I got a finisher's medal, which was actually nicely designed and a high-quality medal.  Shirt was cute too. 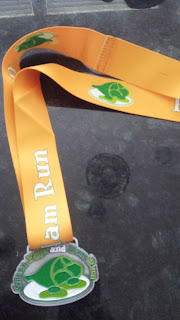 I registered at the last minute for this race, so I paid dearly for it.  About $40.  Pretty expensive for a 5K but it got me out of the house and I had fun and entertainment.  It was an honest course too and measured up nicely.  Every now and then it is nice to do a low-pressure 5K and use it as a speed workout.  Maybe next time I'll remember not to do a long run so close to a 5K.