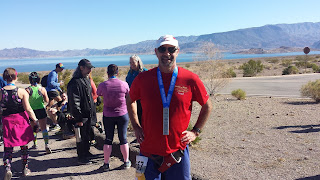 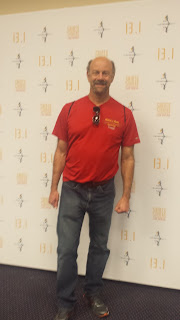 
I am not sure what possessed me to do the Saints and Sinners Half Marathon.  I think it was an excuse to go to Las Vegas, get out of town, and do something new (one of my New Years Resolutions).

I am familiar with the course given that I have hiked the area a bit and I ran the March Madness Half Marathon there last year.  However, this course started in Bootleg Canyon -- in the heart of Boulder City and allowed me to descend onto the Lake Mead Train Trail and then finally finish near the shores of the legendary lake.  The lake is the primary water source for southern Nevada and also the home of the Hoover Dam.

So a few weeks before the race was slated to begin, I plunked my money down, booked the Hoover Dam Lodge Hotel and made my way down to Boulder City -- a city that borders the Hoover Dam and Arizona / Nevada state line and about 6 hours south of Salt Lake City.

I left Friday morning and got into town about 3 o'clock Nevada time after having lunch in Mesquite, NV.  The packet pick up was at the Henderson Convention Center.  I have never driven down the older section of town.  Kind of interesting.

The pickup was sort of chaotic, but I got in and out fairly quickly.  Unfortunately, I think I got last year's shirt.  They were out of men's XL and were giving out last year's.  I was happy simply to get a shirt however.  Given that I had registered as late as I had, there was no guarantee I was to receive a shirt at all. 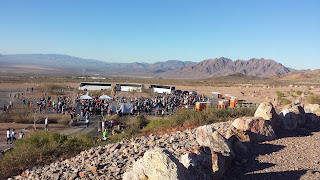 
I got up 5:45 and got some food and drink in me and got ready for my race.  Shari was going to drive me about 5 miles to Bootleg Canyon Park, drop me off and then head back to the hotel.  This worked out extremely well.  The drive time was less than 10 minutes.

It was warm out and my fears of having to sit around for 40 minutes waiting for the race to start while shivering in the cold were unfounded.  I had brought some throw away gloves with me and I wound up not needing them (got rid of them at the 3rd aid station).  I had a short sleeve shirt and shorts.  I was 100% fine and am SO glad I didn't over dress (there were a lot of folks over dressed). 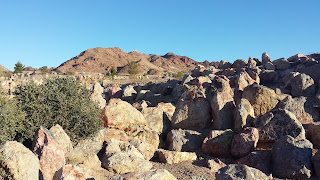 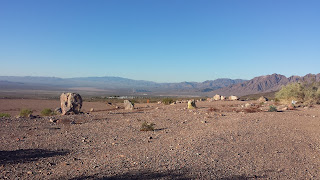 I spent my time milling about, using the rest room, and chit chatting with various people (turns out the Utah contingent was quite strong).  The rest room situation was good, especially 30 minutes before the race, but I suspect the porta-potties got long lines closer to the start. 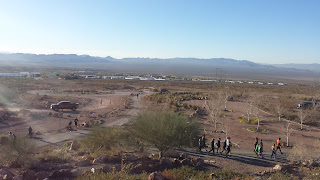 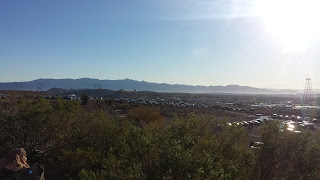 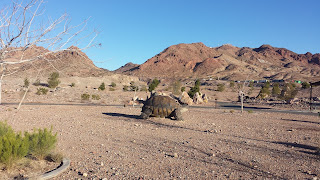 After the National Anthem, we headed on over to the starting line (it was at this point that I turned off my phone) and it started pretty close to 9 AM.

Almost immediately the course started off with a gradual downhill.  I never really know how to pace myself with a downhill half marathon.  The pace I am running is taking advantage of the downhill but it clearly is faster than I'd like it to be.

I just decided to go with it.  So long as I wasn't breathing too hard I figured I'd be in good shape.

I burned through the first 5K in less time than last week's 5K.  That's usually a bad sign, but given that the first 3 miles involve a lot of downhill, it wasn't unexpected.  My legs were a little tired and didn't feel very fresh but my breathing was good.

I was running along the Boulder City bike trail.  If you drive from Vegas to the Hoover Dam, you'll probably see this wonderful bike trail along the I-93.  I've always wanted to run it and was certainly glad I was going downhill.  It would've been a grind had I been going up hill.

I had my first gut check around mile 4 or so.  At this point you get a good quarter mile (or maybe longer) up hill.  I saw some people ahead of me begin to walk.  It was a grind and I began to wonder if I had burned out my legs.

Luckily the down hill section returned and my legs bounced back.  But the change in gears certainly had taken a toll and I just didn't feel like I had it in me.  This was looking to be a bad race.

Mile 6 started to get real.  I no longer had the aid of running downhill and I felt like it was warm.  I kept forcing myself to hold on. I remembered running the 6 Tunnels Half marathon along this section and just feeling like I was going to die.

The temperature cooled down while running along the train trail.  The sun was still rising and the trail was enveloped in shade.  The wind was also gone.  However, the trail at this point is crushed dirt.  So you don't get any bounce and it takes a bit more energy it seems to really run fast.

As I was running I was trying to figure out when the turn-around was going to happen.  I knew once I got to the turn around that it would feel like the race would be in the closing rounds.

The turn around finally came at the final tunnel.  Basically, you ran through a long tunnel (maybe a 100 yards or more), came to a water stop and then immediately turned around.  The problem with this is that it caused your Garmin to freak out as it hasn't made a solid connection for a few minutes. For most people, it meant that their Garmin was no longer recording accurately.  Post race reports indicate some people came in at 13.7 miles and others 12.7.

When I hit the mile 9 marker my Garmin read 9.15.  I also didn't see the connection icon lit, so I have a feeling it was guessing.  And up until this point, my Garmin and the mile markers had been in sync.

Miles 10 and 11 were also .15 miles off.  However, a few minutes later after hitting the official 11 marker, the 12 mile marker showed up.  Something wasn't right.

I was really happy when I hit the 11ish mile marker.  The dirt trail ended and I was back on asphalt and some really nice downhill.  It wasn't crazy downhill, but it definitely helped me pick up my pace.  I could almost smell the finish line as I descended to Lake Mead. 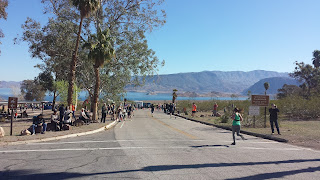 The final quarter mile is a super fast downhill.  I looked at my Garmin and figured I had a shot at going under 1:50.  I turned on the jets and cruised under the "Sinner" finish line (it was closest). 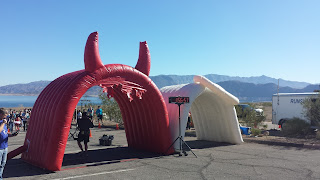 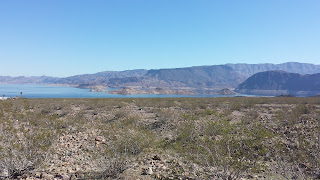 After crossing the finish line, I walked off any nausea I had.  The plan for getting back to the hotel (and trying to get out before the 11 AM check-out time) was that I would text Shari and I would run back to the pay gate to the Lake Mead National Park entrance.

The problem with this is that I had just run 13 miles.  The route back to the pay gate (and avoiding the $20 entry fee) was mildly uphill, about a mile to a mile and half,  and timing it with Shari.

I grabbed a donut hole, filled my canteen, got a few pictures and then made my way back up.  In short, that part sucked and I walked bits and pieces of it.  Hopefully people who were running to the finish line didn't think I was showboating by running the course in reverse to get back to my ride. 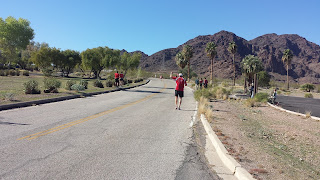 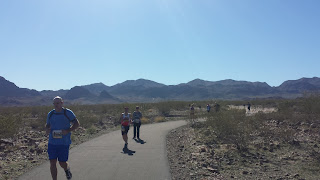 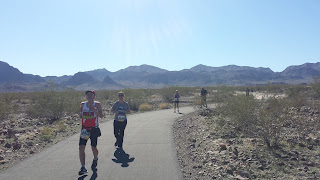 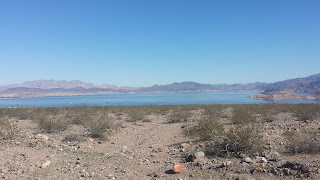 The organizers of the race did have a shuttle bus back to the starting line, but I really didn't want to wait and that took me further than I needed to go.

In short, though everything worked out and I was able to give a bit of support / encouragement to the finishers coming in behind me.

I liked this race.  The course was absolutely stunning and it was fast.  That doesn't mean it was easy.  The pounding it takes at the start make it a challenge to bear down and really crush the final miles.

I think part of my hang-up was that I really suffered last year at the March Madness race.  And I've never run particularly well in Vegas despite the advantages of lower elevation.  So I think mentally I wasn't firing on all cylinders.

Overall I liked the course and the organization.  Packet pickup was easy. Sort of bummed about the shirt but I have a ton already.  The medal is super heavy-duty and unique.  It weighed a ton and was definitely a worth one.

My performance was solid.  Although given the course profile, I figured I'd have a good race.  With nearly 1000 feet of downhill it allowed me to get a decent head start.  In the back of my mind, however, I wonder if I really did run 13.1 miles.  I hope so and the MapMyRun seems to indicate that it is an accurate course.

I'd run this race again.  It was a lot of fun and well supported.  I just hope I ran 13.1 miles and I know my Garmin in this race isn't to be trusted too much. (at least for the first 8.5 miles it was fine).  I like the theme and they have a good vibe here.  If you enjoy desert scenery and downhill running, this race would be right up your alley.
Posted by Eddie Gaul at 8:26 PM