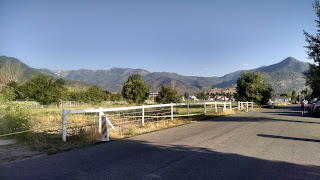 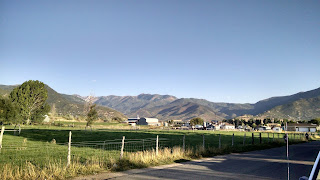 
For the past two years I've done the Swiss Days 10K race located just outside of beautiful Park City, UT.  The race is actually held on the quiet roads of Midway, about 15 - 20 minutes past Park City.

It is farmland and a place where the wealthy buy houses / cottages to get away from the city life of Salt Lake City.

On Labor Day weekend, the city holds its Swiss Days festival to celebrate its Swiss heritage.  It is kind of a big deal and a lot of people flock to the weekend event.

They also hold their 10K race which starts in the downtown area and goes to the west side of the village before returning back to the LDS stake where runners can grab a drink and some gourmet donuts. 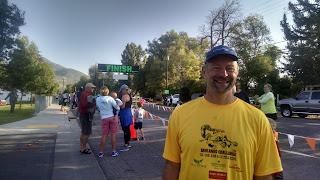 I rolled in at the crack of dawn for the 7 AM race.  I think I got there a hair after 6 AM and I still had to walk a little bit of a way to collect my bib / shirt.  It was easy and they had things pretty well orchestrated.

I wound up chilling in my car and then doing a little bit of a shake out run.  The race, as usual, started on time.

The race starts off with a gentle downhill as you head towards the fairgrounds.  However, the downhill push you get doesn't last long.  You round a corner and pretty much for the next 2.5 miles it is either a gentle uphill or some hills. 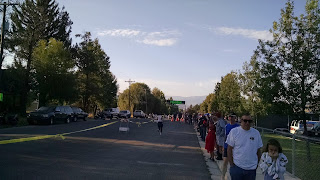 I knew I would get a boost later on so my strategy was just to go as hard as I could as long as I could and hope I could crush it at the end.

I wasn't too shocked to see my first mile clock in at 8:30.  I kept telling myself to be patient and I was getting passed by a lot of people.  The second mile amps of the difficulty as you encounter some of the tougher hills.

The really tough part of the race hits around mile 2.5.  The hills get a lot steeper as you approach the Wasatch State Park Entrance.  However, once you turn around, it is pretty much downhill the rest of the way.

I had been passed semi frequently on the uphill and now it was my time for revenge and to make up some time.  I definitely got a second wind as I made my way down the hill that had just stymied me. 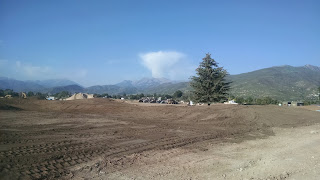 The course is primarily residential (farm land) with some beautiful vacant fields.  The back stretch along the golf course is just stunning, with the back drop of the Wasatch Mountains and a pond.

I was pretty much with the same group of runners almost the entire race.  We'd swap positions but I knew I was making pretty good progress on the run.  After hitting the half way point, though I had another boost where the down hill section really starts to hit home.  I suddenly found my pace dip into the 5K range. 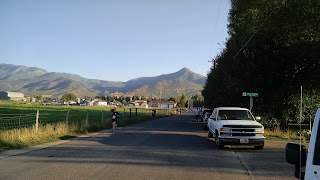 The last mile dumps you onto a walking path before putting you back on the main road.  Traffic is starting to come in to the village at that point but traffic was fairly respectful of us runners.

I dug hard here during the final stretch.  It is primarily flat with one sharp hill that'll take the steam out of you.  However, the last quarter mile or so is a gentle downhill, so you can really push it to the finish.

I crossed the finish line just under 52 minutes! 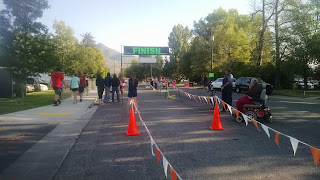 I was pretty happy with myself for finishing as well as I did.  The course isn't an easy one and it turns out I beat my previous 2 year times.  I don't do that very often.

Getting my results took only a bit.  RunnerCard as usual, does a fantastic job getting results taken care of and today was no exception.  I was happy to see that I placed 4th in my age group.  The Swiss Days race is unlike other races where they award runners 5 deep with beautiful glass mugs.  My second one!

Getting the award was as simple as getting a post race refreshment.  Just present your card and bam, you get your award.  No massive fanfare, which I appreciate as well. 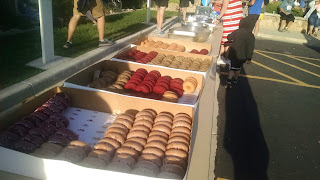 This year's post race food didn't disappoint.  Of course they had the gourmet donuts there, which I totally loaded up on.  I was cautious at first but once they brought out the second batch of them, I totally dug in.  They also had milk and typical post race refreshments.

Believe it or not, I recognized a ton of people from the previous years but I really didn't know anyone.  That didn't deter me from socializing a bit but I took off soon after. 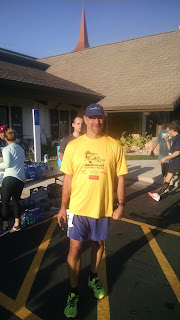 The race cost about $20 and is well worth the time and effort in participating in.  I got a well supported race on a super beautiful course. The post race refreshments and awards were top notch as well.  There aren't many bargains but this one was for me.
Posted by Eddie Gaul at 12:55 PM