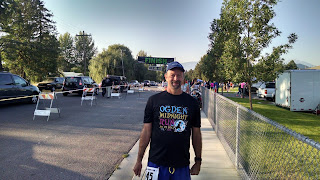 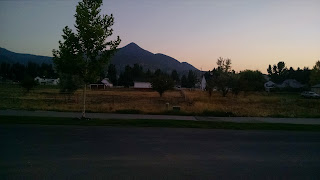 
Last year, I did the Swiss Days 10 KM race and had a really good experience.  The race is cheap: dirt cheap.  I registered a week before the race started and paid $20.  You can't find too many races for $20 anymore....

So I made a mental that when September rolled around that I would do the race again. With nothing else going on, I ponied up the money and decided to see what sort of performance I could muster up.

The race is held in Midway, UT on their Swiss Days.  The town is just outside of Park City the early settlers there were Swiss.  So they have a huge craft fair, food and cultural celebrations.  It is also a bit of a haul -- nearly an hour away.

So I rolled into the bucolic little village around 6:15, after leaving the house at 5:15.  I grabbed my shirt and bib in no time at all.  I managed to kill the 45 minutes by warming up and relaxing.  Luckily, during my warm-up I spotted a construction site and used the porta-pottie there. 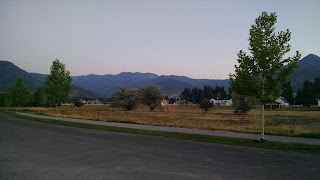 The race started at 7 AM.

I took off ta a fairly conservative pace to start.  The first few miles are a little hilly.  There is a section or two where the hills are "tough" but for the most part, it is just slight inclines or declines.

I hit the first mile at 8:30, exactly where I wanted to be.  I felt pretty good too and while my injured knee had been a little cranky during my warm-up, it was holding up nicely while running.  A friend of mine who I used to beat by a bit when I first moved here passed me just before the first mile marker.  He is in significantly better shape than me right now so I knew I was running the right pace.

The course had changed a bit over last year's, apparently taking out some of the tougher hills.  This year, the course measured up at nearly 6.20 miles as well, compared to last year where it came in at 6:10 or so.

Around the half way point, I was starting to hurt a bit.  The elevation and the hills and a lack of speed training were taking a toll on me.  The back second of the race is also the prettiest as you are running at the base of the Wasatch mountains and a scenic golf course (most of the race is in residential areas).  I was motivated to run hard though seeing the lead pack of runners already making their way back.  Seeing fast runners run fast really helps elevate my game.

I was never alone though and so that helped me keep focus.  I was racing with an older fellow who I thought was in my age group (he wasn't).  I was also duking it out with a few other runners.

I got a huge second wind around mile 4 when I remember that the next mile and a half would be a gentle downhill.  I immediately picked up my pace and felt good.

The last mile is a flat stretch along the back road towards the LDS church.  It is flat here but I was surprised at how strong I still felt.  I usually fade, hard, at the end of the race, but today I had a lot of extra kick to make a final push. 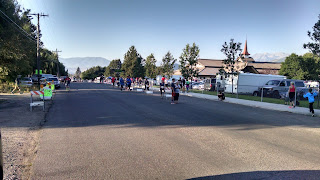 
I had predicted that I would run in the low 50's and my prediction came true.  I was pretty happy with my performance, although it is a far cry from the 41:30's I used to run 10 years ago. 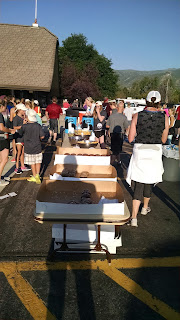 I was hoping I'd snag an age group award; they go 5 deep in 5 year increments.  But, alas, this year, I was out of the running by a few minutes.  They give away super nice, large glass steins (presumably for milk) as age group awards.  I was sad I didn't win one, as I routinely use my 2016 edition.

I wound up socializing a bit after the race and grabbed some food (fruit, premium donuts, Powerade, chocolate milk, and water).  I am constantly amazed that this race is "only" $20 given that you get a nice shirt, an accurate / easy-to-follow course and a generous offering of age group awards.

The course wasn't closed to traffic and some drivers were a bit impatient with the runners.  I didn't have any close calls but you could tell it was upsetting a lot of people.  Most people were good though. 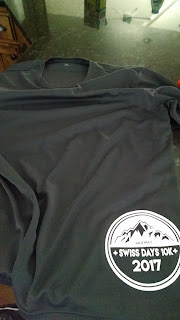 After the race, I met my neighbor for breakfast at the fair.  We socialized a bit and I wound up looking at some of the vendors.  With the good weather, there was a good crowd there.  I am not into buying over-priced "stuff" but it was interesting seeing everything.  I thought about sticking around for the parade, but I had been to it last year and I think it is more geared for kids who want free candy. 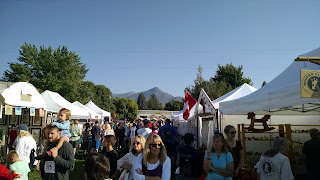 Once again, this is a nice race.  It is very affordable and I like the course.  I will be back next year if it fits into my race plans.