It's been a while since I've posted an update.  My training has been hit and miss.  I've been logging some decent miles but nothing spectacular.  On average I've been hitting anywhere from 35 - 40 miles per week.  Mostly easy miles with a weekend race.  In fact, I've raced at least once a weekend since May.... that's quite a stretch.

All said and told that isn't too bad, but there isn't a lot of structure to it.  I have a full marathon planned in November but I don't seem to have a lot of focus for it.  I am on schedule for it and have managed to get in a few 14 - 15 mile runs in, which have gone okay, but not great.

I like to have a large base of miles going into marathon training.  At least a 50+ mile week or two and I am finding it just isn't there.  My motivation for training also isn't there. 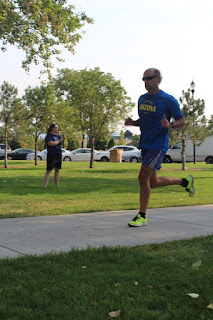 I still love getting out for a run and I look forward to it but doing the actual work for a marathon isn't there this year.  I really sort of think I lost too much of my base in Arizona.  Also, let's face it, I am not having much luck in marathons of late.

Plus, I've been focusing on shorter races.

More than likely I am going to skip the marathon this year.  I will, however, change my entry from the full marathon to the half.  Last year's performance left me with a sour taste in my mouth and lately despite my best efforts at training hard, marathons just haven't been fun.  I still do get a sense of accomplishment out of them, but I am just not getting any better at them and feel that my efforts might better focused to shorter races -- and there are other weekend activities that I'd like to do.

For instance, the training has really worn me down.  In years past, I could do a 16 - 18 mile run and then do something else with my day.  Now, they leave me wasted and spent on the couch.  And one of my pet peeves is loafing around the house -- even if I am supposed to rest.

During some of my long runs, I've been getting more and more clues that if I do attempt the marathon it is going to resemble a lot of what happened last year.

Am I done with marathoning?  Maybe but probably not.  I am sure I'll get the bug to do it again but for right now, the motivation to put in the work isn't there.  I also seem to enjoy smaller marathons.  The Vegas one is just crazy big because it is combined with the half and I feel so insignificant there.

Don't get me wrong, I still enjoy pushing my limits, running and staying fit, but running for 4+ hours and then feeling like a steam roller rolled over me?  No... not this year.