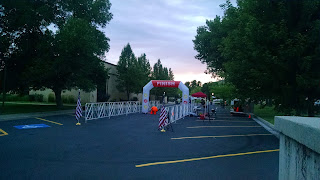 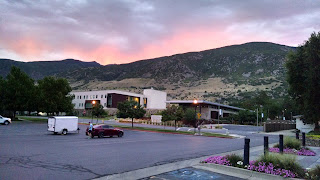 
When I got back to Utah, I immediately hit up UtahRunning.com to see what the local races were going to be.  As per usual, there is absolutely no shortage of races going on here.

I am not really ready for a half marathon, so I was looking for anything in the 5K / 10K range.  Sure enough the Farmington Festival Days race popped up.

When I first moved to Utah, the race was one of the first half a dozen or so races I did and I had nothing but good memories of it.  It was well organized and had an awesome post race breakfast spread.

The race was fairly cheap (I think about $30) so I figured why not...  and I've always wanted to rerun some of the streets of Farmington, as it is a cozy little town with some mature tree-lined streets.

I rolled into the race about an hour early.  I remember last time I was there, finding the race location and finding parking was challenging.  This year, that wasn't a problem.  I found ample parking.  I am also going to go out on a limb and say attendance appeared to be down from other years.  I think the race market is flooded and there were ton of choices to run today.

Either way, I meandered over to city hall and picked up my bib and shirt in no time at all.  The race timer is a friend of mine, so I socialized with him and hid out in my car until about 15 minutes before the race started.

After a bit of a warm-up, the race started at 7 AM. 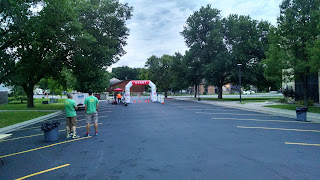 The race initially starts off very discouraging.  You head out a drive way and almost immediately you are greeted with an uphill.  It isn't super long but you immediately begin to question your sanity on why you run these races.  You aren't even into the race and you are already hurting for oxygen.

Luckily, the race levels out and you eventually get a bit of your hill back in subsequent downhills.

I was beginning to panic on the race at the outset.  I wasn't really in the mood to race and I felt like I was getting left behind.  My pace was solid, and I sort of had started in the back, but it seemed like everyone was having no problems with the hill.

I told myself to be patient and that once I got into the groove things would change.

Sure enough, once the hill ended I started making up ground.  I was a bit saddened to see the first mile go by in 8:45.  I was hoping to start off with an 8:30.  But this course was hilly, it was warm and I am still getting re-acclimated to the altitude.

Most of the runners were doing the 5K and they split off from us after about a mile.  I was suddenly looking down Main Street with just a handful of runners.

It was downhill for the time being and I got another boost with a fast downhill that more than made up for the initial uphill.  I was surprised to see I had just run a sub 8 minute mile.  I was hoping that I could hold onto that pace, but it definitely wasn't my day.

I was hurting by the 3rd mile.  We had rejoined with the 5Kers -- they were on their second mile and we were on our 3rd.  We also finally hit a water stop.  There were only 2 this race and I certainly could've used another one.

After another mile we once again separated from the 5K racers.  I was longing to join them when they made their final turn.

I vaguely remembered most of the course and definitely the first mile... as it follows the Handcart Half Marathon final miles.  It was reassuring to be running on familiar ground.

The race eventually led us to the bike trail.  This was the best part of the race for me.  Except for one small part, it was well marked.  The bike trail was heavily treed and I suspect here is where my Garmin lost reception at times.  I was also running solo at this point.  I had passed the folks I was racing against and there wasn't anyone in front of me.  There were a lot of turns and I was worried (a little) about missing one.

I was duking it out with another runner who would pass me and then take a walk break.  I'd over take him and for most of the race we were swapping spots.  I had a hunch he may have been in my age division and while I didn't have a lot of hope that I'd win an age group award, I didn't want to leave anything to chances.  It turns out he and a few others who passed me were in the 50 - 59 age division.  I wound up overtaking him at the 5 mile marker and stepped on the gas to the finish.

The final mile took us back onto the rolling hills of Main street.  The police had cordoned off the important intersections and traffic at 7:45 in the morning wasn't too bad, so we weren't much of a hindrance.  I got a little bit of a second wind in the final mile although I was clearly fading fast.

It was with a huge sense of relief when I finished the race and crossed the finish line. 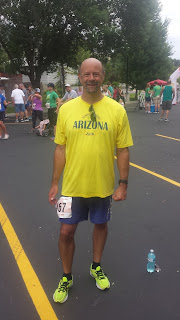 I grabbed some water and walked around a bit.  My shirt and shorts were drenched.  I had dumped one water cup over me to cool me off, but otherwise it was pretty much 100% sweat. By Utah standards it was kind of a muggy morning.  I am just thankful that it wasn't blazing sun.

I wound up socializing a bit and trying to decide if I was happy with my time.  I wasn't beating myself up and my time was about what I expected it to be.  I haven't gotten in many long runs, it was a hilly course, and I am getting used to the altitude again. 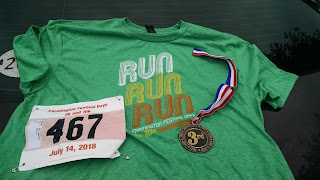 To my surprise, I wound up finishing in 3rd place in my age group (there were only 4 of us).  I was no expecting that. 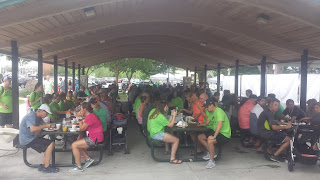 They had a wonderful french toast breakfast at the end.  They advertise as having one of the best post-race breakfasts in Utah and I would agree it is up there.  Definitely worth the price of admission on this one.

The shirt is a cotton shirt.  I probably won't use it much but I like the design.  There were only two aid stations on the course.  I think a 3rd one would've be nice but I survived without it.  Awards and results were done very quickly and in a professional manner.

For the roughly $25 - $30 I paid for the race, I felt like I had gotten my money's worth.  The bathroom situation was fine and even managed to use it minutes before the race. I loved the course too as it offered a lot of variety.  However, it is challenging.  It was certainly good to be back in Farmington.